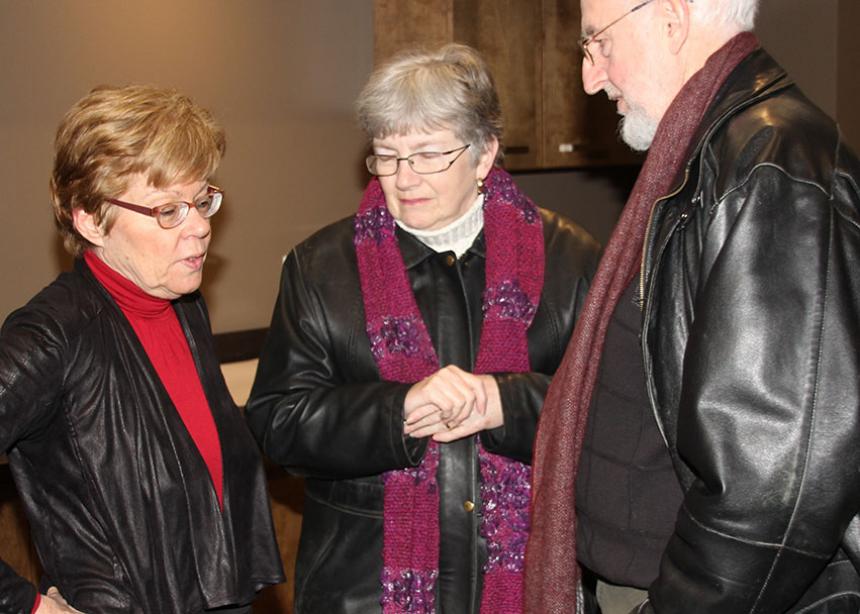 Peggy Mason of the Rideau Institute, left, talks with Nancy and Ernie Regehr after her presentation, ‘Countering ISIL: Why Canada needs to change course,’ at Conrad Grebel University College, Waterloo, Ont., on Jan. 15.

“There is no military solution [to Islamic State [IS)], only possibly some short-term tactical gains that might give the illusion of success, but which pave the way for longer-term chaos, as we now see in Libya. There is no political solution without addressing the underlying local grievances that IS exploits and that will take time and concerted effort.”

So said Peggy Mason, president of the Rideau Institute in Ottawa, whose provocative presentation, “Countering ISIL: Why Canada needs to change course,” on Jan. 15 at Conrad Grebel University College, Waterloo, was sponsored by Project Ploughshares and the Canadian International Council.

Her description of IS is of a politically savvy organization playing its bloody public relations cards carefully. When Barack Obama seemed to not be considering a military intervention in Iraq in response to IS, the terrorist organization upped the ante by beheading a series of international prisoners. This resulted in the U.S. and other western countries, including Canada, to begin a military campaign in Iraq, with some members of the coalition also active in Syria. The main position of IS is that the West is out to destroy Islam, according to Mason, and it needs western military intervention to continue to be seen as the saviour of Islam to its supporters.

“Bombing without a comprehensive strategy with regional players at the core of the solution is a recipe for long conflict and further regional destabilization, the very conditions in which organizations like ISIL thrive and grow,” Mason said,

“You cannot bomb an ideology out of existence,” she countered. “You have to understand its appeal and work to address the huge array of political, social and economic grievances and marginalization that Islamic State exploits to get and maintain local support, without which it cannot succeed.”

The suggestion that one cannot—or should not—negotiate with terrorists is the ideology of the Gulf States, which are the West’s allies against IS. They do not allow dissent of any kind in their lands while criminalizing political opposition of all kinds, she said, suggesting that Saudi Arabia uses the same tactics as IS on opponents—beheading—which fuels the very extremism the West is fighting.

In conclusion, she said, “To delegitimize the Islamic State ideology, we must work to create legitimate governments in the Middle East, which, in turn, means, as an urgent priority, we must work with the Gulf States to introduce incremental democratic reforms. In other words, we must start living up to Canadian democratic values.”

During questions following Mason’s presentation, the issue of IS’s claim to speak for Muslims and Islam was raised. Suggestions included not giving IS that privilege and, instead, calling it a “criminal organization” that doesn’t represent Islam or any valid religious group.

Along that line of reasoning, Bob Nally of Erb St. Mennonite Church, Waterloo, said that Christians feel uncomfortable with calling the Crusades Christian and would not like to have the ongoing drone war being called Christian either. 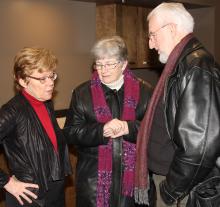 Peggy Mason of the Rideau Institute, left, talks with Nancy and Ernie Regehr after her presentation, ‘Countering ISIL: Why Canada needs to change course,’ at Conrad Grebel University College, Waterloo, Ont., on Jan. 15.