From a closed community to an open heart 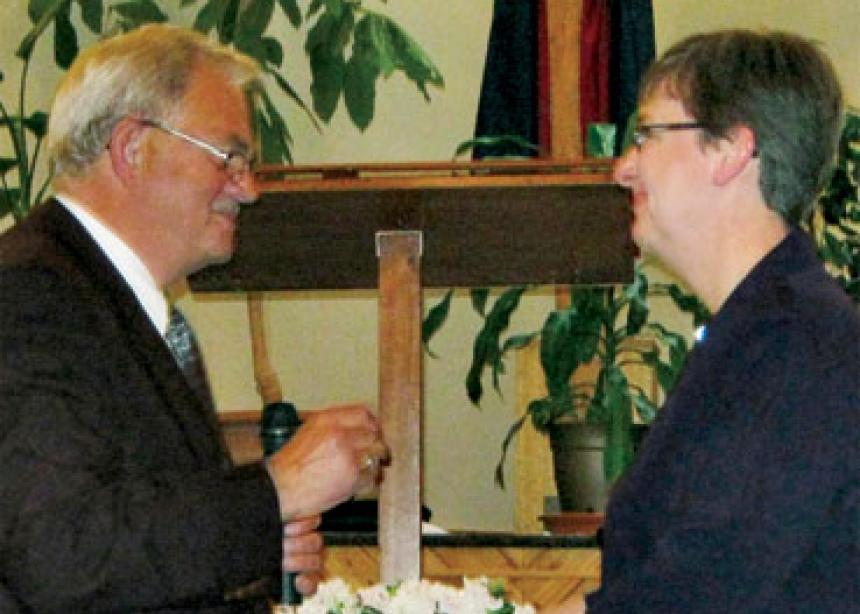 Growing up in a very conservative Old Colony Mennonite home in the 1950s and ’60s, I soon learned that education was not encouraged. Church was meant only to attend. I was to keep anything I heard or learned to myself; the men would sort out what needed to be sorted out. My place was to marry, have children and submit unconditionally to my husband, to leadership and to authority.

I did not respond well to this environment. I was perceived as a rebel early on. Having to help with the family income, I left school at 15. After marrying three years later, and having a new baby at 21, I secretly applied for a mail-in high school course from Toronto and, by the grace of God, I received a letter to say I had passed. This gave me the wings I had been looking for. I had a tremendous urge and longing to learn, and a new feeling of compassion for people was constant in me although I had not a single tool to do this.

Life began to throw me some serious punches. My first husband suffered a serious heart attack at 36, forcing me into the workplace to provide an income. In 1979 I agreed to manage a 154-unit apartment complex. I single-handedly cleaned up the run-down building located in Surrey, B.C.’s most violent neighbourhood, full of drug addicts, prostitutes and homeless people.

By developing and implementing fair rules and living conditions, a respectable place was created in which to live. I cared for the old, the sick, the unemployed, the addicted and the grieving. These included those whom I had worked with and given opportunities to comply with the building rules, but whom I had to eventually evict.

Since I was so involved with the hurting and needy people, and my desire to continue to help them help themselves grew stronger and stronger, I set up a “giving tree” in my home church. Rather than send the needy to the food bank, I involved the congregants, who bought the groceries that were then distributed to the needy families, and I made sure that they knew these Christmas food baskets came from a caring community.

All the while I had to devote increasing care to my husband, who had open-heart surgery in 1981. Being thrown into the unfamiliar medical system due to my husband’s illness, I began to learn more about myself, the medical system, human anatomy, certain illnesses and the great need to study. Through all of this turmoil, we decided it was time to call Rudy Goertzen, pastor of Cedar Hills Mennonite Church, who, with all of his gentleness, grace and kindness, led us through the catechism and understanding of faith in Jesus Christ, and we were baptized upon the confession of our faith in 1982.

Intense palliative care for my husband over the ensuing years took its toll on me. Finally, the medical system took the decision for long-term care for him out of my hands and placed him in an institution, where he died in 2001.

After taking the time I needed to recover and heal from my long journey, I responded to Cedar Hills’ invitation to complement my life experiences with academic studies, an opportunity I embraced with open arms.

In August 2003 I entered Hesston College, Kan., with all my worldly possessions—two suitcases—and a desire and determination to study the Bible more in depth. I asked theological questions and took every opportunity for extra studies during the two-year program, which included a month of study and service in Guatemala; work in a orphanage in Reynosa, Tex., during spring break; clinical pastoral education at Wesley Medical Center, Kan.; and a chaplaincy internship in the Kansas Correctional Institute, a maximum-security prison for men.

My work with victims, which began more than a decade before, had never given me the opportunity to work with offenders, but I had always had the desire to try to help them change their lives of crime. This internship gave me the opportunity to do that, and I found I was changed by the inmates in ways I had not expected. I recognized the immense grief the prisoners were experiencing due to incarceration, as well as past, unresolved grief. Some would never see the outside of the prison walls again and some would never receive a visit from anyone from the outside, as they were either abandoned by family and friends or they did not have anyone in their lives when they were incarcerated. This experience confirmed in me that more contact and communication must be made with those on the margins of our society, especially by we who sit in comfortable pews on Sunday mornings.

Before I left for pastoral ministry studies in Kansas, I was licensed in ministry in preparation for ordination. But as a community mental health liaison worker with the Low German-speaking Mennonites who came to Canada from Paraguay, Bolivia, Mexico and Belize, and then working with my new husband, Helmut Isaak, as spiritual directors in the rehab centre in Cuauhtémoc, Mexico, continuing with my ordination would not have been possible, as being ordained as a woman would have hindered my work with these people.

But with relationships established with the Old Colony leadership and the community, I was able to hold support groups with women who felt strengthened and encouraged after seeing and hearing how I, who had come from the same background as they did, had struggled and triumphed, so they knew there was hope for them also.

Coming to Burns Lake, B.C., was a gift of a whole new experience for Helmut and me. I have relied on Scripture and the Holy Spirit to carry me through, but I also recognize that God sends people into our lives to walk with us on our journeys, and there are so many people who have supported, mentored and held me up when I could not do so on my own.

During the past five years, Helmut, a scholar in Anabaptist/Mennonite theology and history, has given me more insight into my being a woman in leadership than I could have imagined or studied. His constant, patient and gentle teaching that we are all created equal, and constant encouragement that women must be given the opportunity to use their gifts, has helped shape me and set me free to develop and use my God-given gifts.

Now, as co-pastor of First Mennonite Church, Burns Lake, as director of spiritual care in the local hospital and care home, and as chaplain and hospice coordinator in this small town, all of my experiences and studies are gathered together to make me more tolerant and accepting of all cultures, religions and backgrounds, and to serve with more understanding and wisdom.

First Mennonite, with the help of Mennonite Church Canada and MC B.C., is slowly recovering from a very difficult past. The dedicated group of people left in this congregation continue to make a tremendous contribution to the health and rebuilding of the church and its image in the community.

Helmut and I have said, “Where he sends, we will go. For now. it is Burns Lake. Where the next place will be, we do not yet know. But what we do know is that we will serve willingly.” 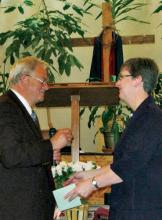