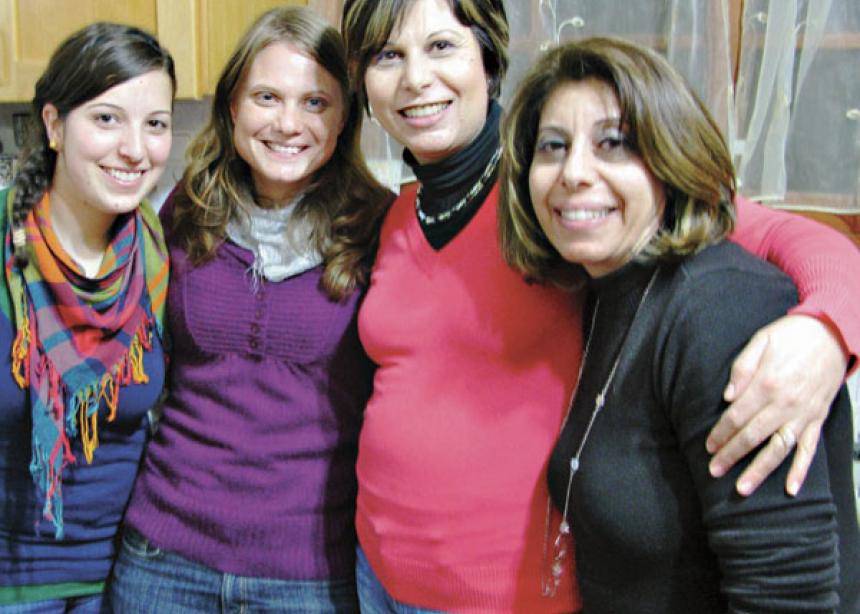 <p>Hinke Loewen-Rudgers, second from left, poses with the Arab Christian family that took her in as their daughter. From left to right: Rajaa, Andera and Eman.</p>

“I felt a very intense homesickness and wanted to go home [to Manitoba] for Christmas. Christmas is a very important holiday to me.”

It was Christmas 2010 and Hinke Loewen-Rudgers had been in Nazareth since October 2008, working through the Witness program of Mennonite Church Canada.

There were certain traditions that Loewen-Rudgers did not want to forego: baking Christmas cookies, decorating a Christmas tree and giving gifts. She had no idea how she would include these traditions in a setting unfamiliar with them. However, an Arab Christian family took her in as their daughter and invited her to experience an Arab-style Christmas with them.

“During my Arabic lesson, my teacher asked me if I would help her decorate her house and tree for Christmas,” she says. “It took us two days.” Under a plastic tree with very ornate gold decorations they placed a large, elaborate and detailed crèche.

Loewen-Rudgers learned that this was an important tradition for Arab Christians. “It was very meaningful for me to be invited into a new culture like this and through this our friendship deepened,” she says.

This was followed by an evening of unplanned cookie baking with a friend of Eastern Catholic tradition. “Christmas cookie baking was not familiar to them,” she says. “I brought my Mennonite recipes and we made perishky and the kids had a lot of fun decorating them with pink icing.”

“The rest of Christmas was spent with the family who took me in as their daughter,” she says. “We decorated their tree and went to dinners with their extended families, very much like I would do with my extended family—a lot of eating and visiting.”

“They don’t give gifts, but everyone gets new clothes,” she says. “Mostly it is a time of sharing and eating.”

Her Arabic teacher found an artificial tree and decorations in her school, and gave them to Loewen-Rudgers.

“It was extremely tall,” she says. “I have never had one that big. I decorated my house and made it available to other volunteers while I was away Christmas Day with my adopted family.”

Loewen-Rudgers could not have anticipated that her Christmas in Nazareth would meet all of her expectations and hopes. “A bunch of little things contributed to a meaningful and perfect Christmas,” she says. “God was providing and leading.” 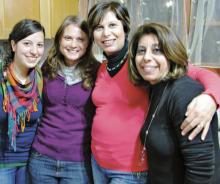 Hinke Loewen-Rudgers, second from left, poses with the Arab Christian family that took her in as their daughter. From left to right: Rajaa, Andera and Eman.