“If we don’t go along with the decision, it makes us (Canadians) look like spoilers and that doesn’t feel good,” says Tom Yoder Neufeld from Formation Council of MC Canada 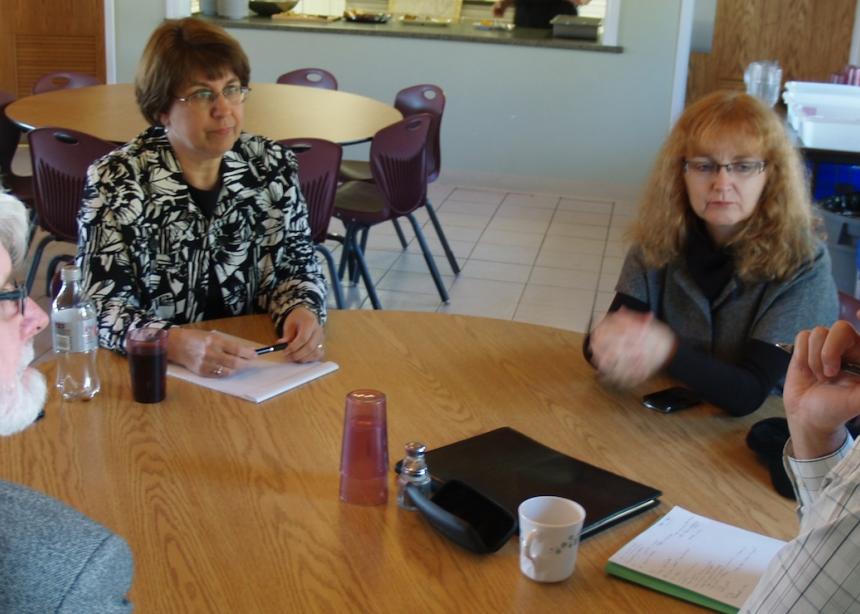 Coming down off the mountaintop of excitement about a proposed merger

of Mennonite Publishing Network and Third Way Media, members of MC Canada’s Formation Council looked the issues squarely in the eye of dislocation for persons losing their jobs, feeling blindsided about the decision and grieving about the possibility of losing its office in Waterloo.  Also uncertain was the financial viability going forward.

“If we don’t go along with the decision, it makes us (Canadians) look like spoilers and that doesn’t feel good,” said Tom Yoder Neufeld from Formation, reflecting the sentiments of the Canadians who appeared caught in a conundrum of feeling positive about the synergies in producing new media while feeling “out of the loop” in the decision-making process.

“MPN has a history of working and producing bi-nationally, but Third Way doesn’t,” he further elaborated.  To have the new entity located in Harrisonburg, Va with a yet-to-be-named CEO and a retiring MPN CEO gave the Canadians considerable pause about how much the new media products would reflect the Canadian culture and theology.  “It will be far enough removed as to be off our radar,” said Pauline Steinmann from Saskatchewan.

Responding to their trepidation, Bontrager admitted that the process of shaping a new organization will not only be “clumsy” but also complex, all the while assuring the group that the MPN board will “reach out intentionally” to make Canada feel ownership, a move he says will have to be “nuanced” to satisfy the stakeholders.  He was firm, though, that the present three (Canadians) to five (U.S.) composition of the MPN board will remain in place, the organization to which the new merged entity will be accountable.

From some of his other work bi-nationally, said Campbell Nisbet, from Ontario, this kind of proportion in governance “tends to weaken the contribution of the minority and goes in the ‘dominant’ direction.”  He called for an effort to tap the “creativity of Canada” with the new entity.

“I find that rather inflexible stand (on composition) a little concerning,” said Carr-Pries in processing the proposal with Formation members after the MPN/Third Way dialog.  “Will there be a Canadian hired for the staff in Harrisonburg?” Vic Thiessen, executive secretary of MC Canada’s support services, wanted to know. To which Hartzler responded, “we hadn’t thought of that.”

Reviewing the financial structures of the merging media entitities, Earl Reimer, MC Canada’s General Board representative from Manitoba on Formation, asked about the physical assets and who is holding title to the real estate.  The empty building shell at Scottdale, Pa. “is on the books at an appraised value of $600,000,” reported Rempel, but with a slow real estate market and its location in a rural western Pennsylvania community, “we will take almost anything for it!”  He said the MPN board is open to offers.

Third Way Media has a building in Harrisonburg with a studio and warehouse with half of its space occupied by staff and is owned by Mennonite Mission Network with a market value of $1 million, according to Lowell Hertzler, interim co-director, who says title will pass to the new owner of the merged organization.  “It is ideal space for producing and distributing products of the new organization.”

In the current fiscal year, MPN expects revenues of about $3.2 million from the sale of books, curriculum and other items, an estimated 17 percent of which are Canadian sales, while Third Way Media expects just over $532,000, from grants, donations and sales.  In 2009, MPN reported a budget shortfall of approximately $149,000.

Since Third Way Media, located on the edge of the campus of Eastern Mennonite University, has been a department of Mennonite Mission Network, located in Elkhart, Ind. for more than 50 years, MMN has pledged $194,000 a year for the new organization to facilitate the integration, especially during the first five years.

Canadian members now serving on the MPN board are: Abe Bergen, vice-chair, from Winnipeg, Joan Pries of Kitchener, and Dan Jacks, treasurer, from Calgary.

After discussing accountability issues and giving suggestions as to which Canadian communication persons might be considered for staff in the new organization located in Harrisonburg, Formation council members agreed to draft a recommendation for MC Canada’s general board which meets later this fall to consider the integration proposal.

Formation has also asked to be a part of a yet-to-be created reference group, made up of MPN and MNN boards, to help shepherd the integration process.

As a former staff member of Third Way Media, and a Canadian who's lived in the US since '95, I've got a variety of thoughts on this. I'm no expert on the CDN parties in question, but have some knowledge of the US side (inside TWM until a couple years ago) and outside/personal friendships with some of the MPN staff. I'm concerned that there continues to be so many examples of processes with the national church structures that leave not just casual pew-sitter voices but also interested/affected parties and even staff feeling like they're outside/unheard during formative stages of such significant/foundational change. Clearly significant thought/time/discernment has gone into this merger in particular, yet I am reading about folks feeling disenfranchised. How is this sort of work so hard to do well (or at least better)?

But more than just my concern, I am also hopeful that this new venture proves fruitful, and that the parties can work toward restoration of bi-national relationships and collaboration. I hope that this merger leads to renewed vitality for the work these organizations are about, and rejuvenates their expression of Anabaptist voices within the Mennonite Churches and the wider societies.