From Amish settlement to the Gates Foundation 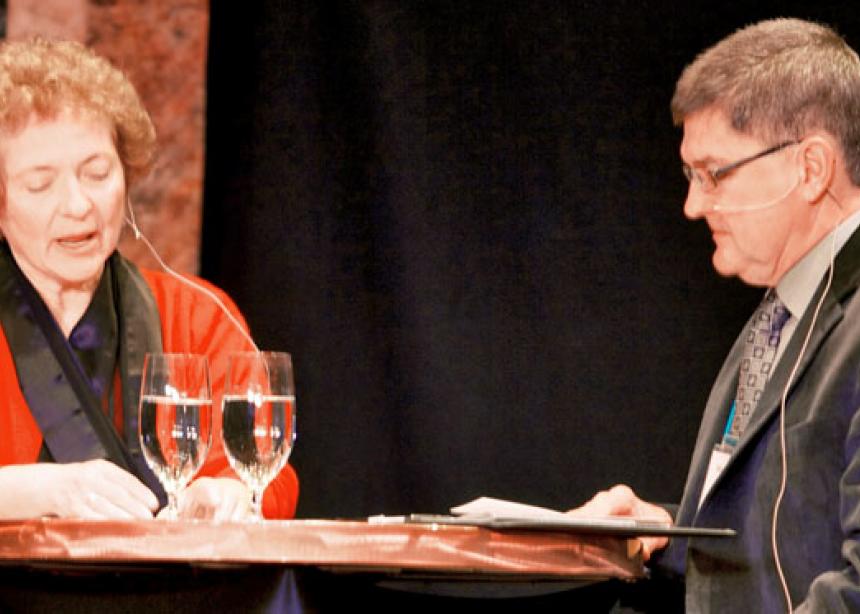 More than 500 Mennonite Economic Development Associates (MEDA) convention-goers were entranced as Joyce Bontrager Lehman recounted her journey from an idyllic childhood in the Amish settlement of Kalona, Iowa, to international development work in Kabul, Afghanistan, and beyond.

Bontrager Lehman built on the convention theme, “Enduring values: Lasting impact.” She credits her mother’s influence in persuading her father to allow her to go to college, which opened the door to an early career in teaching before becoming an accountant. A casual conversation with friends brought her to MEDA.

“It’s fair to say that casual conversation changed my life, and the opportunity that grew out of it cannot be overstated,” said Bontrager Lehman.

She joined MEDA first as a member, then on the board of directors, and a few years later, on staff. She is now a program officer with the Bill and Melinda Gates Foundation.

MEDA’s impact not only on the 20 million families served last year, but on its staff, too, was underscored by Julie Redfern, MEDA vice president of financial services, and by Veronica Herrera, chief executive officer of MiCredito, MEDA’s microfinance partner in Nicaragua, at the association’s annual general meeting that was part of the early November convention.

“My 15 years at MEDA have profoundly shaped my life,” said Redfern. “I ‘grew up’ at MEDA . . . influenced by people known for their generosity, support, friendship and professional guidance.” She added, “I learned about giving from a poor woman in Lesotho [a landlocked country surrounded by South Africa], who shared her scant lunch with me. When I visited clients and staff in Haiti shortly after the [2010] earthquake, I saw faith and hope from a new perspective. And from Afghan women microfinance clients, I learned strength.”

Redfern introduced long-time colleague Herrera, who credits MEDA for not only helping her personally and professionally, but also Nicaragua, the second-poorest country in the world after Haiti.

“MEDA has taught me many values, as well as the passion to serve the most needy people,” said Herrera. The daughter of poor farmers who barely had money to buy her one pair of shoes a year, she credits MEDA for “the opportunity to provide my children a better education than I had. . . . MEDA has impacted Nicaragua by bringing financial services to 20,000 micro-entrepreneurs in rural areas. MEDA is one of the most reputable and prestigious organizations due to its strong commitment in Nicaragua and its deep integrity, pacifist beliefs and human values.”