‘Jesus is with us’ in our creation-care efforts 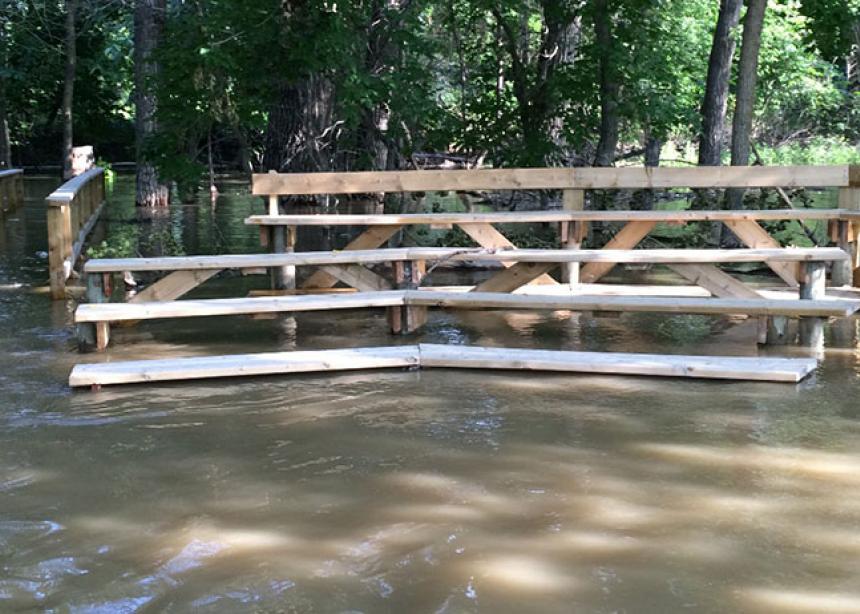 “Last year, Mennonite Church U.S.A. passed a resolution on creation care at its Phoenix assembly. Is it time for [MC] Canada to have a resolution as well, and, if so, what should it look like?”

Joanne Moyer, a member of the Mennonite Creation Care Network Council (www.mennocreationcare.org.), a ministry of the two national churches that provides resources and leadership in this area, posed this question at her seminar, “Creation care: Testing our resolve.”

Mark Bigland-Pritchard of Osler (Sask.) Mennonite Church thought it should. He introduced a resolution entitled “Implications of the gospel for action on anthropogenic climate change.”

Backed with scientific data and biblical injunctions to “protect and nurture the earth,” and to “love our neighbour as ourselves,” the resolution calls on MC Canada to “urge its member churches to study the findings of climate science, to consider the implications, to explore the meaning of climate justice and climate responsibility in their own contexts, and to prayerfully consider how best to reach out to the victims of climate change and how best to rapidly reduce the greenhouse gas emissions for which they are responsible.”

It also calls for the “General Board to establish a framework whereby the denomination, member churches and individual church members may receive advice from experts on the best options for responding to the climate crisis in their own context.”

The General Board felt it needed more time to study the resolution before bringing it to the delegate body for a vote.

Earlier in the year, the General Board received a request from the Fossil Free Menno group (www.fossilfreemenno.org) calling on MC Canada to study the issue of divestment from the fossil-fuel industry. This request was folded into Bigland-Pritchard’s resolution.

During her seminar,  Moyer gave a brief history of the steps MC Canada has taken in regard to creation care. The earliest resolution was “Christian stewardship of energy resources,” adopted by the General Conference Mennonite Church in 1977.

In 1989, the “Stewardship of the earth resolution on environment and faith issues” led to the creation of the Mennonite Environmental Task Force, which was the forerunner of the current Creation Care Network.

The Confession of Faith in a Mennonite Perspective, with several articles that speak to creation-care issues, was adopted in 1995.

In 2007, MC Canada’s Faith and Life Committee presented an affirmation statement “to commit ourselves to discern a path of faithfulness to be good stewards of the earth.” At that same assembly, a “Green assembly resolution” to make national gatherings as green as possible was passed. In response, the Creation Care Network put together a set of green guidelines.

And two years ago in Calgary, a motion to reaffirm the 2007 resolution was passed because some of those guidelines were not being followed.

Participants in Moyer’s workshop were not short on ideas for congregations and the wider church. Several expressed a wish for the church to take more ownership of the issue and “put environmental concerns ahead of money and profit.”

“We need more education in our churches and more open conversation on the issue,” was a comment that came from one of the groups. “The churches should certainly be involved in and promote fair trade, reducing, reusing and recycling.”

Many suggestions for things churches can do came out of the small-group discussions, including making church buildings more energy efficient, providing education, and advocating for better practices and lifestyle choices. The consensus was that Scripture calls Christians to nothing less than caring for what God has created.

In consultation with assembly planners, Moyer completes a creation-care audit after each assembly she attends. Without having completed her 2014 assembly audit yet, Moyer said planners had worked hard at reducing paper and she encouraged the use of electronic devices such as tablets. “It does, however, raise the question of electricity use,” she admitted.

People were encouraged to bring their own water bottles and coffee cups, and MC Canada provided recyclable coffee cups, but, she noted, “the compostable paper dishes and plastic cutlery were not separated from other garbage, and so I can only assume they will be going into the landfill site.”

Moyer gave a meditation at the July 5 evening worship event at Camp Assiniboia. “Because we are connected, because we are people of faith,” she said, “we must keep caring and searching for solutions. . . . No matter what the dire forecasts and gloomy reports tell us, Jesus is with us, and therein we can find hope, the hope we need to carry on and to meet all the struggles and storms that assail us with courage, hard work and faithfulness.”