‘The ministry of war’

When office conflict comes to an impasse 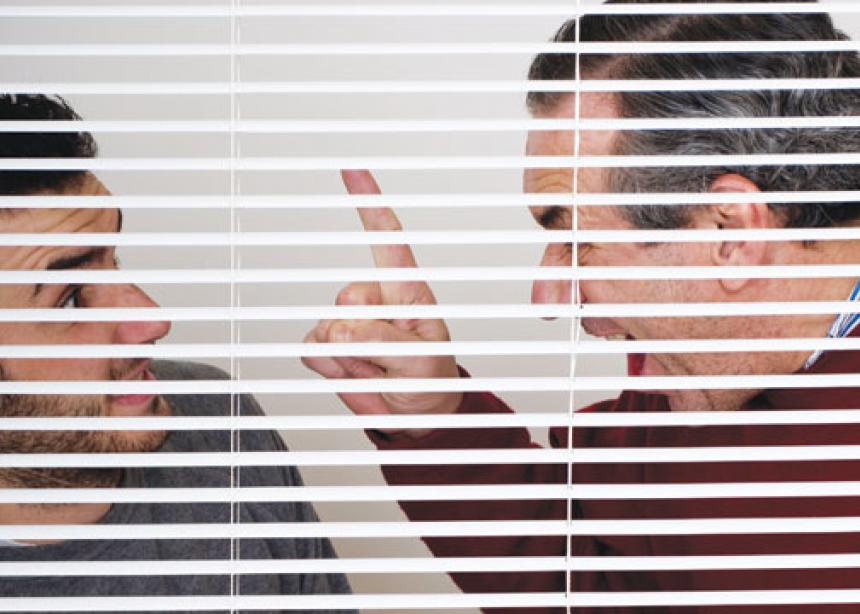 Pastor Epp (a pseudonym), finding himself in conflict with his church board, became increasingly depressed. Sharing his emotional ill health with the board, they arrived at a compromise about the number of times he should preach. Or so he thought.

Agreeing that there were enough good speakers to cover for him, he rested gratefully in the fact that he was given time for treatment and renewal of spirit before ending his contract. But, in a surprise move, the board then reneged and demanded that he preach every Sunday until the last day of his ministry.

Confused by the mixed message, he sought the counsel of the area minister, who distanced himself with the rationale that he didn’t want to interfere with the congregation’s autonomy. Epp was told, rather, to seek legal counsel. When the pastor did just that, the issue rose to higher levels, with the result of another mixed message from the conference moderator, who told the pastor that “his was the greater sin” for going the legal route, rather than trying to resolve the conflict inside the community of faith.

Epp became progressively ill and unable to deal with the situation. Threats and accusatory comments were made about his character by the board of the church, alluding to a charge that he stole church property without specifying, however, what was stolen.

To this day, the conflict has not been resolved. Epp continues to suffer from crippling depression and anxiety. Most church members deserted him; only a few maintain contact.

Such a scenario is all too familiar to Dean Peachey, a mediator and coordinator for the human rights and global studies degree program at Global College at the University of Winnipeg, Man. He calls such conflict the “ministry of war,” saying that such conflictual disruptions in the life of a congregation are often a result of “fuzziness about polity.”

The good news, he says, is that there has been an “attitudinal shift” away from an authoritarian view of conflict, as was prevalent with a former bishopric structure when such behaviour was indeed considered “sinful,” to an increasing acceptance of different holistic perspectives.

What is at play generically in the Epp case, says Peachey, are the lack of guidelines and clarity about how decisions are made; who makes what decision—the church council, the congregation or the pastor; how involved the congregation gets in issues—whether they vote or use consensus.

There is still a prevailing attitude that Christians deal with these things differently in the faith community than outside, that there is a kind of congregational pride that says these conflicts should be contained within the “body” and not become messy and public.

Then there is the related issue, evident in the Epp case, of the injured party getting redress. What are the pastor’s legal rights as an employee if the final decision is dismissal? And what are the legal and ethical procedures for a congregation to take when this is the final outcome? Labour laws in the workplace dictate that the employer go through a painstaking process of evaluation, warnings, a timeline to improve and meet expectations, before taking the final action of dismissal. And then there is the issue of severance pay to give time for the person to find another job.

Much of this is often ignored in church disputes, says Peachey. A remedy is the formation of a pastoral relations committee, especially necessary in a team ministry. These committees do regular evaluations and establish performance guidelines as well as develop a roadmap for dealing with conflict, should it occur during the time of a pastor’s contract.

A typical scenario these days for potential conflict in a team ministry, he further elaborates, centres around differing musical styles in worship. A conflict develops, for instance, between the senior pastor and the associate pastor of music. Pressured by some congregants that the music used in worship is not appropriate, the senior pastor complains to his board or council. The council, not wanting to wade into the conflict, says the pastor “needs to make a decision about the music associate.”

Caught between some dissatisfied members of the congregation and an obstinate associate, the senior pastor summarily dismisses his associate, thus starting another version of Peachey’s “ministry of war.” Congregants take sides and the conflict breaks into open warfare. Nobody wins; everyone, in the end, loses.

All of which could be avoided, Peachey says, if things were handled in a more forthright manner, using pre-determined guidelines in decision-making and how conflicts are handled. While grateful for the shift away from authoritarianism, Peachey observes that Mennonites, in particular, have not fully replaced it with anything else that is more wholesome and productive.

Conflicts are not confined to Mennonite congregations.

A respected residential care facility for seniors suffering from Alzheimer’s disease, dementia and other degenerative diseases, has recently experienced a sudden exodus of high-profile employees, especially those in management.

Eight senior staff members, including two board members, some with long careers at this facility, have resigned over a two-year period.

Although the chief executive officer of the facility hopes to meet its mission and values, while at the same time providing the “best possible care, support and encouragement for the folks who live here and the folks who work here,” many have not felt either supported or encouraged.

When a new senior manager was hired, according to a former employee, the facility that was once considered a supportive, faith-centred organization seemed to go in the opposite direction. A new management style seemed to diminish good relations with employees and a partnership with pastors in offering counselling.

The new manager saw it differently, however. “When an organization is going through a lot of change, sometimes those things are not upheld as much as they should be. Sometimes people don’t perceive that they are, because some decisions are difficult ones, particularly if there is a great deal of financial pressure that is prompting you to make some changes,” he said. “Our organization, as well as many other health facilities, is going through some tough times.”

As a result, though, many employees perceived that their work wasn’t valued, feeling themselves trapped in bringing their concerns to management. One employee, resigning after working for 17 years, felt her job would be at stake if she went over the manager’s head and took her complaints directly to the board, one of whom dismissively said, “We are very aware that conflict resolution doesn’t always work.” He regretted that “if we don’t have unions, the employees get taken, one by one.”

In a Mennonite college setting, a respected music professor with a background in conducting, left five years ago after teaching for 20 years, when he was unable to resolve a conflict involving the type of music he used on choir tours.

He knew his work was a delicate balancing act in working with different opinions about types of music among faculty and donors, and meeting the demands of his teaching responsibilities, conducting choirs and organizing college concerts. He got used to his work coming under criticism.

But after a particularly successful choir tour, he was brought into the president’s office to speak with him and the academic dean, who asked him to stop doing jazz and start doing contemporary music.

“I was pumped and gung-ho! We had just set a benchmark,” he recalled. This incident led to similar conversations about his repertoire selection, resulting in his becoming very depressed.

The level of criticism rose with him as he listened to comments like “the work you did for this concert was a waste of time.” Malicious conversation between administrators in front of the faculty about his ability to lead the choir and choice of repertoire led the professor to feel hurt and unsupported.

Sometimes the professor would receive positive feedback, but then he would question if the administrators really liked his work, if they were telling the truth, or when the next negative comment would come.

“It was like waiting to be hit,” he said. “I had put my heart and soul into [these concerts]. . . . It was like being kicked in the head [every time they evaluated my work negatively].”

He left his position five years ago due to the stress. Some of the faculty and staff members were concerned about the circumstances surrounding his departure.

According to the current president, who has been in his post for four years, “Typically, we try to resolve the conflict first, and then mediation is probably one of the next steps.”

Mediation was not a step in this conflict, however, as the professor was employed prior to this president’s posting.

The value of mediation

While not referring to any of the cases presented in this article, Nan Cressman, director of Conciliation Services of Canada, Kitchener, Ont., says mediation is not particularly helpful in working through the causes of a conflict, but is instructive for the present and future.

“Interpersonal healing can take place through mediation” she says, “because the mediator can achieve a balance of power between the conflicted that can bring learning to future situations. As a third-party observer not invested in the outcome, the mediator, through skilled communication techniques, can help each party see the other’s point of view and focus on the ‘light of learning,’ rather than assigning blame.”

Congregations and Mennonite organizations have resources for both conflict prevention and sets of guidelines provided through the offices of Mennonite Church Canada, although Karen Zimmerly Martens, denominational minister, insists that they are not “police, not enforcers,” but rather resource persons who can help guide congregations, rather than “solve their problems for them.”