Zoom baptisms in a time of pandemic 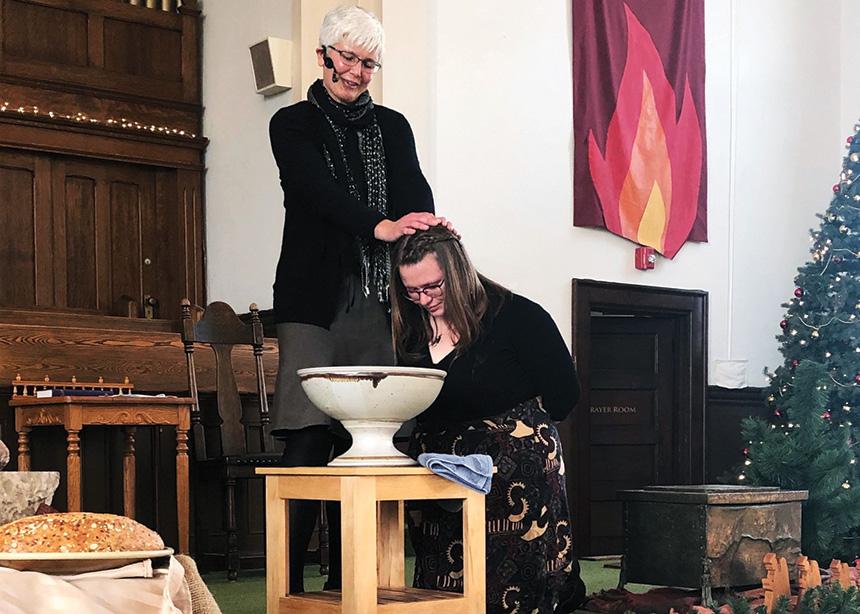 Mackenzie Nicolle was baptized by Pastor Judith Friesen Epp at Home Street Mennonite Church in Winnipeg, a year ago this month. She waited until Manitoba’s public-health restrictions were temporarily loosened to be baptized. The province went into a full lockdown the following month. (Photo by Brenda Suderman)

In a time when hope was hard to find, expressions of faith became even more significant. As a ritual necessitating proximity and touch, baptisms were something Mennonite churches across Canada struggled to maintain and accommodate within the public-health restrictions of the COVID-19 pandemic. In the uncertainty of the pandemic, however, committing oneself to faith through baptism became an act of hope worth the accommodation.

“There was a stretch there where I was thinking, well, in the spirit of Anabaptism, we could get on Zoom, and ‘I’ll baptize you, you baptize me,’” says pastor Phil Campbell-Enns about baptisms happening from home. “Realizing that people are leaning on their faith to get them through this time, why don’t we lean on it all the way?”

Campbell-Enns and Judith Friesen Epp, co-pastors of Home Street Mennonite Church in Winnipeg, conducted three baptisms within the stricter provincial public-health restrictions of the pandemic. While all of these baptisms were able to happen in person at the church, the “faith conversations” the young adults participated in before their baptisms were held over Zoom.

The pastors organized these conversations in March 2021, when they realized their congregation included an especially large group of young adults interested in baptism. With no sure end to Manitoba’s public-health restrictions preventing group gatherings in sight, these young adults were invited to discuss faith-related topics with guest speakers online.

“We wouldn’t have been prepared to do that in the first two, three months [of the pandemic],” Campbell-Enns says. A year of making similar adjustments, however, made this online gathering seem almost normal.

In fact, he says the online format of these conversations allowed more people to participate than an in-person format.

“Four years ago, if somebody had suggested it, . . . the idea would’ve seemed ridiculous,” he says. “Now it’s still not ideal, but I think we would still use it as a supplement.”

Once three of those participating in these online conversations decided they wanted to be baptized, they were faced with the difficulty of establishing a date for their baptisms in an unpredictable future.

“There, the pandemic just required a pile of flexibility,” Campbell-Enns says.

Mackenzie Nicolle, one of the three baptismal candidates, waited for restrictions to lighten temporarily to be baptized. Nicolle, then 25, was able to gather with close friends after her baptism, but travel restrictions meant her parents and grandmother watched her baptism online from their home in Saskatchewan.

“That was actually a lovely part of having it on livestream,” Nicolle says. “That probably wouldn’t have been able to happen in a non-pandemic time.”

For Nicolle, the pandemic contributed to her decision to get baptized in the first place.

She says that, while many people found attending church by Zoom difficult, working on Home Street’s technical team to facilitate this online worship allowed her to feel more connected to the church than ever before. It also gave her a sense of grounding overall when she needed it.

“For so long I wasn’t able to go anywhere,” says Nicolle. “I didn’t go in any houses for six months. I was in my apartment and one other friend’s apartment, and that was it. But then every three weeks, I got to go to church. . . . Home Street continued to be, physically, a home.”

A few months after joining the technical team, she accepted the invitation to partic- ipate in the “faith conversations” open to those interested in baptism. When determining the topics they would cover in these conversations, Nicolle voted for “doubt.”

“Part of why I didn’t get baptized prior to the pandemic was I often felt like I needed to know, and be certain, in everything,” she says. “I was already starting to understand the mystery of things, and that it was okay to not know.” The unpredictability of the pandemic “really brought that home.”

“That maybe was also part of the reason I didn’t wait until after the pandemic to get baptized,” she says. “I just felt like I was surviving, and this felt like something I could choose. . . . I didn’t always feel like I could choose a lot of things during the pandemic.”

Although Home Street is now able to worship in person once more, Nicolle says she sometimes misses the clumsiness that came with worshipping online.

“I would think how this feels like God’s work being done, with everyone trying to do it together, but it not quite working,” she says. “But also, we’re trying our best, so that became meaningful.”

Mackenzie Nicolle was baptized by Pastor Judith Friesen Epp at Home Street Mennonite Church in Winnipeg, a year ago this month. She waited until Manitoba’s public-health restrictions were temporarily loosened to be baptized. The province went into a full lockdown the following month. (Photo by Brenda Suderman) 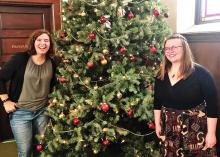 Natasha Neustaedter Barg, left, transferred her church membership on the same Sunday morning that Mackenzie Nicolle, right, was baptized at Home Street Mennonite Church in Winnipeg in November 2021. The two enjoyed collaborating on the choosing of hymns that were sung during this service.