‘Won’t you be my neighbour?’ 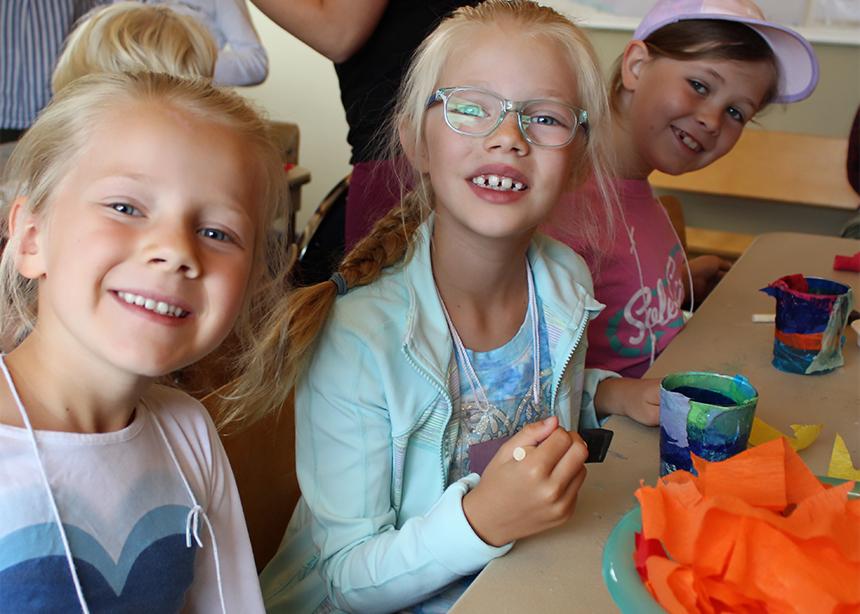 Presbyterian minister Fred Rogers asked the question, “Won’t you be my neighbour?” every day for almost 40 years on Mr. Roger’s Neighbourhood. In the 2018 documentary of his life, Rogers says that asking this question is “an invitation for someone to be close to you.”

Over the years, this relationship between the two Mennonite Church Alberta congregations has blossomed, as Foothills has worked with its Chin neighbours on various projects. Brenda Tiessen-Wiens, a member of Foothills and moderator of MC Alberta , has been tutoring Chin church members in English for the past seven years. “This has resulted in being invited to weddings, house warming parties and barbecues,” she said.

While many churches in MC Alberta no longer host VBS programs due to lack of volunteers, Foothills has a healthy program, as a third of the VBS leaders and kids now come from the Chin church. This year, the joint program was held from July 2 to 5. A third of the kids came from Foothills and the other third came from the local neighbourhood, with a total of 45 kids in attendance. The Chin church rents a bus each year to transport the kids across town.

Chad Miller, the Foothills pastor, said that, in the beginning of the friendship, Leng Nawn Thang, the Chin pastor, would attend planning meetings at Foothills. This year, Miller was invited to plan the program at Thang’s home, where they drank coffee and ate fried bread and sweets together.

Thang said the VBS program is great to do together. “The kids are on summer holiday with nothing to do,” he said. “It’s a chance for Christians to get together, get to know each other and get to know the Word of God together.”

In the past, the two churches used the Group curriculum, but this year they decided to try the VBS curriculum produced by MennoMedia. The theme was, “Who is my neighbour? Learning to love like Jesus.” Children and youth who attended the program got to see firsthand how two different cultures can live out their faith as neighbours who love and support each other.

Props included street signs; the Compassion café, where kids could get snacks; and a row of houses resembling a neighbourhood. Each day, someone would knock on a door and out would come a new neighbour to meet. One day it was Thang, who shared about having nice neighbours in India and then in Canada. On the last day, two refugees from the Calgary Newcomer Centre, which was started in 1988 by Mennonite churches in Calgary, answered the door and shared their stories. The centre was presented with $400, the total offering collected each day of the VBS program.

At the end of the week, after having tried the new MennoMedia VBS package, Miller said, “The Group VBS curriculum was appealing and more contemporary, but not quite as good theologically as the MennoMedia version.” The worship music had mixed reviews. Regardless, both churches are eager to work together again.

Now that the summer week of fun and faith has come to a close, the colourful props have been disassembled and donated to a local community dance studio. That means, as Mr. Rogers likes to say, “It’s a beautiful day in the neighbourhood!” 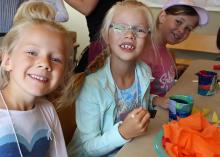 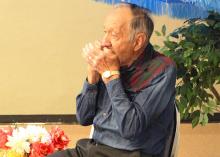 John Wiebe serenades the children with his harmonica during snack time at the Compassion Café. (Photo by Ainsley Dunn) 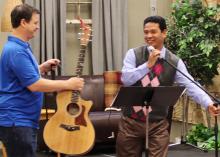 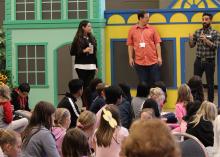 Pastor Chad Miller, centre, introduces new neighbours Rabah Swaidek, left, and Mohammed Awada from the Centre for Newcomers in Calgary at this year’s VBS program, ‘Who is my neighbour?’ (Photo by Ainsley Dunn)