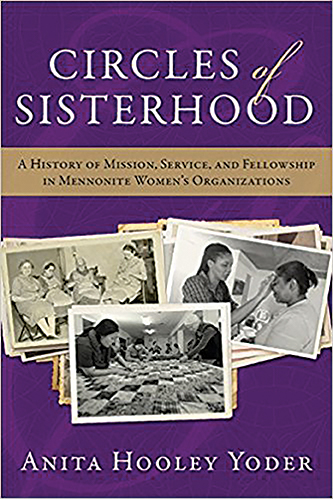 The golden age of Mennonite women’s organizations in Canada and the United States came in the years between 1940 and 1970, writes Anita Hooley Yoder in Circles of Sisterhood. In both the Mennonite Church and the General Conference Mennonite Church, women were highly involved, getting together to work at sewing projects on a monthly basis. Many congregations had several groups arranged by age, including girls.

The motivation for all this activity was mission and service, but fellowship was always an important factor. Like in other denominations, Mennonite women first organized to support missionaries overseas and to help the poor in North American cities, but as needs increased during the Second World War, they ramped up their output. When relief sales were organized, it was the women’s groups that provided many of the donated items and a significant part of the labour.

The earliest recorded Mennonite women’s sewing circle in Canada began meeting in Gretna, Man., sometime before 1900, but it was many years before Manitoba had a provincial organization. The (Old) Mennonite Church congregations in Ontario were slower to get started, but sewing circles expanded rapidly in 1917, when a women’s missionary society was organized within the denomination.

The number of women’s groups declined through the late 1960s and ’70s. Sewing remained important for some groups, but others began to emphasize Bible study and women’s spirituality. Women’s retreats became popular activities, and the broader organizations began to support women studying theology.

Mennonite Women Canada became an organization separate from the U.S. in 2000. While sewing —mostly quilts and comforters—continues today, the churchwide women’s organization tends to put its focus on spiritual growth and fellowship.

While Hooley Yoder does give an overview of all the work done by women, she devotes most of the book to descriptions of the changing role of women. In the early years, some groups had to have a man open their meetings with prayer, but over time women developed leadership skills that they came to use in other church settings. The author writes from a feminist perspective, describing in detail the occasions when male church leaders seemed to disrespect the work of women.

As a person who sews, I wish the book had more detail about the amazing amount of material aid that must have been provided by Mennonite women’s groups over the years. The author tends to gloss over the clothing that was sewn and mended, the quilts and blankets made, the meals catered and the many other ways women carried on the work of the church. She gives extensive coverage to the process of women acquiring recognized leadership positions in the church, but her tone towards those who continue to get together to sew is almost condescending.

The book ends with an honest reflection on the future of Mennonite women’s groups. Hooley Yoder is not confident that they will continue but recognizes that they are striving to be relevant for the women of today.