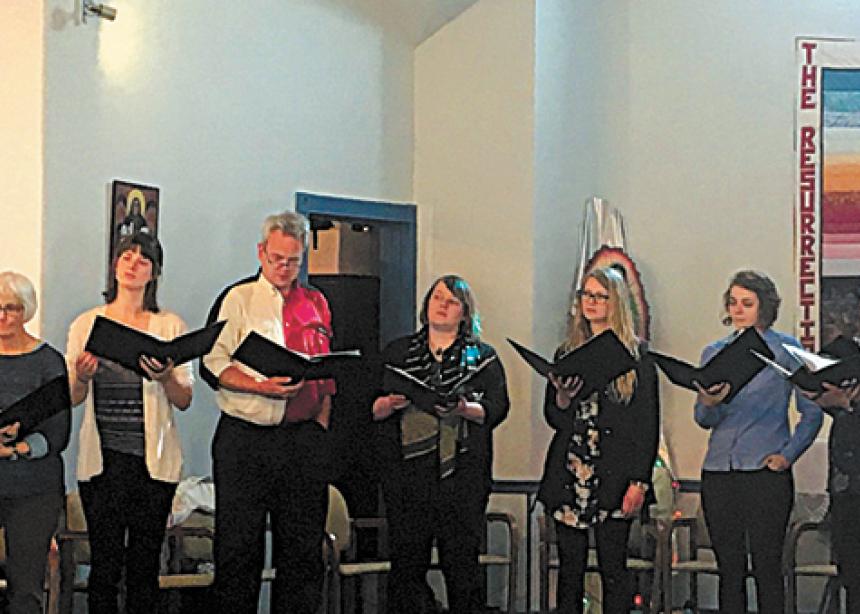 Ben Pauls of Zoar Mennonite in Waldheim, Sask., leads an ensemble of 15 singers from a number of MC Saskatchewan congregations during a joint worship service at Muskeg Lake Cree Nation on April 22, 2018. (Photo by Jason Gooding)

Music continues to be the catalyst for growth in the relationship between Mennonite Church Saskatchewan and its Indigenous neighbours.

On Earth Day, April 22, 2018, Mennonites and members of the Muskeg Lake community gathered for An Afternoon of Song at Our Lady of Guadalupe Roman Catholic Church in Marcelin on the Muskeg Lake Cree Nation.

The program opened with a drum group and dancers from the Big River First Nation. Harry Lafond of Muskeg Lake welcomed guests and explained the meaning of the Cree songs and dances. Dolores Sand, also of Muskeg Lake, offered a brief meditation on how people are all connected to one another and to the earth.

Ben Pauls of Zoar Mennonite Church in Waldheim led an ensemble of 15 singers representing at least five other MC Saskatchewan congregations. Songs such as, “Send Forth thy Spirit that the Face of the Earth May be Renewed,” based on Psalm 104:30, echoed themes of resurrection and new life.

The closing hymn, “We Are One in the Spirit,” took on profound meaning as Indigenous and settler peoples alike sang, “We will walk with each other, we will walk hand in hand,” and then literally joined hands in a round dance around the sanctuary.

MC Saskatchewan’s Walking the Path Committee, of which Lafond and Pauls are members, planned the event as a follow-up to last summer’s successful “Shared land, shared song” gathering. Lafond wanted to see the two communities sing together again, but this time in a worship setting.

Leonard Doell, another Walking the Path member and Mennonite Central Committee Saskatchewan’s Indigenous Neighbours director, agreed with Pauls. “It was really a special time,” he said. “The fellowship was really good.”

The fellowship that began as people sang together continued around the table as they shared a potluck meal. Pauls sensed that as these groups broke bread together, “significant connections were made.” He added, “Strangers become neighbours as we take our small steps of faith.”

Ben Pauls of Zoar Mennonite in Waldheim, Sask., leads an ensemble of 15 singers from a number of MC Saskatchewan congregations during a joint worship service at Muskeg Lake Cree Nation on April 22, 2018. (Photo by Jason Gooding)