When change is your only option 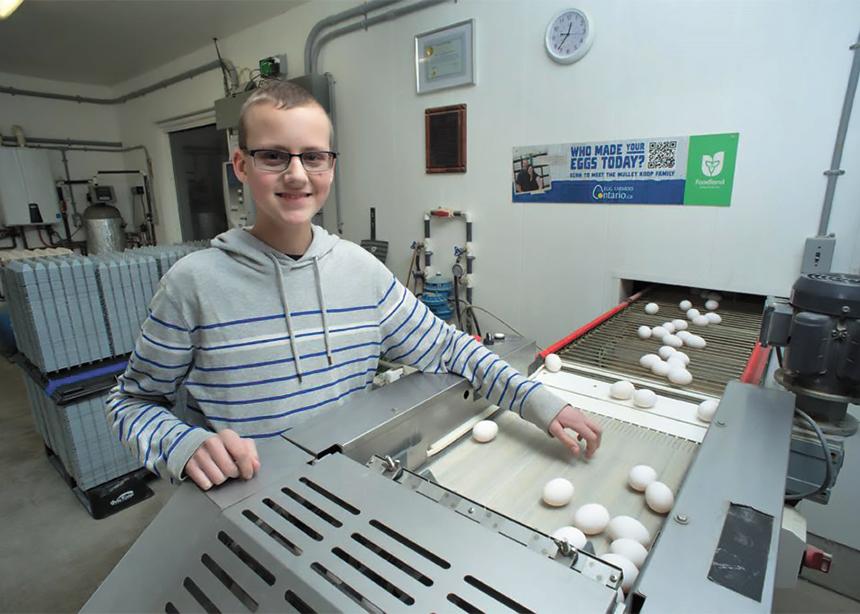 Chris Mullet Koop’s son Timothy works on the family farm, packing 30 eggs to a tray, that get stacked on skids. Six skids of eggs are picked up once a week. (Photo: Chris Mullet Koop)

When the pandemic hit in March, Chris and Laura Mullet Koop, who own and operate Elmwood Farms Inc., were profoundly impacted. Their farm, located in Jordan, Ont., in the designated green belt area on the Niagara escarpment, is an egg production and grape-growing enterprise, started by Chris’s family in 1932.

The farm has seen many changes over these years. It had mixed fruit trees in the early years; now it is only vineyards. More acres were added and more of the work is now mechanized. Technology has improved the breeds, food safety and animal care. Chris has added no more land but has doubled the density of the grape vines by understanding the science of soil.

The farm has laying hens producing 8,600 eggs daily. The large and extra-large eggs are sold in stores, while the small and medium eggs are shipped in bulk, without the egg shells, fresh or frozen to restaurants and chain stores such as Tim Horton’s.

When all the restaurants closed in March, the closure had a dramatic effect on supply chains. The farm still had 8,600 eggs rolling off the conveyor belt daily, as did all the other egg producers in Ontario. Meanwhile the borders were closed, the demand for wine was dropping and ice wine contracts were cancelled. Even though this year’s grape harvest was the best in 20 years, sadly many grapes were left hanging on the vine and have fallen to the ground. Grapes used for ice wines ended up as regular harvest.

Elmwood Farms is subject to the Egg Farmers of Ontario Marketing Board, which controls supply management and fair farm pricing. The farmers produce the eggs and the Marketing Board, oversees distribution. Chris also belongs to the Grape Growers of Ontario, which negotiates prices for all grapes sold to processors.

Because of the marketing boards, Chris did not have to solve the problem himself, but new strategies had to be put into place quickly. While some eggs went into storage, some medium eggs were re-packaged to sell in grocery stores. A Flock Early Removal Program helped to minimize the build-up of eggs in storage while new markets increased the eggs used in dog food and making vaccines. The egg farmers of Ontario also doubled their donations to food banks during the pandemic. They buy back the eggs and donate them, making sure all food banks have eggs.

Labour shortages have always been an issue in Niagara, and COVID-19 exacerbated the issue. The farm hires local labour for custom work, but some workers who helped in the vineyards stayed home due to the fear of contracting the virus. Some work finally got done a month later than scheduled. Farms that regularly hire offshore labour found borders were closed and flights restricted in the spring, when workers normally arrive.

How did Chris see his way through this most disruptive event for his generation? He says, “Faith is who you are, what you do, and how you work it out.”

He quotes G. K. Chesterton, “The poet wants to get his head into the clouds. It is the logician who seeks to get the heavens into his head. And it is his head that splits.” He believes that, in the first half of life, we try to fit everything into our heads. It is the second half (where he feels he is) when we become more observant; when we are on a pilgrimage of self-discovery, to become new human beings, becoming more expansive in our faith.

And that is what he sees in this pandemic time. It is like riding the wave in an ocean, it is up and down all the time. He is optimistic that we as a society will find a way through, that we will learn a lot and come up with new strategies. We are facing a new frontier that invites us to continue our pilgrimage. 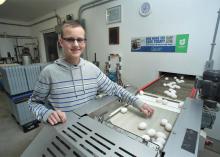 Chris Mullet Koop’s son Timothy works on the family farm, packing 30 eggs to a tray, that get stacked on skids. Six skids of eggs are picked up once a week. (Photo: Chris Mullet Koop)