What makes a quilt Amish? 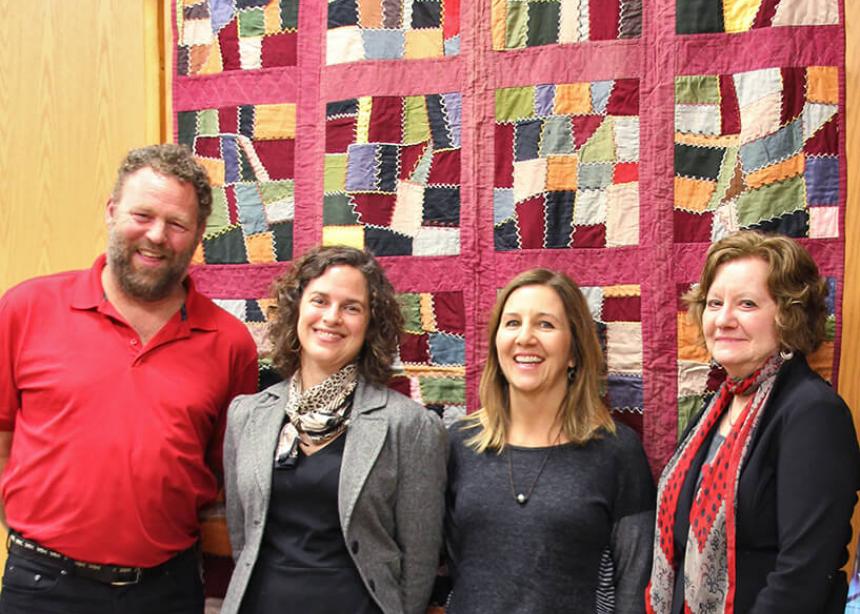 What makes a quilt Amish?  Does it have to be “quilted by a group of Amish women sitting around the frame in their sitting room?” Or does it have to have an Amish pattern, like the Amish Wedding pattern created and popularized by Rachel Pellman of the Old Country Store in Lancaster, Pa? Is appliqué or pieced the appropriate technique?

Janneken Smucker asked these questions in her 2016 Bechtel Lectures at Conrad Grebel University College on Feb. 4 and 5, citing the above quote as one person’s romantic imagination about the quilt she had bought in a Lancaster store and labelled as Amish.

What if the quilts hanging in Lancaster County stores labelled Amish were actually designed, pieced, appliquéd and embroidered by Hmong women, some in Pennsylvania and others in villages in Thailand, and only quilted by the Amish women, she asked rhetorically, noting that Pellman is not Amish and yet has designed and published books of Amish designs.

Amish quilts were discovered and popularized as art pieces reminiscent of abstract impressionist paintings by Mark Rothko and Josef Albers by the New York couple Jonathan Holstein and Gail van der Hoof in the early 1970s. They had begun collecting, hanging the quilts in their home, and displaying them in public, popularizing the objects as works of art.

This led to a 1978 feature article in Home and Garden Magazine and the trend was begun. Demand for the quilts soon outstripped the ability of Amish women to produce them, so other means were found.

The traditional paj ntaub embroidery of Hmong women made them potential co-workers with Amish women and others in producing appliqué quilts when refugee Hmong families moved into the Lancaster area just as the interest in Amish quilts for American Country Décor took off. Some Hmong women were unwilling to stay in the background and began to sell their works in stores in Lancaster alongside traditional Hmong embroidery.

Smucker was focussed on the questions of authenticity, provenance (the artistic process behind an object and to whom does it belong), style, pride, simplicity and justice. Some Amish were willing to sell family heirlooms when it became apparent to them that they had quilts valued at more than $10,000. It was a proud thing to have such an expensive object, especially if the money could pay down a mortgage, something deemed much more practical.

But many of the Hmong women were being paid minimum wage or lower to produce items that were selling for thousands of dollars. Others were producing more than one quilt a week, carrying out all the steps and becoming wealthy in the process. Some quilts were simply labelled “locally made” and sold in Lancaster.

But as styles changed and the market was flooded by quilts, and the Amish found it more practical to buy comforters from large chain stores, no longer producing quilts, the trend came to an end. This was aided by an exposé in the Allentown (Pa.) Morning Call paper, drawing attention to the fraudulent nature of many of the Amish quilts. (Visit bit.ly/1WrGTu5 to read the article).

Smucker wondered if the term “fraudulent” actually applies. What makes a quilt Amish? When does it start being Amish, since the Amish borrowed the form from non-Amish neighbours in the mid to late 1800’s? When does it stop being Amish?

On the 401 Highway in Cambridge, Ont., a large bed and chair advertise Mennonite Furniture, and other local businesses in the Waterloo Region do the same. What makes furniture, or anything else for that matter, Mennonite? 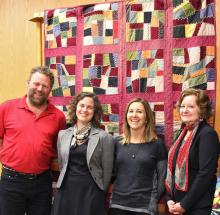