What if you were ‘forced to flee’? 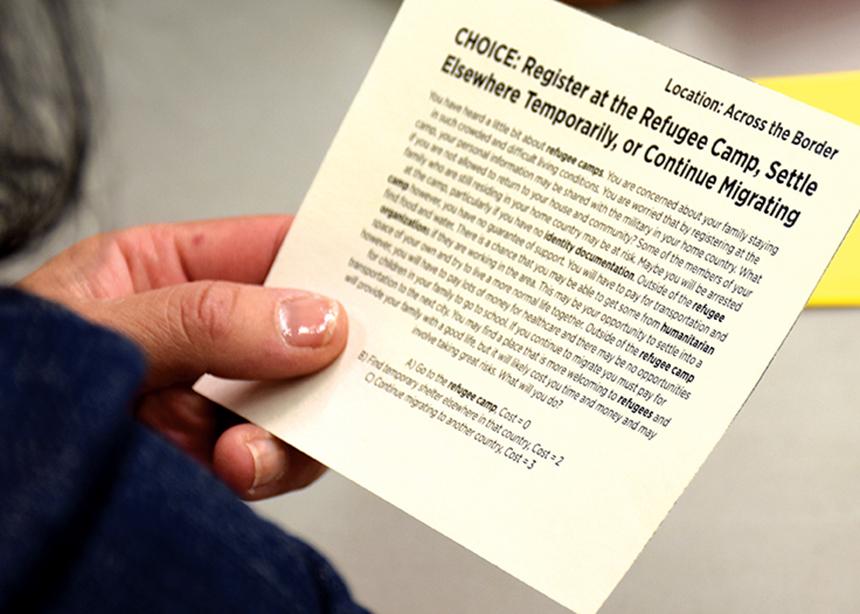 People in your country are angry at the government. They gather to protest peacefully, and the government responds by opening fire on the protesters. The occasional bomb goes off and people are fighting in the streets. Soon, it’s not safe for you to leave the house and go to work. When food is available, it’s very expensive. You have the option to pay smugglers to get you out of the country. If you can manage to sneak out without being caught, you could start life over in a new country. But there are many risks involved.

If this were you, what would you do?

“Forced to Flee” is a new resource game from the Canadian Foodgrains Bank that encourages participants to consider some of the real-life situations experienced by the more than 65 million displaced persons in the world today.

“Most Canadians don’t understand the challenges that refugees face,” says Naomi Johnson, the Foodgrains Bank public engagement officer who designed “Forced to Flee.” “For example, we’ve never had to choose which belongings to carry with us while running from our homes, or whether we can trust officials or smugglers to keep us safe.”

There has been an increase in the number of refugee claimants crossing the border and seeking asylum in southern Manitoba. In 2017, about a thousand people crossed the border around Emerson from the U.S. It has stirred some tension, particularly among border communities where asylum seekers show up in the middle of the night.

“‘Forced to Flee’ acts as a counterweight to the border-crossing story. It shows that if there’s someone crossing at a border, that person has crossed at other borders, where border security may be less trustworthy,” says Darryl Loewen, executive director of the Manitoba office of Foodgrains Bank member Mennonite Central Committee Canada.

MCC Manitoba has facilitated the simulation across the province for communities that have received an increase in asylum seekers and where privately sponsored refugees have resettled.

“It helps to create empathy,” says Ligia Mariz, who works with the Immigrant and Refugee Community Organization of Manitoba. “It helps us better understand situations we may never know.”

Loewen agrees. “It’s important to debunk the myth that people are leaving because they want to, because they have another choice,” he says.

Yachar Barakat is an employment facilitator with the Immigrant Centre in Winnipeg. He came to Canada from Syria four years ago. His family in Syria recently joined him in Winnipeg. “No one wants to leave their families and businesses,” he says. “My family had no choice. They had to leave without their documents.”

Maricel Bucher works for the Newcomers Employment and Education Development Services (NEEDS) Centre, an organization serving newcomer Winnipeg youth and young adults. She participated in the game as part of an event put on by the Manitoba Association of Newcomer Serving Organizations to introduce their staff members to some of the issues their clients may have experienced.

“I learned a lot. It was a very intense experience,” she says. It was good working as part of a team, she explains. “I just wanted to stay put, but my two teammates were like my brothers,” she says. “We ended up making decisions and negotiating as a team.”

The game helps to create understanding and empathy for people fleeing dangerous situations who end up in Canada, but also for people overseas, says Johnson. “Each scenario in ‘Forced to Flee’ is taken from a real-life situation the Foodgrains Bank has responded to,” she says. “Our hope is that Canadians will be moved to think of their neighbours around the world—who are enduring such situations—with sympathy, and be moved to respond how they feel called, whether through donations, advocacy or prayer.”

To download “Forced to Flee” to use in community, classroom or church settings, visit foodgrainsbank.ca/forced-to-flee. 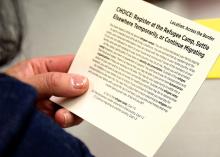