What does ‘sorry’ mean? 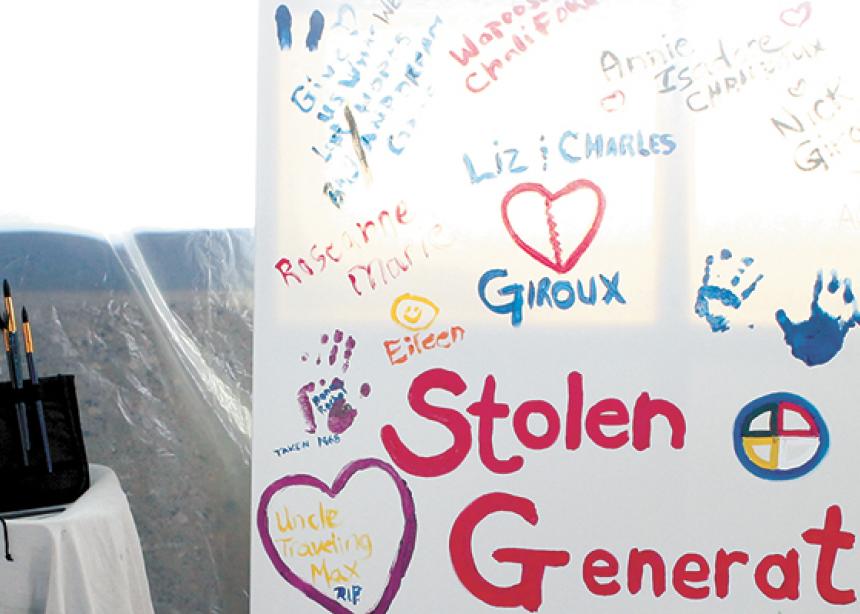 During the Sixties Scoop Apology Engagement at Edmonton’s Amiskwaciy Academy on March 1, 2018, survivors were invited to paint their experiences onto canvas for others to see. (Photo by Donita Wiebe-Neufeld )

“Sorry” is a very Canadian expression, but what does it mean?

To the more than 200 Sixties Scoop survivors gathered at the Amiskwaciy Academy in Edmonton on March 1, 2018, the word is problematic. The hearing is the last of six events held across Alberta by the NDP government in an effort to make an upcoming government apology meaningful.

Government officials and members of the public gathered to hear stories of Indigenous children taken from their homes in the 1960s and widely scattered into adoptive or foster homes. While ostensibly done for the good of the children, in many cases racism, lies and an insidious goal of assimilation created new issues and magnified existing problems for the families that were ripped apart.

For children, the loss of language, culture and family connections has left a legacy of pain and unending identity crisis. For parents whose children were taken, broken hearts added to the brutal legacy left by the residential school system.

What can hearing a government official say “We are sorry” possibly mean to a 50-year-old woman who believed she was unwanted and has just learned that her mother called social services daily asking where her baby was?

What regretful official sentiment can possibly assuage the pain of life-altering lies? The March 2 issue of the Edmonton Journal tells the story of Suzanne Wilkinson, whose mother was told she was stillborn and whose adoptive parents were told she was willingly surrendered.

What can any saying “sorry” do to for the trauma suffered by an 11-year-old who was abducted by social services while playing in her front yard? Does the word excuse the fact that the foster home turned out to be abusive as well as culturally foreign?

The stories being told by Sixties Scoop survivors are hard to hear because the old wrong is vividly gut-wrenching and the wounds from it are still open. Survivors in the sharing circles regularly mop their eyes and add the tearful tissues to white paper bags that will be collected and ceremonially burned to honour their pain in the eyes of the Creator.

It’s hard for those listening to understand that such blatant injustice was ever believed to be the best thing for the children.

In light of the stories, an apology can never be adequate recompense. It is crucial to listen to what survivors say they need, and to give back more than words. Many survivors are unsure of, and unready for, an apology, having experienced a long history of broken promises by many governments.

At Amiskwaciy, however, a spark of hope is evident as participants work toward defining a meaningful apology. The fact that the current government is listening carefully to survivors and working collaboratively with the Sixties Scoop Indigenous Society of Alberta is significant.

Survivors clearly say that words are meaningless unless actions and policies change, such as accessible supports for re-uniting families, counselling, compensation, anti-racism initiatives, revamped child and social services, and education of the non-Indigenous population.

If it comes with real action, an apology will become meaningful. Perhaps “sorry” can mean a hopeful beginning for change this time around.

During the Sixties Scoop Apology Engagement at Edmonton’s Amiskwaciy Academy on March 1, 2018, survivors were invited to paint their experiences onto canvas for others to see. (Photo by Donita Wiebe-Neufeld ) 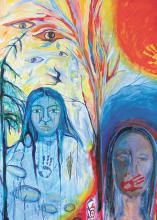 During the Sixties Scoop Apology Engagement at Edmonton’s Amiskwaciy Academy on March 1, survivors were invited to paint their experiences onto canvas for others to see. (Photo by Donita Wiebe-Neufeld )