The way of the open palm

Peacebuilding at the United Nations 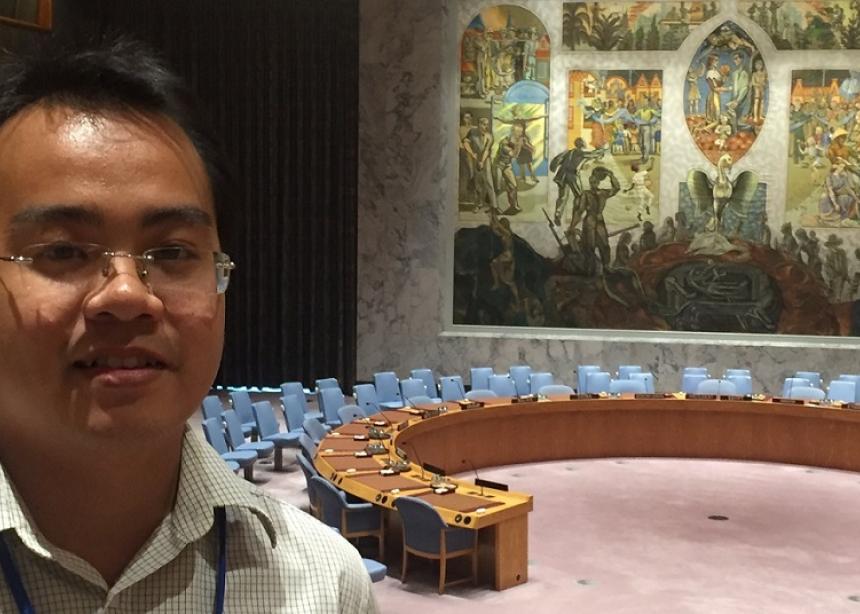 Growing up as a preacher’s son, I was immersed in Christian values. Every memory I have revolves around Vietnamese Mennonite Church in Ho Chi Minh City. I learned the way of Christ: to love my neighbours and to give to the poor.

In Vietnam, we have a philosophy called “the way of the open palm.” The palm facing up is a non-threatening gesture, reminiscent of the pleading gesture of a beggar. The person being addressed will not feel threatened by the gesture, and it is used universally as a way of greeting. As a Christian, I am also familiar with the image of God’s open hands.

When I first came to New York City to start my one-year internship as the Mennonite World Conference/International Volunteer Exchange Program (IVEP) intern at the Mennonite Central Committee (MCC) United Nations office, I had a reality check.

At the United Nations, people talk about imposing sanctions on North Korea, military interventions in Syria and conflict in the Democratic Republic of Congo. I was depressed; there were too many atrocities and they were too horrific.

I realized, unfortunately, that the people in power often find it easier to destroy than to build, to oppress than to understand. When we turn on the TV, we see an arms race, conflict and nuclear threats. Most people think that military strength ensures peace, but in reality it only brings fear and destruction. Major countries find the idea of exercising their power alluring: with power and wealth, they can protect the weak, help the poor and bring “security to the world.”

Little do they know that the more they try to impose their will on others, the more resistance they will create.

But there is hope.

There are many people who yearn for peace and they are working hard, day in and day out, to bring real peace to the world. The people of MCC are a part of this group, as am I. And our method is the way of the open palm.

I’m inspired by Doug Hostetter, the director of MCC’s UN office, who has lived this philosophy of peace all his life, including during the Vietnam War. Instead of bearing guns and bullets, like many soldiers, he came to my country with MCC, bringing books and pencils to help Vietnamese students learn how to write and read their own language. He lived in the community and earned the trust of the Vietnamese people whom he met.

Today, when most of the people tend to stay away from North Korea, MCC is there to bring food and medical supplies to people in need. We try to be the voice for displaced people from Latin America and war zones in the Middle East. Although small, our presence is vital to encourage dialogue.

This is what I believe being a Christian means. With open minds we welcome people. With open hearts we share their pain and suffering. And with open hands we work with them to bring peace to this world. It’s not easy, but I’m pleased to be a part of this effort to help “God’s will be done on earth as it is in heaven.”