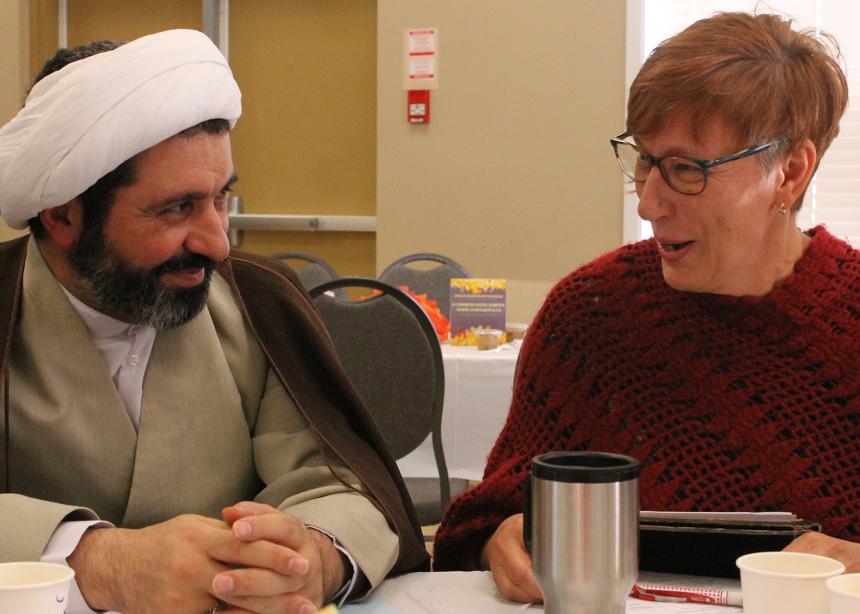 At a time when world news seems to set nations against each other, the chatter and laughter of an obviously diverse crowd can be inspiring.

On Oct. 28, men and women of a variety of races and ages wore hijabs, clerical collars, T-shirts and suit jackets while mixing together and enthusiastically engaging in the fifth annual Christian-Muslim dialogue at St. Matthias Anglican Church, where Rector David Tiessen said, “Interfaith dialogue is no longer an option, if it ever was. It is a necessity.”

This year’s event was meant to feature two scholars and friends: Muhammad Ali Shomali of the United Kingdom and Harry Huebner of Winnipeg. Unfortunately, illness prevented Huebner from participating. In his stead, Irma Fast Dueck and Huebner’s son, Chris, both professors at Canadian Mennonite University in Winnipeg, shared the stage with Shomali.

The questions, “Why is dialogue valuable?” and, “What has changed for you because of it?” were posed to the speakers and then discussed around tables. With humility and passion, the speakers shared personal stories of a shared love for God.

“We have come from God, but we have been separated,” Shomali said, adding, “We have to find our way back. God is our destination.”

Fast Dueck talked of how she has valued and learned from her Muslim friends. “When we recognize differences, we can begin to understand each other,” she said.

While many in the crowd had been to previous dialogues, there was a significant number of newcomers as well. Anglicans Susan Daniel and Carol Gonnet, who have lived in places where they had few opportunities to interact with Muslims, came to the event because, as Daniel said, it was “an opportunity to have personal contact with Muslims and other [non-Anglican] Christians. It was a very positive connection!” Both Daniel and Gonnet were able to ask questions of Muslims at their table, which helped dispel their fears of the “other.”

After the dialogue, a young woman, Nuura Mohamoud, said, “An event like this changes my life!” She initially hadn’t wanted to give up her free time to attend, but her friend, who attends a discussion group with Donna Entz, a Mennonite Church Alberta outreach worker who builds bridges between Christians and Muslims, convinced her to go.

In spite of believing she would not be changed by the dialogue, Mohamoud was inspired. She said she was amazed at the diversity of Christians at her table, and inspired by the speakers and the open-minded discussions that followed. She was especially impacted by Shomali’s words that Christians and Muslims should not be fighting, and that conflict resolution needs to start within people’s close relationships, their families and friends, and then it can spread. “You think you have it all figured out and then . . . I left with new perspectives and my purpose was renewed,” she said. 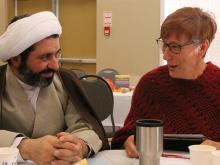 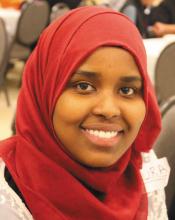 Nuura Mohamoud said of the Christian-Muslim dialogue, ‘An event like this changes my life!’ She was amazed at how much there is to learn about each other, even when, and perhaps especially when, people believe they have their life and faith all figured out. (Photo by Donita Wiebe-Neufeld)