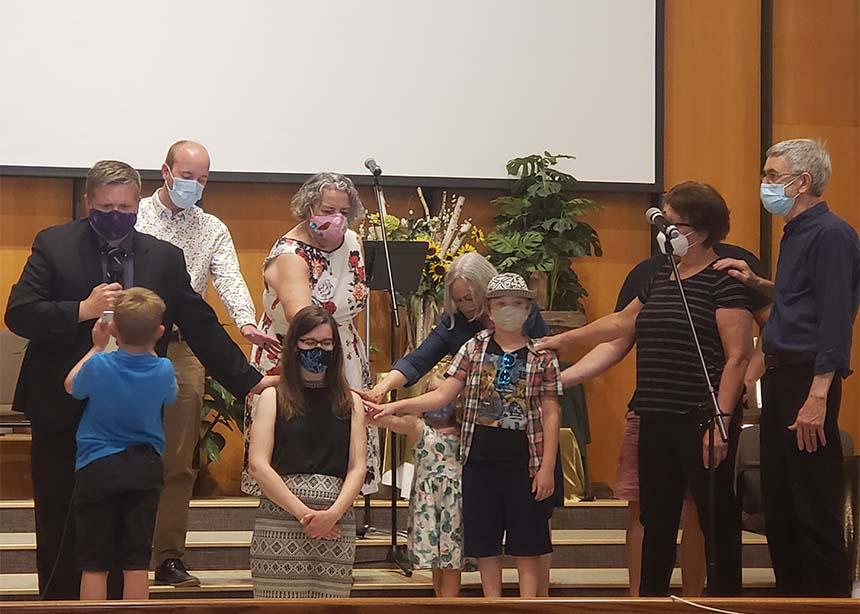 Siemens wraps up his time with MC Saskatchewan at the end of January. He will begin as executive director of Mennonite Central Committee Alberta starting in February.

Siemens joined the MC Saskatchewan family in 2007 as the pastor of Grace Mennonite Church in Prince Albert. He put his leadership gifts and people skills to work quickly.

“I was sort of always involved broadly in leadership at MC Saskatchewan, being on committees, being involved with Person to Person [prison] ministry, and serving as the vice moderator,” he says. “It was a great place to test out and grow my leadership skills.”

In the summer of 2015, he was approached about considering the executive minister position. “I was asked, ‘If your church asked you to take on this role, what would you say?’ I said, ‘I’d have to think and pray about it.’ ‘Well, the church is asking you!’ ” he says with a laugh.

Siemens began the half-time position in August 2015, moving to full time in the spring of 2016.

His six years as executive minister have included changes and challenges.

“When I started, there was a lot of wrestling about Future Directions and the reorganization of MC Canada,” he says. “How do we integrate? That was a huge task. And when I started, there were 29 MC Saskatchewan congregations, and now there are 22. That’s indicative of a bigger trend of the decline of Christianity and the rise of secularity.”

Still, as Siemens moves on, he sees hopeful possibilities for MC Saskatchewan and MC Canada.

“Because of the decline in Christianity, there is so much potential for new things, new ways of doing church, new ways of being faithful,” he says. “We just need to be more open. I always say, ‘It’s easier to die than it is to change.’ But we need to change to see something new, to broaden our imaginations. We have to find the energy for change. And for MC Canada to have a future, it has to be one that is integrated to the regions.”

He acknowledges that Mennonite churches often struggle to connect with their neighbours, and with welcoming those who are not ethnically Mennonite. In spite of the challenges that lie ahead for the church, for Siemens, the strength of MC Saskatchewan is found in the people who make up the individual congregations.

“We’re very interconnected here: our pastors, our churches, our councils, and our pastoral leadership commission,” he says. “There is such a desire to be the church together.”

Siemens observed that strength up close. One of the fondest memories of his tenure were the all-congregation interviews he conducted with several churches. “I loved sitting down with people, hearing their stories, and asking, ‘Where do you want to go as a church?’ Hearing those stories of faith and hope was a big part of why I loved his role.”

The warm feelings were mutual. At one annual delegates session, a loonie and toonie collection was taken up to buy Siemens, who is a diehard Winnipeg Blue Bombers fan, his very own Saskatchewan Roughriders jersey. The jersey was emblazoned on the back with “MC Sask” and “No. 59,” a reference to 1959, the year that the Conference of Mennonites of Saskatchewan started. “It’s one of my all-time-favourite memories”, he says with a chuckle.

Ultimately, Siemens expresses gratitude for his six years in this role.

“MC Saskatchewan gave me space to do the work and to connect with our congregations,” he says. “I’ve been deeply privileged to have the trust to do this work. I’m thankful for all the opportunities I’ve had, and I hope that I’ve been able to bring people together as we strive to be the Body of Christ. I love the people I’ve served.” 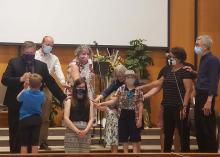 Ryan Siemens, third from left, along with his wife, Sandra Sinnaeve, left, help lead music for an MC Saskatchewan virtual service during the COVID-19 pandemic. (Photo courtesy of Ryan Siemens)