Testimony of a church-conflict casualty 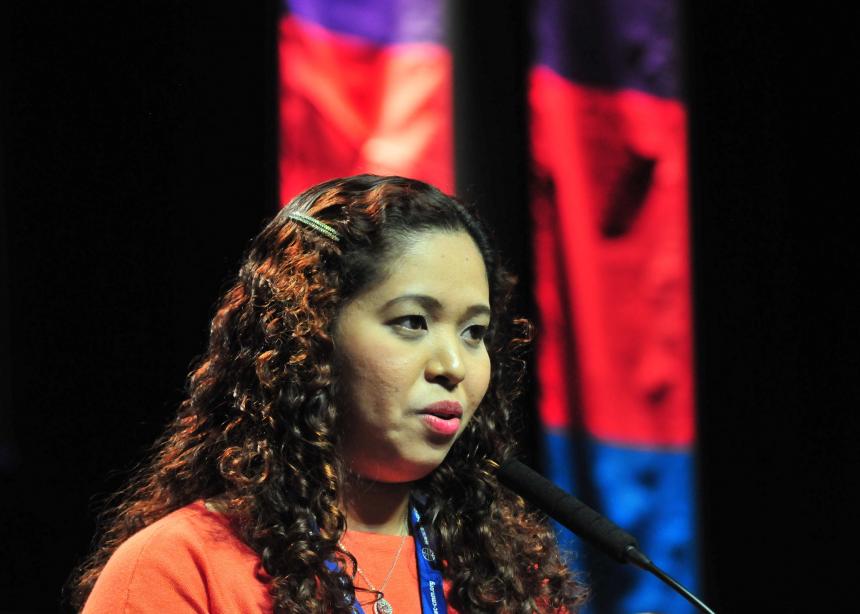 Remilyn Mondez of the Philippines warned about the perils of church conflict and then sprung a surprise.

Speaking July 23, 2015, at the morning worship service of the Mennonite World Conference assembly, Mondez told the story of a girl named Lenlen. When Lenlen was 2, her parents switched from a liberal Mennonite church to a conservative one. The women wore cape dresses and head coverings.

Lenlen’s parents wanted her to go to college, but the church frowned on higher education. So when she was 15, the family switched back to the more liberal Integrated Mennonite Church of the Philippines.

“Her world was crushed,” Mondez said of Lenlen. She lost her childhood friends.

Today Lenlen is happy in church again. But that’s not the case for other relatives and friends who switched to the conservative church and later left it. Some don’t go to church at all. Others have no relationship with Jesus Christ.

“Remember, there are children and young people caught in church conflicts,” Mondez said. “Sometimes they become church-haters. And we wonder why we are losing young people in the church.”

They crowd applauded her warning. And then Mondez completed her story.

“I was a casualty of church conflict,” she said. “I was Lenlen.”

Mondez had already centered her message on the dangers of church division.

She said God must weep “when the very children who worship cannot walk together in peace.”

The day’s theme was “Walking in Conflict and Reconciliation.” The morning service featured the MWC Peace Commission.

Speaking before Mondez was Nancy Heisey, a former president of MWC and current Bible professor at Eastern Mennonite University in Harrisonburg, Va. She suggested looking to an unlikely scripture—1 Thessalonians 5—for guidance on dealing with church conflict.

Although the passage is not about conflict, Heisey said, its relevance for conflict lies in how Paul defined the battle between light and darkness as not a clash between people.

“For Paul, being children of light is a community label in the midst of forces of darkness, [which are] not people but powers,” she said.

“It is time for God’s people to be the children of light who build each other up in our world.”

Heisey said members of MWC haven’t always done a good job of building each other up. She told of conflict over the location of the 1972 MWC assembly in Curitiba, Brazil, a country then ruled by a repressive government. Conflict arose between those who objected to meeting in Brazil, or even threatened to boycott the assembly, and those who said reports of oppression were propaganda. The tension was only partially resolved.

“Many of us look longingly at the faithful peace witness sustained by the Mennonites, and we wish we could return to our peace roots,” she said.

Paul Schrag is editor of Mennonite World Review. This article was written for Meetinghouse, a group of Mennonite publications. 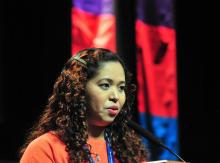 Remilyn Mondez, from the Philippines: “I was a casualty of church conflict.” (Dale D. Gehman)