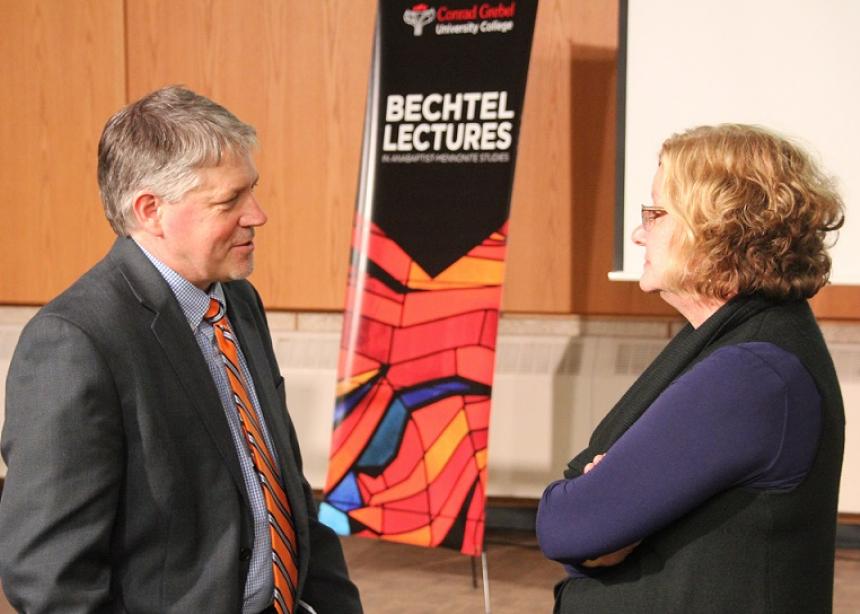 David Weaver-Zercher visits with Marlene Epp, dean of Conrad Grebel University College, Waterloo, Ont., at the 2018 Bechtel Lectures, held on March 1 and 2. The theme this year about how Mennonite stories, old and new, are used in the media and church. (Photo by Dave Rogalsky)

The two nights of the 2018 Bechtel Lectures at Conrad Grebel University College were connected by David Weaver-Zercher and focussed on Mennonite stories and how they are used in the media and elsewhere.

The professor of American religious history at Messiah College in Mechanicsburg, Pa., is probably best known for explaining to the worldwide media the seemingly quick forgiveness by Amish parents of Charles Carl Roberts IV and his family after Roberts shot eight Amish schoolgirls, killing five, in Nickel Mines, Pa., in 2006. Weaver-Zercher later collaborated with Donald Kraybill and Steve Nolt on Amish Grace: How Forgiveness Transcended Tragedy about the event.

His presentation on March 1 focussed on how conservative groups of Mennonites use Martyrs Mirror to encourage their youth and young adults to remain in the church rather than going out in the world. The stories in the book, particularly those of teenaged Anabaptists who gave up their lives for their faith, are used to favourably compare conservative Mennonites’ uniqueness against the pressure to fit in among the non-Mennonites or assimilated Mennonites.

Frequently comparing these Mennonites to “assimilated Mennonites” like himself, he wondered at this “shock and awe pedagogy” that encouraged youth with “something to die for” rather than teaching “fidelity, a search for something and someone to be true to.”

He quoted Kendra Dean in Practicing Passion: “The life of the martyr fascinates adolescents, not because they want to share the martyr’s grisly suffering, but because they envy their passion, their purpose and their brazen determination.”

He suggested that assimilated Mennonites could use Martyrs Mirror to teach “our history,” to remind youth “that some Christians experience this today,” and that “Christians in the United States feel under threat, they feel pressure to abandon their commitments.”

The next night he was part of a panel of Mennonite media communicators moderated by Marlene Epp, Grebel’s dean. Included were Sherri Klassen, social media persona and founder of the Mennonite satirical blog, the ‘Drunken Mennonite,’ where she satirizes Mennonite themes and offers cocktail recipes; Katie Steckly, who is best known for her satirical videos on YouTube; Sam Steiner, blogger and one of the editors of the Global Anabaptist Mennonite Encyclopedia Online (GAMEO); and Johnny Wideman, director and one of the chief writers for Theatre of the Beat.

The panel members each use different styles to present their views of Mennonites in the 21st century. While they each spoke to their own media presence, their discussion focussed on how other media looks at Mennonites, including TV shows like Amish in the City, and Pure, a Canadian Broadcasting drama about fictional “conservative” Mennonites smuggling drugs from Mexico to Canada.

Many of the panellists said they use humour to get at issues but noted that there are issues they might not address with humour, including Indigenous-Mennonite relations. 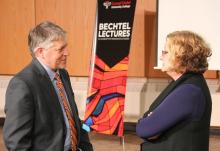 David Weaver-Zercher visits with Marlene Epp, dean of Conrad Grebel University College, Waterloo, Ont., at the 2018 Bechtel Lectures, held on March 1 and 2. The theme this year about how Mennonite stories, old and new, are used in the media and church. (Photo by Dave Rogalsky)

Bruce Bechtel, left, and his father Lester, founder of the Bechtel Lecture series at Conrad Grebel University College, Waterloo, Ont., chat with David Weaver-Zercher, this year’s lecturer. The theme this year was about how Mennonite stories, old and new, are used in the media and church. (Photo by Dave Rogalsky)

The Bechtel Lecture panel, left to right: David Weaver-Zercher, this year’s visiting lecturer; Johnny Wideman of Theatre of the Beat; Sherri Klassen, the ‘Drunken Mennonite’ blogger; YouTube vlogger Katie Steckly blogger; and Sam Steiner, blogger and an editor of the Global Anabaptist Mennonite Encyclopedia Online, at the March 1 and 2 Bechtel Lectures. The theme this year was around the topic of how Mennonite stories, old and new, are used in the media and church. (Photo by Dave Rogalsky)