Supporting women’s education with a party and a quilt

Birthday party with a purpose 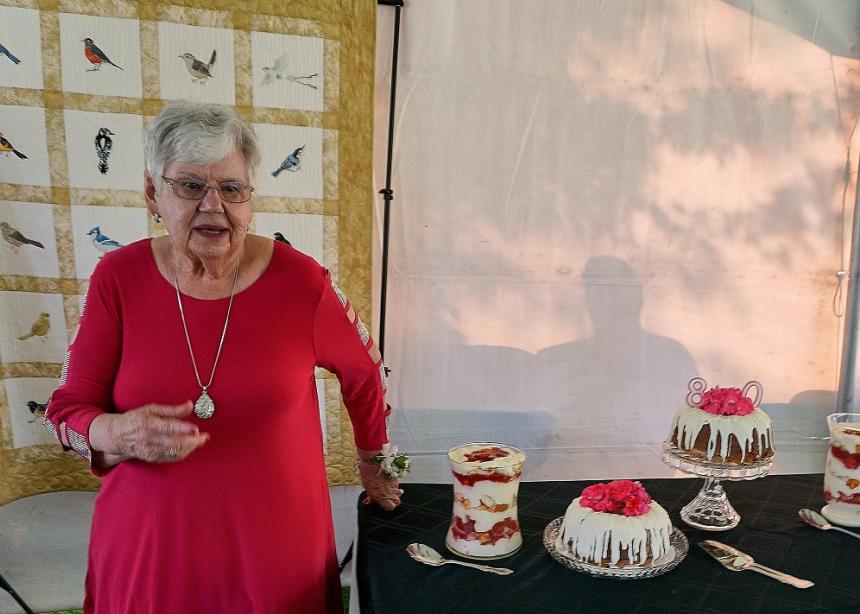 Martha Wiens stands in front of a quilt she made to raffle off at her 80th birthday party. Proceeds will support a scholarship for a young woman to attend Meserete Kristos College in Ethiopia. (Photo by Michael Wiens)

When retired teacher Martha Wiens of Leamington (Ont.) United Mennonite Church turned 80, she threw herself a birthday party with purpose. She auctioned off a specially made quilt to raise money in support of a young woman’s education at Meserete Kristos (MK) College in Ethiopia. But she didn’t stop there, pledging to pay for a full four-year scholarship to make sure the lucky recipient has no interruptions in her study.

Wiens conceived of the idea after learning about MK College through Fanosie Legesse, a former student and Mennonite Church Canada Witness worker in Ethiopia. The college was established in 1995 to offer a Christian ministries program serving Meserete Kristos Church, the fastest growing member church of Mennonite World Conference. In 2014, 19,000 members of the church were baptized. In 2016, the college began construction of a women’s dormitory on its main campus in Debre Zeit with the help of some generous donors.

Legesse told the Leamington church about the strong desire for Christian education in Ethiopia and of a special need to garner support for female students. That idea connected deeply with Wiens. “I’m a female,” she says, “and sometimes females don’t have same opportunities as fellows do. I was a high school teacher, and education is important to me.”

Making quilts is also something that is important to Wiens. When she was a child, her mother taught her to sew and embroider, but she had no time to engage in those activities while she was teaching high school. After retiring in 1996, she picked up quilting with a group of friends and has been dedicated to the art ever since. “I prefer to piece the tops or appliqué and do machine or hand embroidery,” she says, adding that she gets someone else to machine-quilt the result of her creative efforts.

Wiens lives near Point Pelee National Park. Her surroundings inspired the 127-centimetre-by-152-centimetre quilt auctioned off at her birthday. Each of the quilt’s 20 squares contains an embroidered appliqué of a bird native to the area.

The birthday celebration was held on June 10—five days before Wiens’s actual birth date—at the home of quilting friend Joanne Philips and her husband Jerry Philips, who live near Colchester, Ont. Wiens rented a tent and used her own china, silverware and napkins for table settings. A friend catered the event with appetizers and lemonade, and other friends and relatives pitched in to park cars, take photographs and sell raffle tickets. Sold at $10 apiece to the 40 guests in attendance, the tickets raised $740.

The quilt was won by Katie Froese, also of Leamington United Mennonite. “I was overjoyed to win it. . . . It’s just gorgeous,” says Froese, pointing out the attention to detail evident in the quilt. She adds, “I kind of had a feeling I was going to win, but I was still surprised when I did.”

To learn more about MK College and the role of women in Meserete Kristos Church visit news.mennonitechurch.ca/dormitory-create-equal-opportunity-women.

For more on the Meserete Kristos Church, see:
They can’t keep up
Bogale Kebede: Apostle to the Kaffa
Ethiopian Church grows in maturity

Martha Wiens stands in front of a quilt she made to raffle off at her 80th birthday party. Proceeds will support a scholarship for a young woman to attend Meserete Kristos College in Ethiopia. (Photo by Michael Wiens)