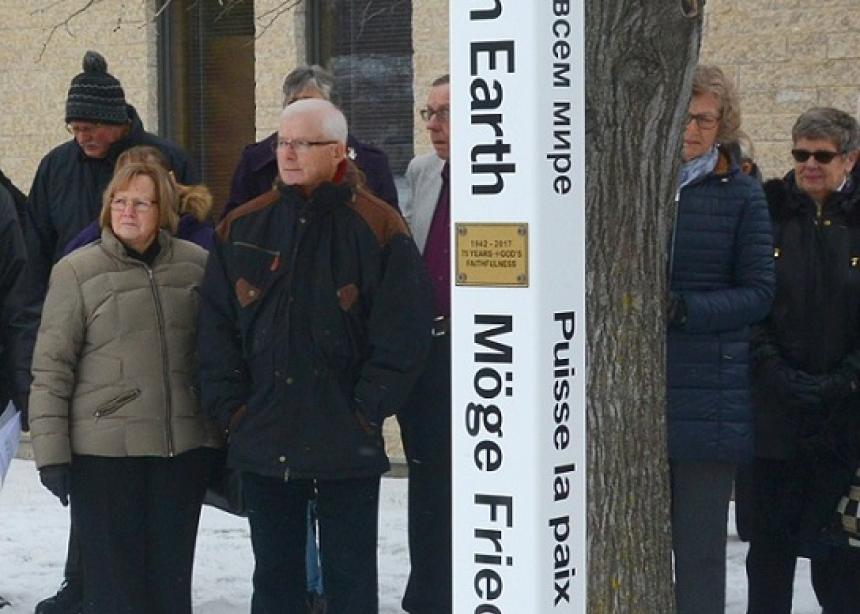 To celebrate Steinbach (Man.) Mennonite Church’s 75 years of worship and ministry, pastors and congregants planted a peace pole in front of its current building on Loewen Boulevard on Nov. 12. Next spring, a garden and bench will be installed. (Steinbachonline.com photo by Lothar Dueck)

Church Board Chair Karen Peters said the festivities began on the evening of Sept. 30 with a program called “Stories and songs” that highlighted various aspects of the church’s history. She noted that the next morning there was a thanksgiving anniversary worship service with a number of former pastors who had been a part of the congregation.

“We are calling this our homecoming weekend, and homecoming, of course, refers to people who have attended [Steinbach Mennonite] in the past, but definitely also anyone who feels connected to our congregation, and that would be people from other walks of life and people that have crossed paths with our congregation in various ways over the decades.”

Peters said that since the church was founded in 1942 at the corner of Reimer Avenue and Hanover Street, it has seen incredible growth and many people’s lives have been touched. “I believe the impact has been seen in many different ways,” she said. “There have been many numerous programs over the years that have opened our doors to the community. The most recent one would be Steinbach Community Outreach, and that program is still going on and is actually booming.”

The church has had seen some hard times over the last few years, but Peters noted that the congregation is excited about the future. "Steinbach Mennonite Church is continuing to discover who they are and how they want to move forward,” Peters said. “The people that are in the congregation are appreciating the opportunity to worship together and grow together, and I think we have the opportunity to support each other, love each other and to grow in our faith.”

To celebrate Steinbach (Man.) Mennonite Church’s 75 years of worship and ministry, pastors and congregants planted a peace pole in front of its current building on Loewen Boulevard on Nov. 12. Next spring, a garden and bench will be installed. (Steinbachonline.com photo by Lothar Dueck)