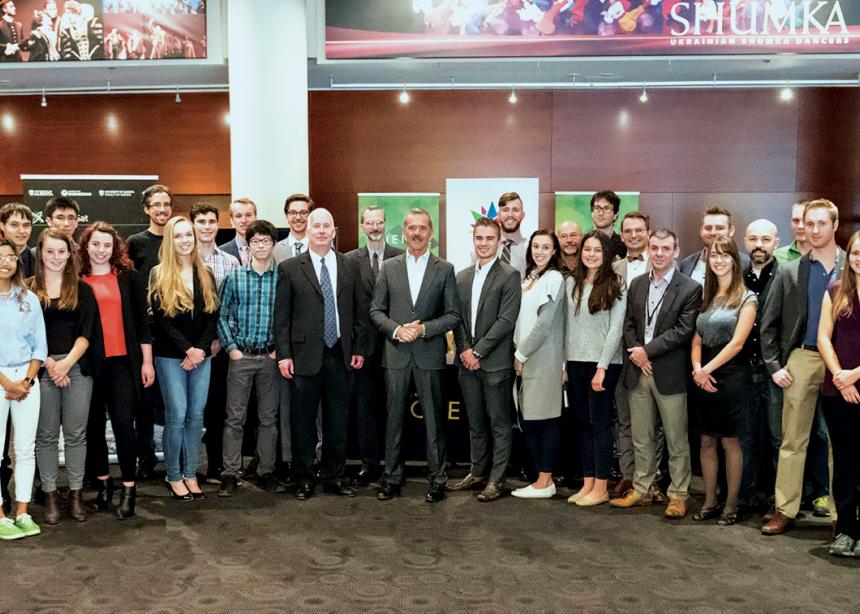 For most people who dream of exploring outer space, the dream dies before they reach adulthood. That’s not the case for Taryn Haluza-Delay.

The 20-year-old Edmonton resident, who attends First Mennonite Church and is currently a third-year engineering physics student at the University of Alberta, hopes to one day become an astronaut.

“It would be really cool to go into space and do this research in microgravity that really can’t be done on Earth,” she says. “And then there’s always the possibility of going to a different planet or a moon, and discovering something completely different that we haven’t found on Earth.”

Haluza-Delay is gaining valuable experience by participating in AlbertaSat, a student group at the University of Alberta. AlbertaSat designed and built the Experimental Albertan No. 1, also known as Ex-Alta 1, Alberta’s first orbiting satellite.

The rectangular satellite, which is 30 centimetres long and roughly the size of a milk carton, was sprung from the International Space Station this past May. Ex-Alta 1 is currently orbiting Earth 400 kilometres in the sky, collecting data about space weather.

Haluza-Delay first joined the group in the summer of 2015, shortly after graduating from high school. She was volunteering in the University of Alberta’s physics department, and through her involvement there got to help build a sensor for the satellite as well as a rig for testing the sensor. It was a lot of work, she says; at the same time, “it was really cool to see something I had built when I was 18 go up into space.”

After she finished her work on Ex-Alta 1, she moved on to working on AlbertaSat’s second satellite, Ex-Alta 2. She is an assistant engineer on the project and also its payload lead. As such, she is overseeing the complete technical design of the satellite, as well as leading the team that is developing the camera that will be on Ex-Alta 2.

Once it’s in space, Ex-Alta 2 will collect data that will be useful for forest-fire prediction and detection. Haluza-Delay and her fellow students were inspired after seeing the impact of the 2016 wildfire that ravaged Fort McMurray, four hours north of Edmonton.

“In Edmonton, we saw a lot of smoke from those fires, and a lot of people had to flee their homes,” she says. “We spoke to wildfire scientists here at the university and asked them what kind of data was useful, and what data could benefit from having more satellites in orbit to provide that.”

AlbertaSat members do not receive course credit for their involvement in the group, although it is an excellent way for them to apply what they are learning in the classroom to real-life situations.

“It’s very hands-on,” Haluza-Delay says of AlbertaSat. “All of our coursework focusses on theory, and not so much applications and doing stuff, so this is a really nice way to do some engineering.”

She was inspired to go into engineering after seeing the 2009 Star Trek reboot. “There was a scene where Scotty [played by Simon Pegg] is rushing around, engineering, trying to fix things in a crisis,” she says. “It seemed like the thing I’d like to do: fix things and build things.”

When the Canadian Space Agency launched the fourth astronaut recruitment campaign in June 2016, it received 3,772 applications. After a one-year selection process, just two candidates were selected.

Haluza-Delay isn’t letting those odds prevent her from chasing her dream, though. “They look for well-rounded people, so right now, for the next 10 years, that’s all I can work towards,” she says.

In the meantime, she is considering serving with an organization like Mennonite Central Committee or Engineers Without Borders Canada once she’s finished her bachelor’s degree. Because of her faith, she is interested in creation care and wants to use the engineering skills that she is acquiring to serve society.

“I want to be in engineering to try to develop things that will help with environmental sustainability and things like that,” she says. “When you see pictures taken from orbit, it always reminds me at least how fragile life on this planet can be, and how much we need to protect it.” 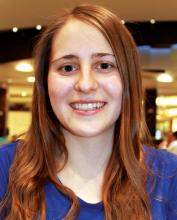 Taryn Haluza-Delay is studying engineering physics at the University of Alberta. (Photo by Donita Wiebe-Neufeld)