Serving in Japan as ‘ordinary people’ 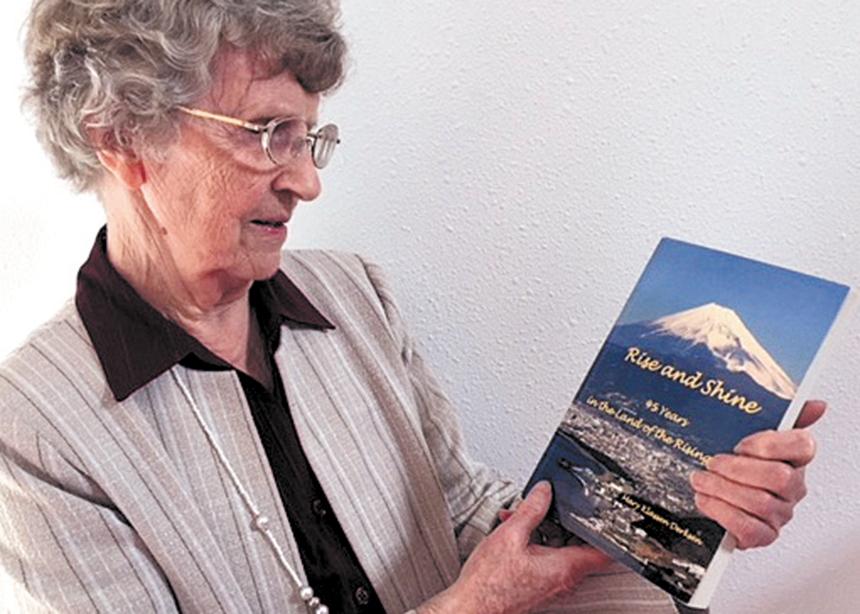 Mary Derksen of Abbotsford, B.C., has chronicled the story of her Canadian missionary family serving in Japan in her new book, Rise and Shine! 45 Years in the Land of the Rising Sun. (Photo by Amy Dueckman)

Retired missionary Mary Derksen didn’t start out to write a book about the 45 years she and her late husband spent as missionaries in Japan. But she has just completed the story of the couple’s ministry there: Rise and Shine! 45 Years in the Land of the Rising Sun. She describes it as “the story of one ordinary Christian family’s life with an extraordinary God in a beautiful land that has become home, Japan.”

Peter and Mary Derksen served God in Japan from 1954-99 with the Commission on Overseas Mission of the former General Conference Mennonite Church. After two years of language study, they did evangelism, church formation, church planting and English teaching in several Japanese cities.

“We were missionaries blundering our way in a strange culture and language among highly educated people,” she recalls. “Missionaries are ordinary people like you. One short-termer said, ‘The importance of being real can’t be overstated. Now I see that if there’s anyone who can’t afford not to be genuine, it’s a missionary. So the next time you catch yourself putting missionaries into a box, take the lid off . . . and experience a bear hug for yourself!’ ”

When the Derksens retired and returned to Canada in 1999, they settled in Abbotsford and related first to West Abbotsford Mennonite Church and then to Emmanuel Mennonite.

During their years in Japan, Derksen had become interested in writing when she had to send reports and letters to supporters back home.

Upon retirement at age 70, she began writing their story, initially for family, but adds, “I got much encouragement from our writers critique group and webinars, and decided to write as a thank you to God and to all our supporters, including family.”

Health problems for the couple put a hold on the project for a while. Her husband experienced heart problems and Parkinson’s disease. Shortly after his death in 2014, she underwent blood transfusions and had a kidney removed.

Then she received a letter from the Oita [Japan] Mennonite Church asking her to write her testimony. It was the last thing she felt like doing. But the church persisted, and she began to write. “To my surprise, I found it quite therapeutic to share our experiences,” she says. “I wrote a long testimony in Japanese.”

The book evolved from there. Derksen credits her editor Alvin Ens and publisher Dave Loewen for helping her through the maze of computer work and the other details that go with publishing a book.

“This book is my expression of thanks to God for restoring my health, and for his marvellous presence throughout our life, my life,” she says. “It is also a thank you to our family, our many friends and churches in Canada and the U.S. who supported us for 45 years in Japan.”

Although the book is not in bookstores yet, a print-on-demand copy is available at bit.ly/mary-derksen-book. 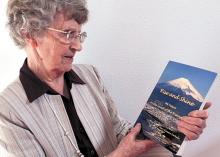 Mary Derksen of Abbotsford, B.C., has chronicled the story of her Canadian missionary family serving in Japan in her new book, Rise and Shine! 45 Years in the Land of the Rising Sun. (Photo by Amy Dueckman)