In search of a collective narrative 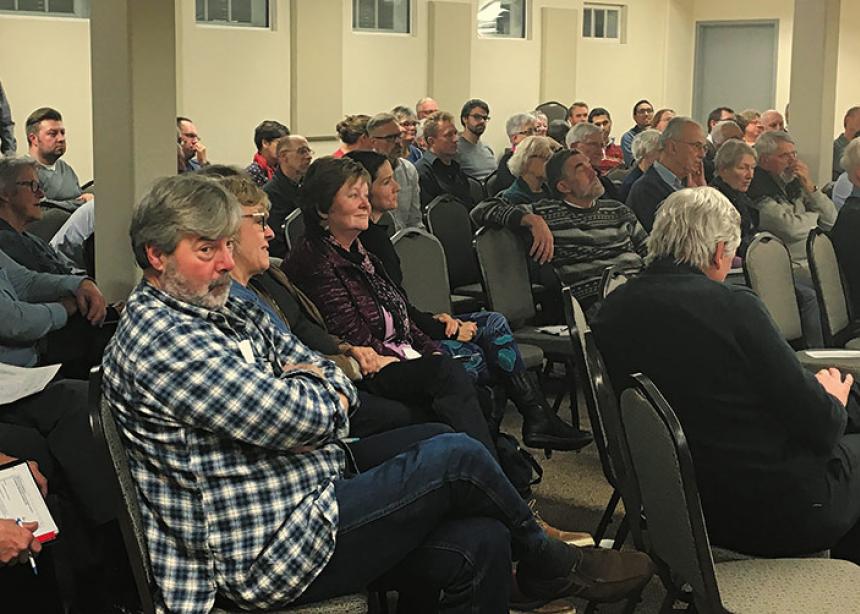 In October, congregants from across Canada gathered for Mennonite Church Canada’s Special Assembly 2017 in Winnipeg, where they voted to implement a new structure, ushering in a new era for the new nationwide church and regional churches. Less than a month later, Manitobans met to discuss the implications of this change for them.

Those gathered at MC Manitoba’s fall delegate session on Nov. 2 at Elim Mennonite Church in Grunthal addressed the new church structure. Within this framework, individual congregations now connect with their regional church for everything, rather than with the nation­wide church for some matters, as they used to do. And this brings many changes to MC Manitoba, like the responsibility for Witness work and a new budget.

Ken Warkentin, the regional church’s executive director, told Canadian Mennonite that the main purpose of the fall delegate meeting is to pass the annual budget, which is usually passed with minimal dispute. This year was quite the opposite. Many delegates expressed concern about the new budget, and it was extensively discussed.

Trends show that people are giving less to churches, which had delegates expressing concern about how they will be able to make the regional church budget when they can’t even make their own church budgets.

Delegates ended up approving the current budget and authorizing the MC Manitoba board to prepare a final version. Many delegates abstained from voting, and a feeling of uncertainty was present in the room.

This feeling came not only from the budget, but from a larger issue: the turmoil of a shifting church structure. Warkentin said that many people are nervous, as they are with every big change, because everything is new and untested.

Adam Robinson, associate pastor of Douglas Mennonite Church in Winnipeg, said that people are missing a collective narrative, and without a vision, they become divided and lost in the details. “I think people want to be excited,” he said. “We want to feel that we know why we’re spending money.” They’re just not quite sure how to get there.

Some voices, despite their uncertainty, said they trust their leadership to guide them through this journey. So how will MC Manitoba do this? Warkentin has already begun looking into creating a church engagement staff to help connect congregations with international and local mission options, and work at fundraising. His role will also evolve to take on more responsibility for the national agenda and communicating well with other regional churches.

MC Manitoba staff are planning gatherings for the near future, at which pastors and congregational representatives can better learn how these big changes will affect congregations and the regional church. Peter Rempel, MC Manitoba’s moderator, said that delegates will have to meet for longer times, and more frequently than the current twice-a-year structure, to cover the additional content. The regional church’s communications team is already meeting to figure out ways to communicate the national agenda to Manitobans during this time of transition and big decisions.

“I think we need new ways of inspiring our people and our congregations,” said Robinson. “It’s the vision and mission stuff that really unites us, and if we’re united enough in that, and excited, almost any structure will work.”