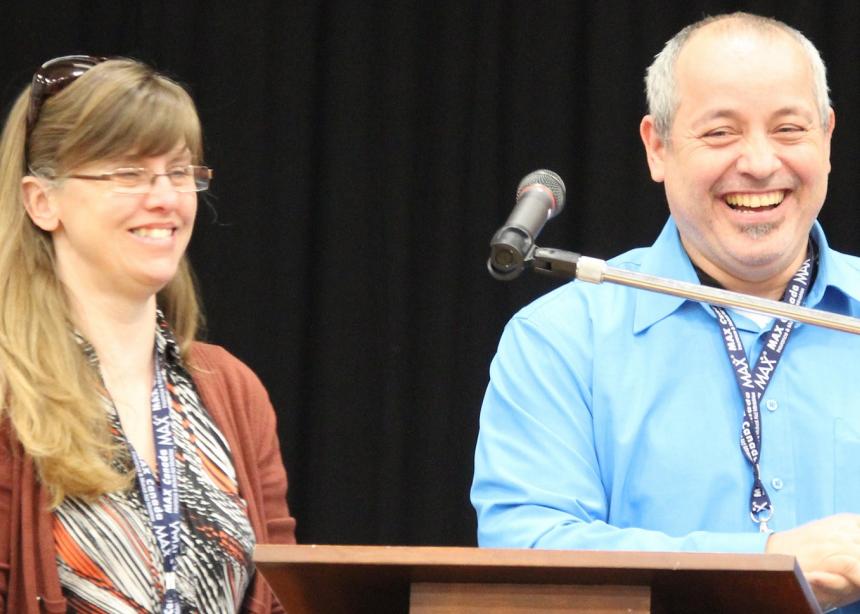 Twenty-five years ago, Michel Monette was selling encyclopaedias door to door seven days a week. One of his fellow salesmen, a Mennonite Brethren man, would take Sundays off to go to a local evangelical church and would do the same Wednesday evenings for Bible study. On Halloween Eve 1991 in Rouyn-Noranda, Monette said to the man, “If you’re such a good salesman, sell me on your God.”

Over the next hour the man answered all of Monette’s questions from the Bible. In the end the man asked, “What do you have to lose to try out Jesus?” That night Monette had a vision where he saw himself in hell. He knew that to prevent himself going to hell he needed to invite Jesus into his life.

In the morning he called his wife, Lyne Renaud, and told her that he was “reading the book, the Bible.”

“What happened to you?” she asked, wondering if he had succumbed to a cult.

A few weeks later, on Dec. 14, they decided they would go to church the next Sunday. About 30 people were there when they arrived late, due to a snow storm. Feeling welcomed, they never stopped going.

In 1998, while reading Rick Warren’s The Purpose Driven Church with Mennonite Brethren leaders, they felt led to plant a church. But it would take six years to come to be. They settled in the low-income Hochelaga-Maisonneuve area of Montreal in 2004, where, for a few short years, the community was ground zero for a war between the Hells Angels and Rock Machine biker clubs.

Settling into Roi des Rois (King of Kings), a Union Baptist building, they started to plant a new community called HochMa, a contraction of the hyphenated community name and the Hebrew word for “wisdom in action.”

Their diverse congregation was non-traditional; they met Sunday afternoon, had no sermon and few regular attenders. Their numbers were also dropping. So they decided in 2008 to merge with the Roi des Rois congregation, which was meeting on Sunday mornings, but numbers were still dropping

In 2009, Lyne had a vision for a church as a café, a safe place to talk, where she and Michel could begin to walk with folk, help them to learn to know God. A year ago, they began to offer a free breakfast on Sunday mornings to anyone who would come. They felt like this was the last thing to try before giving up on the church.

Along the way the congregation decided to look for a denomination. When asked why it didn’t opt to join the MBs, Monette said that Mennonite Church Eastern Canada is closer philosophically and theologically to them, as they want to care for a person’s entire needs, not just the spiritual ones. They were looking for support, not financial aid, and their search led them to Brian Bauman, the area church’s mission minister. His persistence in following up their invitation impressed them.

Thinking about what God is about in MC Eastern Canada, Monette says that he himself is an Anabaptist, one who is willing to agree to disagree, and stay in relationships even when disagreeing. He feels that the area church is part of a denomination with roots, holding on to Anabaptist traditions, from the Swiss and Menno Simons. But with Bauman as a buffer, Roi des Rois is able to innovate according to its place and needs.

Renaud appreciates that the area church accepts her call and gifts, unlike the evangelical denominations they see around them. She is paid eight hours per week by the congregation, while Monette operates his information technology business ITGS.

Monette says he’s “fed up with the reputation of the neighbourhood. God’s kingdom is on earth and not only in heaven.” They want less violence, prostitution and drug addicts, but not by moving the problems elsewhere. They would like the community to improve, and the present residents to be able to stay and benefit from the improvements.

God is moving them to big steps in faith. One of the biggest is their building, which needs upwards of $200,000 worth of renovations and improvements. He dreams of transforming the historical building into a meeting place in the community, a green building, an “embassy of reconciliation.” Monette is the only businessman in the congregation. He sees himself as an entrepreneur and an artist. Such people are risk creators, he says, not risk takers; they create risk for something new to happen.