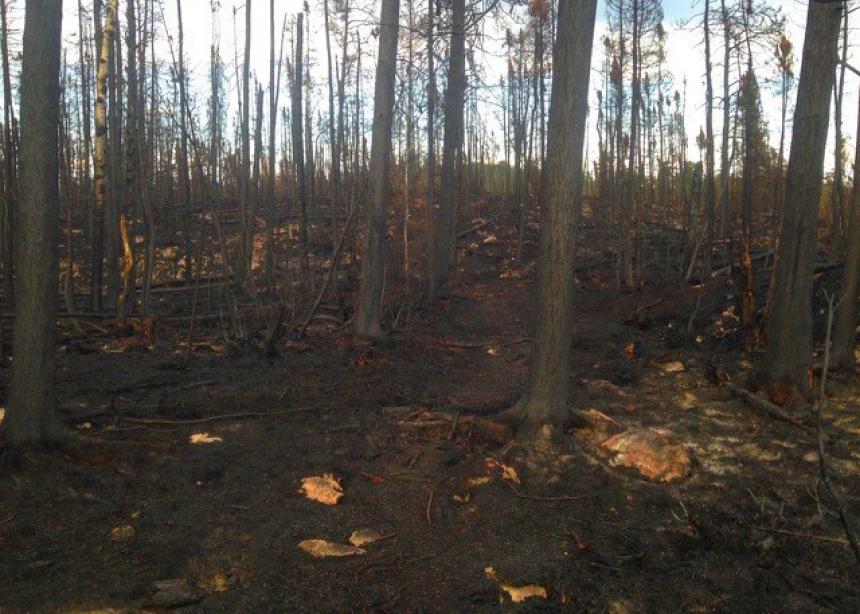 <p>Looking bleak and lifeless today, the burned area surrounding Forest House will explode with life by next summer, says Ric Driediger, who owns the property. (Photo by Sarah Driediger)</p>

“I’m not very good at being helpless,” says Ric Driediger as he reflects on the impact Saskatchewan’s forest fires have had on his business and his life. Driediger and his wife, Theresa, own Churchill River Canoe Outfitters in Missinipe, Sask., 457 kilometres north of Saskatoon. This summer promised to be one of their best, with many bookings. But when wildfires threatened the community of La Ronge, 78 kilometres to the south, burning along the highway between La Ronge and Missinipe, the road was closed and Driediger’s customers couldn’t reach his place.

The media, says Driediger, made it sound like all northern Saskatchewan was burning. Though 125 wildfires destroyed 480,000 hectares of forest, many areas were untouched. Driediger was also frustrated with the government, who allowed mining trucks through, but not his clientele. When the La Ronge fire moved north toward Missinipe, Driediger felt frustrated that there was no plan in place to protect the town.

The nearby First Nations community of Grandmother Bay took matters into their own hands when firefighting crews were unavailable to protect their community. They fought the fires on their own, and when firefighters arrived and told them to leave, they refused, saying it was their community and they were going to save it. In the end, firefighters worked under the community members. “I was so proud that I knew them,” says Driediger.

Though the Driedigers’ Missinipe property was never in immediate danger, Forest House, a remote property owned by the family, came very close to being destroyed. Situated on the shore of an unnamed lake, the property is accessible only by canoe or float plane. Driediger knew the property was in danger and sent two staff members to secure the place and wet everything down with sprinklers. Uneasy with the nearness of the fire, one returned to camp, while the other remained to keep the sprinklers running. The next day Driediger and his son, Dan, travelled to Forest House to check out the situation for themselves.

While they were there, firefighters came and set up their own sprinklers on the property. They advised Driediger and the others to get out as the fire was approaching rapidly. Driediger says they hoped the sprinklers would save the place, but “fully expected it would burn.”

When the Driedigers were able to return, they were overjoyed to discover Forest House still standing. A plastic water jug and a canoe, both of which had been left on the dock, were partially melted. Yet Driediger and his family stood in the yard of Forest House, picking and eating saskatoon berries from a bush right beside the burned area. He heard a squirrel chattering and wondered how it had survived. He saw a grouse with singed tail feathers and wondered what had happened to her chicks.

“I totally feel it’s a miracle,” Driediger says. Alluding to Troy Watson’s series of columns in Canadian Mennonite (“Life in the Postmodern Shift”) Driediger explains: “Forest House has always been a ‘thin place’ for me. When we went there after the fires it felt like God was sitting there with us, as if God thought it was too important to burn.”

Driediger wonders why Forest House was spared. That many people told him they were praying for him and his property seems both comforting and unsettling. “Our neighbour’s house burned and others that we know also lost property,” he says. “Why didn’t ours burn?” He ponders the “age-old question” from the book of Job: why does one person suffer while another is spared?

Yet, “even in the power of destruction there is beauty,” he says. “By next year the place will be red with fireweed, and the blueberries will be thick.” Morel mushrooms will be there in abundance, too.

“Life explodes after something like this,” he says. In the destruction and re-growth, Driediger sees a parallel to spiritual trauma. “Often when we go through the worst, then life explodes.”

I’m So Dry
By Ric Driediger

I’m so dry. I need rain—really bad. My muskegs are so dry. Instead of water oozing up when something walks on my muskegs, all I get is dust. The moss under my forests just crunches when it is stepped on. My beauty seems to be leaving me as I get dryer.

I’m so dry. I need rain—really bad. This dryness makes me really tense, really uptight. I just don’t feel like my normal self. I feel like I can’t look after myself when I’m this dry. When lightning strikes, I can’t put the fire out anymore. I need the help of others to look after me.

I’m so dry. I need rain—really bad. My moss, my forests, my muskegs are like a huge sponge. I am waiting, with my pores wide open, waiting for the rain—waiting for a big drink. When it finally rains—I will be ready. I will soak up the water. I know I can hold a lot. My muskegs and forests will share this water with the lakes and rivers. When this water does come, I will blossom with flowers and berries. My moss will again turn green.

But until then, I’m so dry. I need rain—really bad. 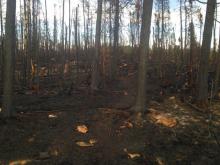 Looking bleak and lifeless today, the burned area surrounding Forest House will explode with life by next summer, says Ric Driediger, who owns the property. (Photo by Sarah Driediger) 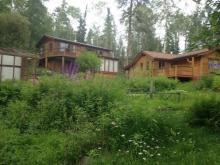 Forest House survived the wildfires that destroyed the surrounding forest. Ric Driediger, who owns the property, ponders why his place was spared while others were not. (Photo by Sarah Driediger)