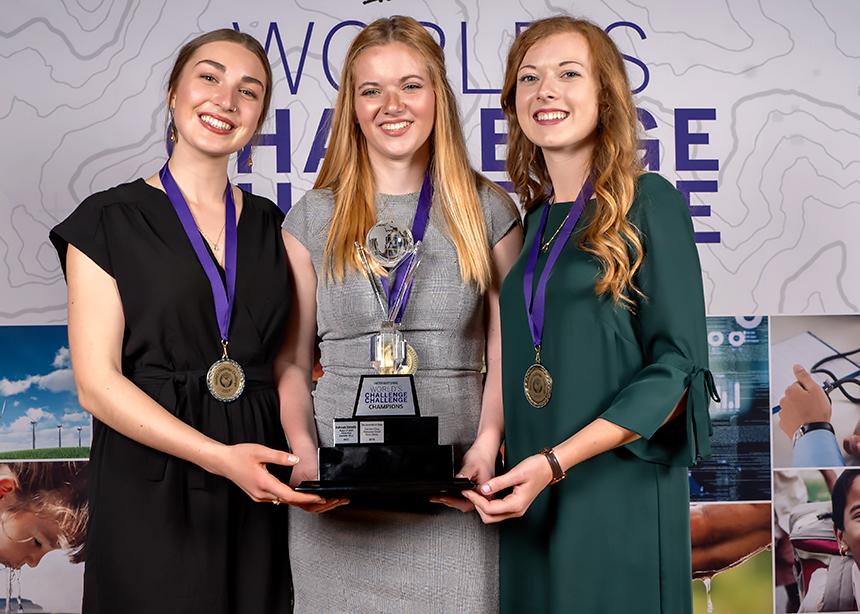 For many women around the world, accessing pads, tampons or menstrual cups isn’t as easy as making a trip to a drug store, nor is it affordable. Some women and girls resort to making their own menstrual products out of things like mattress foam, newspaper or old clothes, which can cause problems like tetanus and urinary tract infections, or even worse infections.

Last November, six students from Conrad Grebel University College took part in a Mennonite Economic Development Associates (MEDA) competition called MEDAx, with an idea for a product called SheCycle: an antimicrobial reusable pad that can be locally sourced and distributed in Uganda. They were supported through the Kindred Centre for Peace Advancement through Grebel to attend MEDAx.

Although the group didn’t win the pitching competition, three of the team members took the idea forward and are gaining ground internationally. Anna Kuepfer, 22, Abby Loewen, 20, and Leah Wouda, 21, are working together to build SheCycle, a budding social enterprise.

Kuepfer, a health sciences student at Grebel was inspired by the women and girls of Uganda for this project. She lived in the central African country for two months in 2017 while giving vaccines with a volunteer group through UNICEF.

“For me in particular it hits home,” she said. “I have been to the schools where these girls are lining up in the longest lines you can imagine to receive a tetanus vaccine and it’s not even solving the whole problem.”

Loewen is studying math and business while Wouda is studying international development. The trio felt strongly about accessing safe and affordable menstrual products and decided it was a venture worth pursuing. Kuepfer and her teammates brought the idea to the World’s Challenge Challenge at the University of Waterloo in March.

This initiative from Western University in London, Ont., aims to bring students from universities all over the world together to bring forward ideas to address a global issue. Kuepfer, Loewen, and Wouda won and graduated on to the global final in London, Ont., earlier this month. Their pitch was so well received they won first place and $30,000 towards their idea.

Kuepfer, who grew up attending Wellesley Mennonite Church, said their idea is unique because of the microbial nature of the reusable pad. Many other organizations are fulfilling the education piece and helping women and girls access menstrual product, but their product will fill a gap. She said that many women and girls are too embarrassed to dry their pads outside, where the UV rays will disinfect them. Instead, they will sometimes use the pads when they’re still damp and dirty, which can lead to infections.

When girls and women don’t have access to pads, or are sick with infections, they won’t go to school or work, Kuepfer said. A lack of education leads to women having babies younger, which keeps them in a cycle of poverty.

“We want to make sure periods are not the reason girls are missing school, ensure they have that education and are taking more ownership over reproduction, and essentially they have the tools to break out of poverty relating to the factors that have to do with menstrual hygiene,” she said.

Paul Heidebrecht, the director of the Centre for Peace Advancement said the centre was pleased to bring the three students together in the first place.

“It’s a privilege to support students like Abby, Anna and Leah, who are not only passionate but are persistent and resourceful. I think their diverse skill set and entrepreneurial mindset will serve them well going forward,” he said.

Kuepfer said the team is using their prize money to incorporate their organization and develop a prototype. They have bigger plans for down the line.

“We want to hire local women entrepreneurs to manufacture pads themselves, hire local women to be educators. Uganda is also a place where we can locally source all our materials, so we can also contribute to the local economy,” she said.

For SheCycle, Uganda is only the beginning. “This is an issue worldwide,” Kuepfer said. “Who knows where we might end up and what our target population will be down the road?” 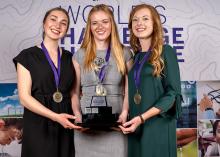 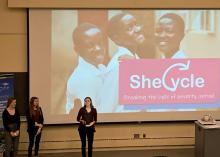