Rape culture from a Mennonite perspective 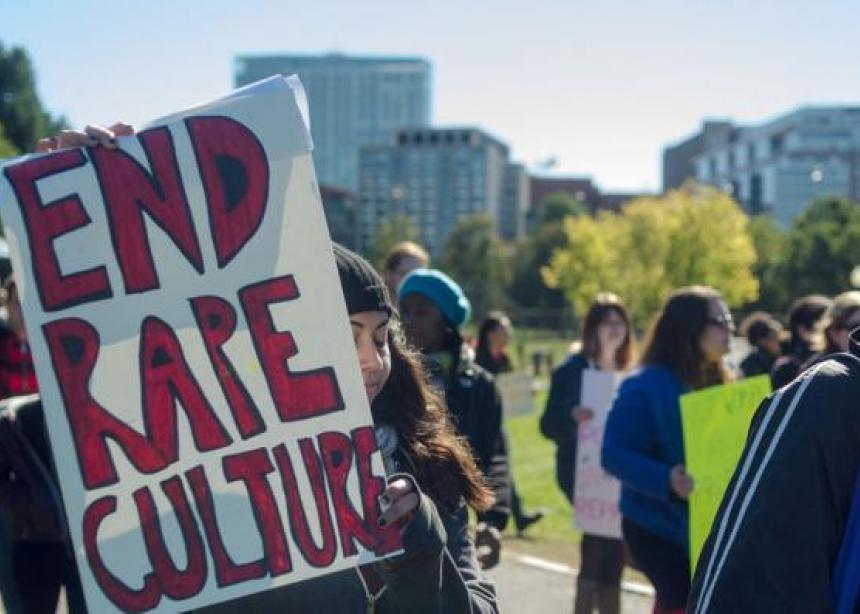 The murderer was active on men’s rights awareness forums, where women are often highly objectified. They are seen as non-human by many in such groups, and, at the very least, less than men.

What many people don’t realize is the sexism that women endure on a daily basis. Women are blamed for being raped and harassed, and taught that male sexual violence is relatively normal.

Many women within Mennonite churches have experienced sexual violence and harassment, but they often don’t have a forum of their own to discuss these issues. So here goes:

Several weeks ago I posted an article called “A gentleman’s guide to rape culture” on my Facebook timeline. The general premise is that if you’re a man, you’re a part of rape culture, whether you’re a rapist or not. I know, it sounds awful, but try being on the other side.

Most of the responses I received were positive, many were from male friends of mine. Unfortunately, I received some negative comments from a friend of mine and a cousin.

What these men don’t understand is what I go through on a regular basis.

I doubt my cousin would be so selfish if he knew how many times I’ve been sexually harassed. I would like to think that if my friend knew that a stranger asked me for oral sex when I was 15 years old at a youth car-wash fundraiser, he would be more compassionate.

When I posted the article, I had hoped people would take a moment to reflect on rape culture from a woman’s perspective: the fear, vulnerability and blame that we experience regularly. But unfortunately, my cousin and friend couldn’t see past their own bruised egos.

This has been my experience on many occasions. The same is true for my friend Melanie Kampen.

She says that nearly every day for several months on her walk to school she was harassed by men. “They would say things like, ‘Hi, beautiful,’ ‘Hey, sexy,’” and “Want to f***?’”

Although she was offended that the cat-callers reduced her humanity to her sexuality, Kampen often didn’t feel safe enough to confront them to tell them so. But one day she got up the nerve to tell off three of her regular cat-callers.

“I turned around, marched straight up to the building they were standing in front of,” she says. “Two of the older guys ran inside. I talked to the younger guy who was standing there. I asked him, ‘Did you whistle at me?’ He said, ‘No, those two other guys did.’ I said, ‘That’s very disrespectful. Next time can you tell them not to?’ He said ‘yes.’ I said ‘thank you’ and it never happened again.”

Unfortunately, most situations aren’t resolved that easily, and Kampen continues to deal with sexism.

Hannah Goossen, 26, attends First United Mennonite Church in Vancouver. In her case, being objectified and treated with disrespect didn’t stop when she dismissed the person. One day she was out with a friend when a man approached her with a rude opening line.

“The conversation only got worse from there and no matter what I said, he would not leave me alone,” she recalls. “He was forcing his attentions on me when I hadn’t sought them and continued after I told him I wasn’t interested. It was as though he felt entitled, that just because he approached me I should feel obligated to give him my time.”

Through initiatives like Hollaback, women are supporting one another. The movement to end street harassment works through a network of local activists around the world.

But this often doesn’t happen within churches.

Kampen suggests hosting regular forums for storytelling on a community level. There, women can share their stories, support one another, and educate others within the church, including those who may be perpetuating the cycle of sexism.

Goossen agrees that awareness and education are the keys to addressing the issue.

“Men have held most of the power for so long, the imbalance is written into our lives in ways that, even as women, we don’t always recognize,” she says. “The church would benefit from teaching women their value and building them up.”