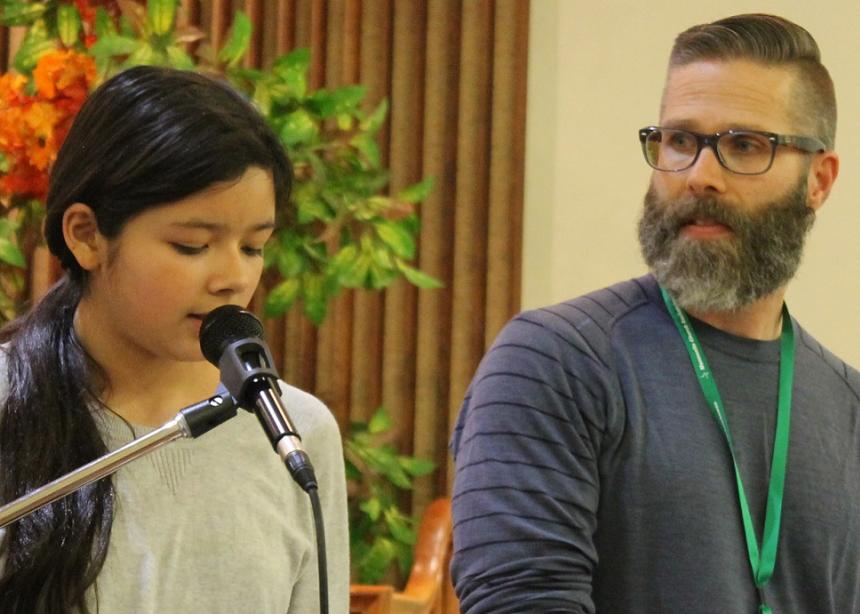 At the MC Saskatchewan Equipping Day Abby Heinrichs and her father Steve tell their personal stories in a workshop entitled ‘In your light, we see light: The church and Indigenous solidarity.’ (Photo by Donna Schulz)

Setting goals is a good practice, but how does a faith community translate those goals into reality?

At their Refresh, Refocus, Renew mini-retreat in September, members of Mennonite Church Saskatchewan identified three goals for the coming years. Although the reference group appointed to work with these goals will unveil a plan for their implementation at the regional church’s annual delegate sessions next March, Equipping Day planners found creative ways to put the three goals into practice already.

Held annually, Equipping Day offers workshops on a variety of topics and is open to everyone. Zoar Mennonite Church in Waldheim, Sask. hosted the Oct. 28 event.

In answer to the first goal of “developing a deeper spirituality,” Claire Ewert Fisher presented a workshop entitled “Spirituality in work clothes.” Using the “Circle of sensibility” adapted from Urban Holmes III’s A History of Christian Spirituality, she helped participants identify their own type of spirituality.

While some believers are motivated by Bible study and theological writings, others experience God most strongly through singing and extemporaneous prayer. Some understand God to be a mystery and value retreat and silent prayer as an expression of faith. Still others seek a kind of embodied spirituality through service to others.

Ewert Fisher noted that each quadrant of the circle has strengths and dangers, and that all four quadrants are needed. The church “needs every aspect [of spirituality] to achieve balance,” she said.

“If you want to grow in your faith, you should move in the opposite direction,” she added. Someone who appreciates the intellectual aspects of faith, for example, may be uncomfortable with solitude and contemplation. But moving beyond one’s own comfortable quadrant and into a new area may be the best way to grow spiritually.

Cindy Wallace’s “Anabaptist heroes” workshop offered a response to the second Refresh, Refocus, Renew goal: “to embrace and live out Anabaptist theology.” Rather than hearkening back to the pages of early Anabaptist history, Wallace challenged participants to identify heroes who embody Anabaptist values today.

She talked about Rosemary Freeny Harding, an African-American woman who identified with the Mennonite church and tried to live out the Anabaptist values of peace and nonresistance during the American civil rights movement of the 1960s.

She said that in reading or hearing about the lives of others, she asks herself, “Where do I get really curious or uncomfortable, and why?” Wallace learned from Freeny Harding’s writings that there needn’t be a distinction between spirituality and activism. Freeny Harding, said Wallace, “practised activism in being family.”

Reading biographies and memoirs is one way to find heroes, Wallace said, but another is by listening to the stories people tell. People’s stories have much to teach, she added, encouraging participants to “let the stories themselves open us up to some of our blind spots.”

A third goal identified during September’s mini-retreat was that of “service to the community and to the world.” Two workshops spoke to this theme.

In “Don’t be a culture monkey,” former MC Canada Witness worker Todd Hanson offered participants tools with which to engage in cross-cultural communication.

He shared the story of a monkey sitting by a river that noticed a fish struggling against the current. Thinking the fish was trying to get out of the water, the monkey decided to help by grabbing the fish and tossing it on the shore. The monkey was happy when, after a while, the fish quit struggling and became calm.

A “culture monkey” reduces people groups to their essential identifying traits. This is called essentialism and should be avoided, said Hanson. Rather, he said, “Take what people say about their own culture as a personal observation, which should not be generalized to other people who come from the same background.”

Steve Heinrichs, director of Indigenous relations for MC Canada, together with his 11-year-old daughter, Abby, presented the day’s final workshop, which was for all participants. In their presentation, “In your light, we see light: The church and Indigenous solidarity,” the father and daughter told their personal stories—Abby as a biological daughter of the Sto:lo First Nation, and Steve as the son of Mennonites who settled on land that once belonged to the Sto:lo people.

Together they urged participants to join in solidarity with Indigenous peoples in lobbying federal MPs to support Bill C-262. The bill, which will come up for second reading in the House of Commons on Dec. 4, would help to ensure that Indigenous human rights are protected. “We can repair some of the injustice of the past,” said Steve. “I have hope in those who are willing to walk in the steps of a brown Jesus.”

At the MC Saskatchewan Equipping Day Abby Heinrichs and her father Steve tell their personal stories in a workshop entitled ‘In your light, we see light: The church and Indigenous solidarity.’ (Photo by Donna Schulz)

Claire Ewert Fisher indicates the four quadrants of the spirituality wheel in her workshop, “Spirituality in work clothes.” All four quadrants are needed to achieve balance in the church, she says. (Photo by Donna Schulz)

Cindy Wallace asks participants in her ‘Anabaptist heroes’ workshop to consider people in their own lives who reflect Anabaptist values. (Photo by Donna Schulz) 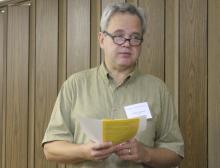