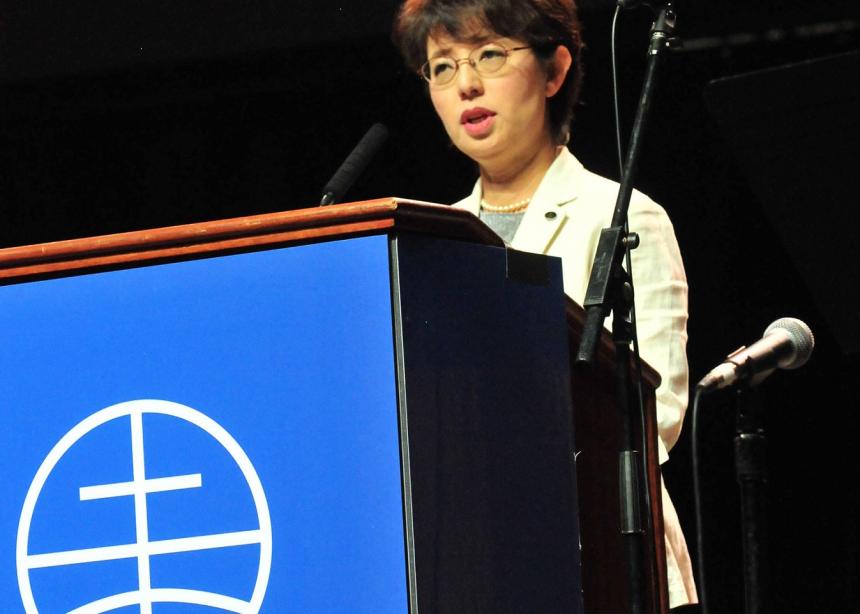 Yukari Kaga, a pastor from Japan, admitted Peter’s praise in his letter to the early church seems “a little strange to me.”

“I have a question, she said. “How can we praise the Lord in such a painful situation?”

When we struggle with fear or anxiety, our hearts shrink, Kaga said. Then we get depressed, and self-pity covers us.

“However, there is a life that gives a true life,” she said. The Scripture passage for the evening worship was 1 Peter 1:3-9.

The Chinese character (shared by the Japanese written language) for mercy resembles an antique clothing iron. Mercy is like that iron—not too hot or too cold, but “exactly the right temperature for us,” she said.

“This is the work of the Holy Spirit,” she said. “It irons our heart—our shrunken heart—with the exact right temperature many times again and again.”

“Our faith hasn’t disappeared because of God’s shield,” she said. “This is our Christian hope.”

We can also praise God like Peter in this letter, she said.

Kaga ended by reminding those gathered at worship that, “Jesus’ death has swallowed death in victory,” she said. “This is the work of God’s great power.”

Kaga is the pastor of numerous congregations, including Japan Mennonite Obihiro Christ Church and several small churches in the Tokachi region of Hokkaido. She serves her conference as the secretary of the executive committee and also serves at the Mennonite Education and Research Center and as chief director of the Peace Mission Center.

A graduate of Eastern Mennonite Seminary, Harrisonburg, Va., with a degree in pastoral counseling, Yukari also holds an M.Div. from Tokyo Biblical Seminary.

The GCF, formed in 1998, is a growing global initiative that seeks to bring leaders of all Christian churches in the world together to foster mutual respect and to address common challenges.

At the end of the 20st century, Miller said, there were 30,000 distinct Christian denominations.

The assembly also heard a message from the Catholic Church delivered by Monsignor Gregory Fairbanks of Philadelphia.

The worship service in the Pennsylvania Farm Show Complex Arena began with music from Indonesia, Japan, India and more. The service ended with an upbeat rendition of “When the Saints Go Marching In.”

Anna Groff is executive director of The Mennonite. This article was written for Meetinghouse, a group of Mennonite publications. 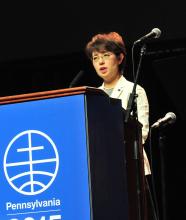 In the Wednesday evening worship Pastor Yukari Kaga reminds those gathered at Mennonite World Conference that, “Jesus’ death has swallowed death in victory,” she said. “This is the work of God’s great power.” (Photo by Dale D. Gehman)