Portrait of a strong woman 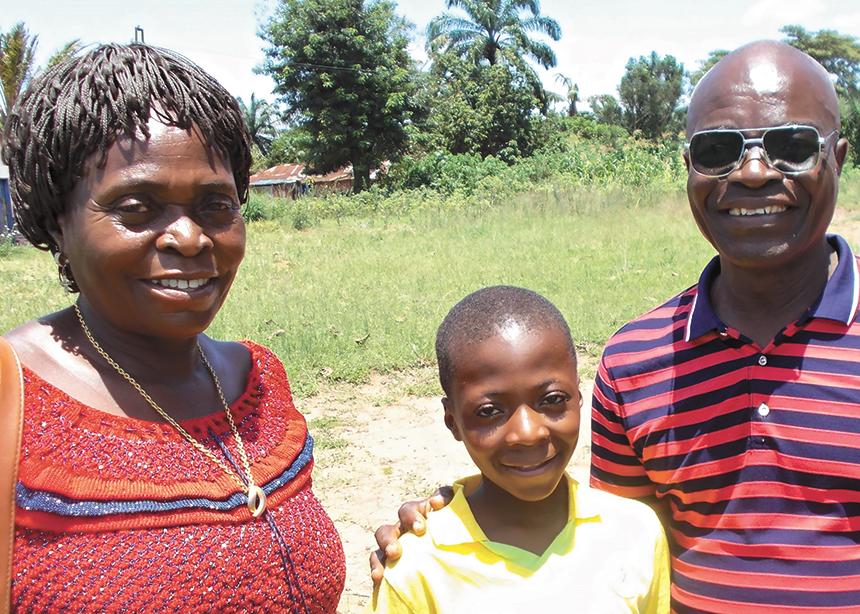 Adolphine Tshiama, left, is pictured with Kanku Ngalamulume and Joseph Nkongolo, coordinator of the Department of Service and Development of the Mennonite Church in the Congo. (Photo by Rod Hollinger Janzen)

From mid-2016 to mid-2017, the Kasai region of the Democratic Republic of Congo was devastated by an armed conflict. Rebel militias gathered around a traditional chief, Kamuina Nsapu, to fight against the central government. They attacked posts where security forces were located and sometimes attacked schools, churches and hospitals.

An estimated five thousand people were killed and 1.5 million more were displaced by the violence.

In this context, the church in general—and Mennonite churches in particular—are present and sought after. They play an essential role in the survival of the population, with the support of Mennonite Central Committee (MCC).

Here is a portrait of one sister in Christ who is very engaged in helping her compatriots.

Adolphine Tshiama is a strong woman. Her strength comes from within. At first sight, she is friendly and in no hurry, taking time to greet people. But a closer look will reveal her eyes sparkling like diamonds and show the degree of her perseverance and determination.

Tshiama is currently the principal of an elementary school with 1,400 students and a staff of 22 under her direction.

Between 2004 and 2007, her church went through an intense conflict, and she became a leader. She regularly organized informal prayer groups so that the women of the church could pray for an end to the conflict.

This is a woman with a profound faith, and she doesn’t hesitate to say that prayer is the most important activity for a believer.

Tshiama has also been touched by grief. She lost her husband in 2011 after 33 years of marriage. In May 2017, in the context of the violence, she learned that her brother and wife, along with their son, his wife and their children, had all been massacred by a rival ethnic group. Completely distraught, she sent word to her friends, asking them to pray for her.

The following month, MCC asked that the church in Tshikapa evaluate the needs of the large number of displaced persons that had inundated the city in an effort to escape the violence. Tshiama, who was suffering deeply from her own loss, was called to serve others.

She found the strength to do the impossible. She sat and cried with many displaced persons, listening to their stories of horror and unbelievable suffering. She was able to say to them: “Yes, I know. I believe you. I understand your pain. . . . I am also suffering, because that has happened to me.”

The evaluation gave rise to the project of recovery of the Kasai, with emergency funding providing food and school supplies, as well as start-up money for income projects for numerous displaced families.

One day, Tshiama received a phone call that turned her life upside down. The wife of her brother and the wife of her nephew, along with their two children, had been found alive in a town a few hundred kilometres to the east of the place where her brother and nephew had been assassinated. For Tshiama, this was like a resurrection. She was filled with joy.

Making the love of God shine

Somehow, Tshiama had eyes to see one young boy among five thousand people. Kanku Ngalamulume saw his parents and siblings beheaded by rebels before he fled to Tshikapa, following other groups of people. Temporarily housed with a family, he kept losing weight.

It was then that Tshiama proposed, “I will take him into my home.”

Kanku is now going to school, he is eating well and smiling, all because the Lord gave him a new mother, a new family.

Tshiama is serving her church by fighting against the deep darkness of evil, by taking care of the victims. The love of God shines through her, because she shares hope with vulnerable and displaced persons. 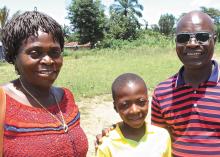 Adolphine Tshiama, left, is pictured with Kanku Ngalamulume and Joseph Nkongolo, coordinator of the Department of Service and Development of the Mennonite Church in the Congo. (Photo by Rod Hollinger Janzen)