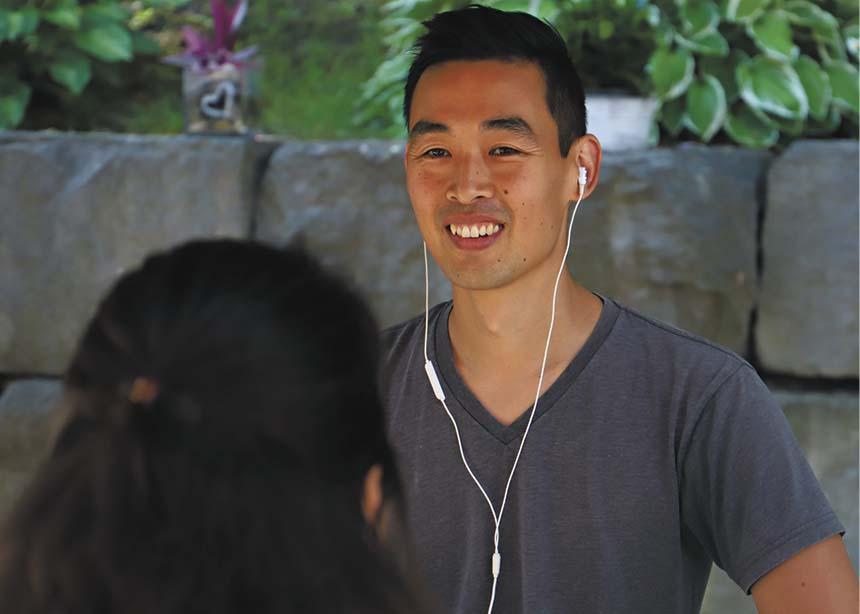 Ken Ogasawara counts it a “sacred gift” when he is trusted with another person’s story. As he shapes that into a podcast episode, he is mindful of “doing justice to their story.”

Ogasawara, who works on the community engagement team at Mennonite Central Committee (MCC) Ontario, is the producer and host of Undercurrents, a podcast series that tells stories of “pain, redemption, challenge and hope.” The stories come primarily from MCC Ontario’s program staff and community partners.

He pitched the idea of starting a podcast in the interview for his current job, which he has held for five years. He values this medium because it allows him to quote the storyteller at length, saying it is a way to “let them tell their own story in their own voice.”

The beauty of podcasts, which Ogasawara calls audio documentaries, is that they are relatively simple to make and easy to digest, meaning people can listen as they do other things.

While Undercurrents is his first podcast, Ogasawara does have eight years of experience in filmmaking with a friend, but he says he was “never part of the visual side.” Instead, his interest was always in listening to the story, and “getting the story down to its essentials.”

His love of writing began when he participated in MCC’s Serving and Learning Together (SALT) program as a young adult. With no internet in Uganda, where he lived for a year, he composed long, handwritten letters to his parents, who typed them and sent them out to friends and family in a mass email. He calls that an early form of blogging.

In September, MCC Ontario launched the second season of Undercurrents, with plans to produce seven episodes, including stories about refugee resettlement, restorative justice and living wages. There is also an episode on Palestine and Israel, as there was in the first season, the only international story addressed so far. There were six episodes in the first season, including one about “what it takes to be a bridge from prison to community.”

One episode in the new season features the story of a man who worked at an Indigenous residential school when he was a young man and how he “spent the rest of his life trying to hold himself accountable” for that. According to Ogasawara, the second season is “a lot richer and a lot deeper in terms of diving into people’s stories.”

The name Undercurrents is about telling the “underlying story behind a surface observation,” says Ogasawara. A whole lot of assumptions go into people’s impressions of someone who is homeless or imprisoned, for example, but Undercurrents goes deeper, getting at their backstory and exploring the life circumstances that put them where they are.

Ogasawara’s interviews may take up to an hour-and-a-half, but he uses only roughly twenty minutes of that content. His job is to summarize and trim it down. “Where is the core of the story?” he asks, acknowledging that “what gets left out is as important as what is included.”

Ogasawara makes sure that anyone he interviews, and the program staff they relate to, get to hear the completed podcast before he publishes it. He says it is a “sacred gift” to be trusted with someone’s story.

To create an episode, Ogasawara layers five or six tracks, including the subject’s audio, his narration, a musical score, and sometimes sound effects, if they can help to “put the listener in a scene.”

Some of the stories can be pretty heavy in terms of their subject matter, with lots of complexities and a strong “emotional impact,” but Ogasawara says he tries to focus on the “human, hopeful part.”

He hopes that Undercurrents’ listeners will gain a new perspective on the stories they hear, and on their own life. “They are compelling stories, but what are we compelled to do?” he asks. He hopes listeners might become motivated to volunteer in MCC’s programs, advocate for others in need, and take these stories to their churches for discussion.

Ogasawara says that reaction to the first season of Undercurrents has been overwhelmingly positive. Episodes are being used by Sunday school classes, pastors, and a professor who has made the podcast mandatory listening for social-work classes. Ogasawara intends to produce a resource guide with discussion questions that could go out with each episode.

He says he does intend to offer “some lighter fare,” like an episode about the New Hamburg Mennonite Relief Sale, or the heifer sale, to reflect the different communities that support MCC.

He is particularly grateful for the support of sponsor Kindred Credit Union, which he describes as a “very supportive” partner, providing funds for assistance in editing and research.

This article appears in the Nov. 8, 2021 print issue, with the headline “‘Doing justice to their story.’” Do you have a story idea about Mennonites in Eastern Canada? Send it to Janet Bauman at ec@canadianmennonite.org. 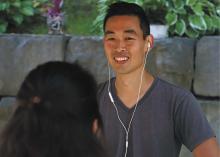 A screenshot of Ken Ogasawara’s timeline, in the middle of editing an episode of the podcast Undercurrents, which he hosts and produces as part of his communications role at MCC Ontario. (Screenshot by Ken Ogasawara)