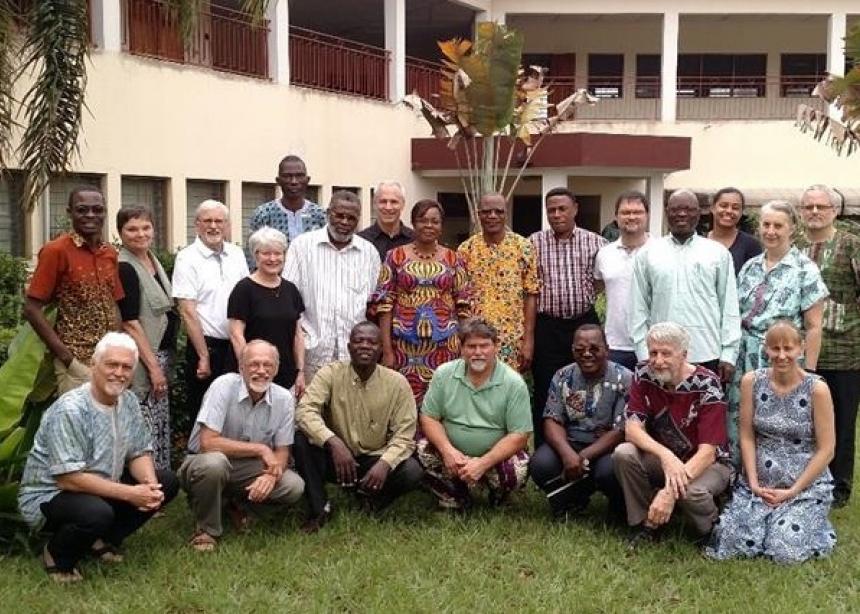 Participants at the Francophone Mennonite Network meet in Ivory Coast to discuss plans for the new Justice and Peace Training Centre: Anabaptist Seminary. The Network is a ministry of Mennonite World Conference. (Photo provided)

A shortage of French-language Anabaptist literature and training motivated 21 participants from eight countries on three continents to gather in Abidjan, Ivory Coast, Sept. 27-29, 2017, in search of a solution.

They worked toward creating a consortium of theological schools and partner institutions to develop an online training program in Anabaptist theology for French-speakers in Africa, Europe and North America.

Blough has served with Mennonite Mission Network in France since 1975, teaching about Anabaptist life and thought in universities and congregational settings. Blough is a foremost authority on Anabaptism in France and often gives lectures in conferences about Reformation history.

Although there are Mennonite Bible schools in many countries where French is the educational language, there is only one university-level theological program taught from an Anabaptist perspective in the French language, at the small Bienenberg seminary in Switzerland, Blough said.

A proposal presented by a committee that had been named at a 2014 meeting of the Mennonite Network of French-speakers in Kinshasa, Democratic Republic of Congo, served as the foundation on which the September gathering built. Attendees decided that the curriculum will focus on Anabaptist issues of justice and peace.

Presenters from FATEAC and Fuller Theological Seminary in Pasadena, California, described the advantages and challenges of their existing online theological programs.

Toni Krabill, who worked with Fuller's program that began online courses in the 1990s, said that participation in off-campus study has grown by 50 percent in the past four years. However, an essential component of spiritual and theological learning is the community of professors and students in which concepts are modeled and godly character is developed. This is hard to develop when people are not physically present with each other.

One way Fuller addresses this problem is to encourage online students to be active in a local congregation and to interact with theologians in their communities. Fuller also adapts teaching practices, so that professors become facilitators of student-centered learning, and create forums in which students share more personally than they might in traditional classrooms.

Krabill and her husband, Matthew, are preparing to join the Mennonite Mission Network staff at the Centre Mennonite de Paris (Paris Mennonite Center) in 2018.

Jean-Claude Girondin, who has a PhD in sociology, teaches at an evangelical seminary in France and is pastor of a Mennonite church near Paris. Originally from Guadeloupe, Girondin explained the importance of creating an intercultural, rather than a multicultural, program.

“Multiculturalism is a juxtaposition, sometimes an opposition, of side-by-side cultures,” he said. “Interculturalism includes reciprocity, relationships and valuing each culture. The important question is, 'How to give power to each culture [involved in the project]?’”

A starting point must be program leadership that represents the culture of each participant, Girondin said.

Martine Audéoud, serving with Mission Network in administrative and teaching roles at FATEAC, said that this institution insists that half of the books in their library must be written by African authors.

By the conclusion of the three-day meeting, the new program had a name, Centre de formation à la justice et à la paix: Centre universitaire anabaptiste [Justice and Peace Training Center: Anabaptist Seminary]. It will be housed at FATEAC, which is already accredited by theological organizations on the three continents involved in the project. Any of the participating institutions may propose courses. A governing body began functioning in January 2018.

Fabéadama Traoré, a Bible translator and Mennonite pastor from Burkina Faso, is enthusiastic about the new online program. He said it is difficult for over-worked pastors and their families to take time away from their congregations.

“The need for training of God's servants is urgent in Burkina Faso,” Traoré said. “This initiative offers an excellent way to help them advance in their knowledge. E-learning in Anabaptist theology is a welcome remedy for our situation.”

Francophone Mennonite Network is a ministry of Mennonite World Conference.

The Abidjan gathering received significant funding from the Schowalter Foundation, in the U.S. Founding members of the online Anabaptist consortium include 14 schools and institutions.

Participants at the Francophone Mennonite Network meet in Ivory Coast to discuss plans for the new Justice and Peace Training Centre: Anabaptist Seminary. The Network is a ministry of Mennonite World Conference. (Photo provided)