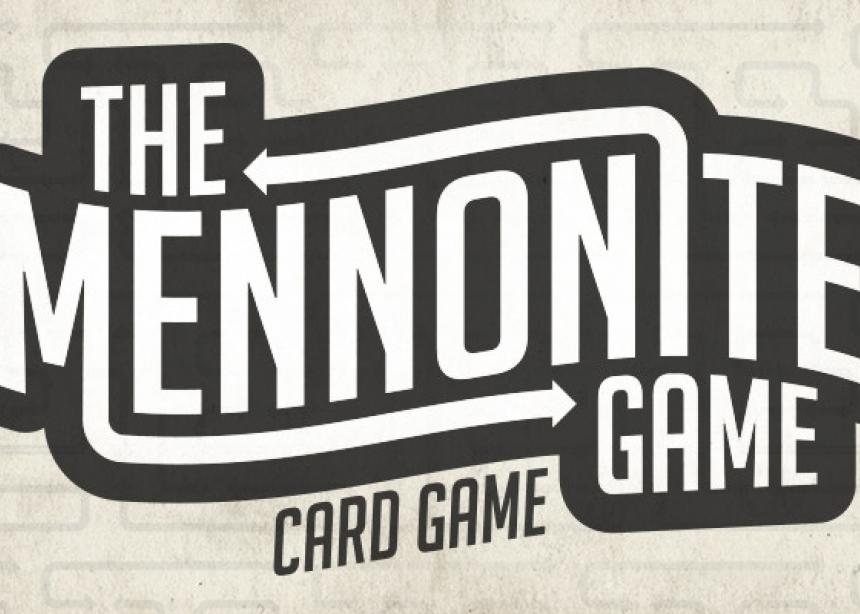 While plenty of Mennonites have played the “Mennonite game”—the Anabaptist version of six degrees of separation—only a select few have played Mark Eash Hershberger’s version. But that’s about to change.

Hershberger, a 2010 Goshen College graduate, created “The Mennonite Game” card game in which players strategically “discover that they are connected in various ways” through drawing cards and using their various ties and experiences, such as realizing that someone is your “brother’s roommate's sister’s ex-boyfriend’s high school teacher,” according to a Hershberger’s description of the game.

While Hershberger originally began creating the game three years ago, he only recently shared it with the broader community after finalizing its design and logistics.

With the creation of a Kickstarter campaign and a quick post on Facebook, Hershberger’s card game was soon being shared among dozens of interested patrons. His initial goal was to raise $3,750—just enough to fund the production of the cards. However, within 48 hours of sharing the campaign, Hershberger’s goal was met, and funds kept rolling in. So much so that “stretch goals” such as thicker cards, more character and event cards, and shipping to Canada became a possibility.

“It was huge to get that support from everyone,” Hershberger said. “That really spread the word fast . . . A lot of people I don’t know have shared [the Facebook] post. It’s been really helpful.”

Hershberger began creating “The Mennonite Game” card game after he decided to push himself to create a product that implemented his love for design and illustration. He said these grew a lot during his time at Goshen College while he took a handful of figure classes.

“I wasn’t sure if I was going to sell it,” Hershberger said. “I just wanted to have it to just challenge myself. I like having side projects.”

When it came time to figure out what his side project would be, Hershberger said he stuck with what he knows best: Mennonites and card games.

“I thought it would be interesting to have a card game where your objective is to put characters together in a way that is basic but also challenging and strategic,” he said.

Hershberger spent three years perfecting “The Mennonite Game” card game, beginning the design by writing on index cards to work out the mechanics of the game. From there, he began illustrating the cards. Each card in the deck has meticulously detailed illustrations and designs of characters and events, many of which have Mennonite characteristics. In fact, there’s even a card with an illustrated Menno Simons on it. After the illustrations were completed, Hershberger play-tested the card game with his friends and family.

Wondering whether you have to be a Mennonite to play the card game? Hershberger said that while the title may seem like only Anabaptists can play, the game is for everyone, no matter their faith identity.

“There are some event cards that are specific to Mennonites, like Menno Simons and Mennonite Conference. But there are a lot of aspects that people who are not Mennonite can relate to and appreciate,” Hershberger said.

Hershberger graduated from Goshen College with a degree in art and a concentration in graphic design. He and his family live in Goshen, and works as the media arts designer at River Oaks Community Church.

Hershberger held a Kickstarter campaign in which 270 backers pledged $12,692 to help bring this project to life. According to a Facebook post, he’s are getting everything ready for print production. You can follow the project through his Facebook page. To view a video about the project, go to: https://www.kickstarter.com/projects/1477128197/the-mennonite-game-card-...

He hopes to get the card game in bookstores at the various Mennonite-affiliated institutions, as well as bookstores in heavily populated Mennonite areas.