Myanmar on the Move 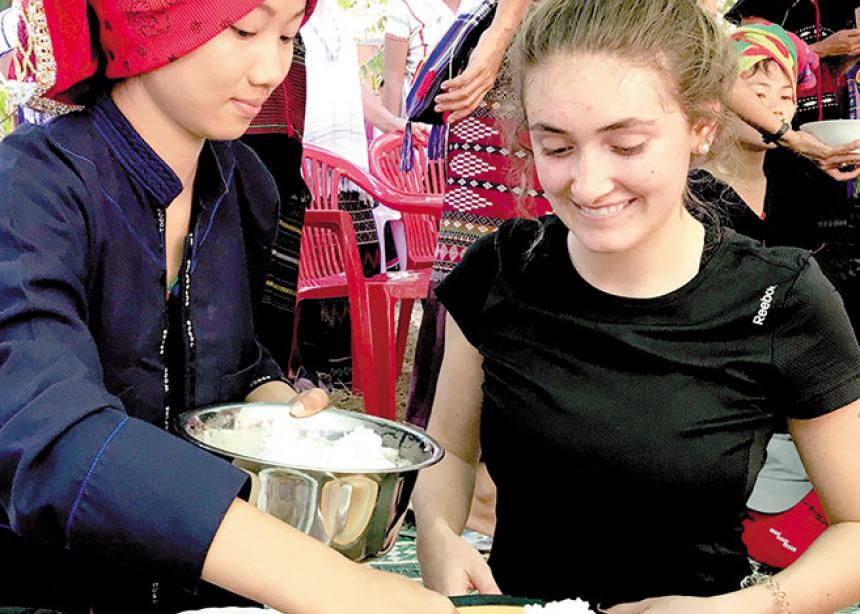 Ashlyn Shantz of Heidelberg, Ont., right, shares a meal together with a local in the village of Win Poat, Myanmar. (Photo by Byron Shantz)

When I originally told friends and family of my intention to travel with my family to Myanmar, I was challenged with the idea of a known global-crisis country as a travel destination. However, we were completely removed from any threat of the Rohingya genocide crisis in the northwest of the country. Our experience was in the south, where Mennonite Economic Development Associates (MEDA) is impressively rooted in creating sustainable solutions to poverty there.

The idea of travelling with MEDA is attractive, deeply fulfilling and safe. MEDA has an ability to draw like-minded donors who are ecstatic to show their involvement and support, in this case for Myanmar on the Move, an initiative to improve the lives of 25,000 women farmers.

We were a multi-generational crew of 20 who really gelled together as we started our days at 5 a.m. before cycling and trekking in 40-degree heat, eating ethnic foods along the way. By midweek, we connected like a travelling hockey team on a road trip.

A big part of this experience was to see this trip through the eyes of my 17-year-old, Ashlyn. If there’s one thing we can offer as parents, it’s the idea of gratitude and giving back.

While conversing on our bikes one day, Pastor David Dyck of Leamington (Ont.) Mennonite Church suggested, “We need to be taken from our own environment and exposed to a new culture, a new way of thinking, to understand more deeply our own roots.” I agree with him. Flying 26 hours to a culture that predates Christianity by 800 years and is immersed in Buddhist philosophy built on compassion, awakened states and karma, is a different place than our environment here in Canada.

Our most robust, arduous and maybe rewarding day was a 700-metre vertical trek to a well-recognized pagoda that was surrounded by 1,200 Buddhas at its mountain base. As we scaled to the peak in extremely warm temperatures, we mused about finding nirvana. Our lighthearted discussions proved to be great conversation as we immersed ourselves in this foreign environment. I really believe understanding one another globally brings more peace to the planet.

Being together in this country, we could start to recognize similarities between our East and West history and faiths. In doing so, I was reminded why I’m so proud of my Mennonite roots. Being surrounded by such a team of outstanding individuals from across Canada and the U.S. was an enriching highlight of this experience.

Cycling the roads alongside marching monks greeting one another with mingalaba (hello in Burmese) will be a memory I’ll never forget. I witnessed such a deep peace in the eyes of so many Burmese people, and their smiles were infectious. They live with such a life of simplicity, something I feel that we can greatly learn from these people.

The village of Win Poat was a magical moment for our group. We were greeted by village dancers dressed in ethnic tribunal garb, accompanied by local hand drummers who shared their ancestral heritage through movement and song. An entire village completely off the grid of any sign of modern technology, but deeply vibrant and rich in community.

We saw a country that is developing in many ways: rich and lush in agriculture; an expanding tourist destination; and warm, expressive people in a land that has almost no crime rate. It’s also a country with many challenges: climate change, farming irrigation and technology issues, ethnic cleansing, an emerging democracy and yet corruption within its government and military. Overall, the desire for advancement seems to be on their side as they move forward with new hope and vision.

Our last evening in Myanmar was cele­brated with a dinner with Canada’s ambassador to Myanmar. It was evident how respected MEDA’s impact is in this country. It’s exciting to see how well this project is performing in Myanmar. It’s even more exciting to know that this is not grant money, but rather loan money, creating ownership and responsibility in the farmers managing their micro-finance loans.

With the money raised by the November cyclists (more than $120,000) and other previous events, MEDA’s Myanmar on the Move initiative exceeded its goal of $600,000 by 10 percent. 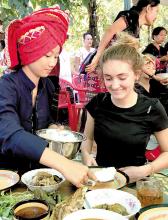 Ashlyn Shantz of Heidelberg, Ont., right, shares a meal together with a local in the village of Win Poat, Myanmar. (Photo by Byron Shantz)

The Myanmar on the Move team stops for a water break and photo. The scenery throughout Kayin State is stunning. (Photo by Dean Shoemaker) 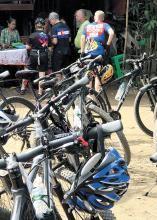 The 20 cyclists on last fall’s Myanmar on the Move fundraising tour stop at a craft village along the way, meeting the artisans who build these products from teak wood. (Photo by Byron Shantz)

Two men at work in one of many rice paddies in Myanmar’s Kayin State that the MEDA group cycled past during its fundraising trip. Farmers and villagers often wave and shout ‘thank you’ even though they have no idea why we are there. The people in Myanmar are extremely friendly and welcoming. (Photo by Dean Shoemaker) 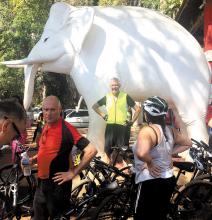 On a cultural stop along the way, Peter Dueck, in the green vest, stands outside the Saddan Cave in front of a white ‘royal elephant’ waiting for the rest of the group to arrive. Inside the cave are dozens of Buddha statues and pagodas. (Photo by Dean Shoemaker) 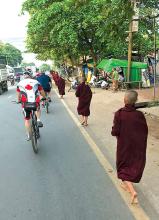 Ken Frey, from the Drayton, Ont., area, in the Canada shirt, and Dean Shoemaker, ahead of him in black, pedal past Buddhist monks during a MEDA-sponsored ‘Myanmar on the move’ fundraising tour last November. Read Byron Shantz’s reflection of the tour and see more photos beginning on page 16. (Photo by Byron Shantz)