From Myanmar to Canada with dreams, gratitude and hope 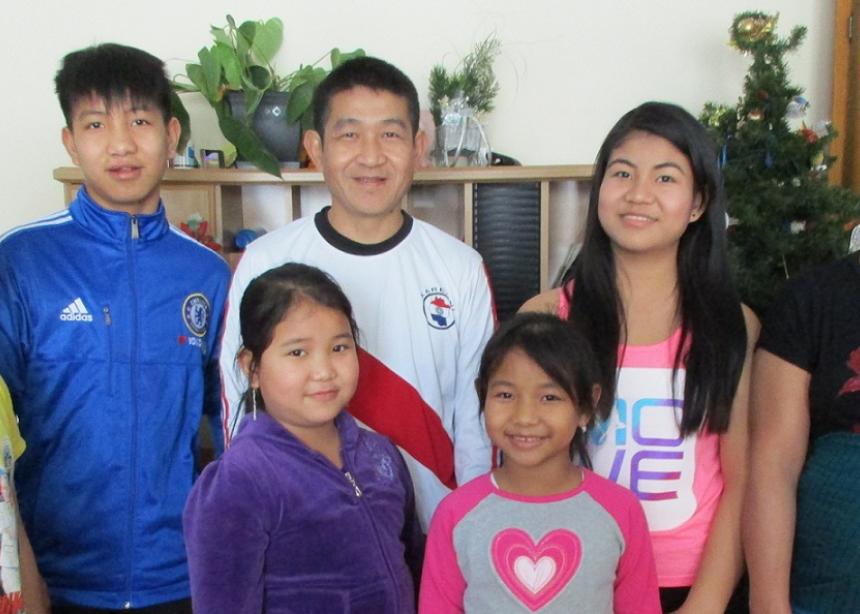 Settled in their new home in New Hamburg, Ont., Lee Reh and Pheh Meh constantly think of family members still in Ban Mai Nai Soi Refugee Camp in Thailand who the couple and their five children left behind when they came to Canada in April 2016. They wish their relatives could join them here and enjoy the safety and good life they have found in Canada.

In the 1990s, the young couple lived among the 70 households in the rural village of Dawkaloekhu in southwest Myanmar. A rice plantation provided work. Vegetable gardens gave them food in addition to rice. But life was primitive. There were no schools or medical services. They suffered the loss of four of five children at birth or early in their lives. Without means of communication, the villagers had little awareness of the conflict raging in their homeland, or the government’s efforts to suppress or destroy the numerous, minority ethnic groups like theirs.

In October 1996, soldiers suddenly arrived and began to burn their village. Villagers fled into the jungle with only what they could quickly grab and carry. Where they roamed or for how long they do not know, since they constantly moved from one hiding place to another. They could only dream of returning to their village and their gardens.

Eventually, some refugee camp residents who risked leaving the camp secretly found the wanderers and brought them to the camp just inside the Thai border. Refugees, most of them Christian, could gather for worship services led by missionaries from outside the camp. But there were no jobs.

Reh and Meh lived in the camp for 20 years, with little hope for the future, although two sons and three daughters who were born to them in the camp survived, giving them great joy.

Nearly two years ago, two of the couple’s camp friends—Tu Reh, his wife Nae Meh and their young son—came to New Hamburg, Ont., sponsored by Trinity Lutheran Church. When Trinity learned that four Wilmot Mennonite churches were considering sponsoring a refugee family, they encouraged them to apply to sponsor the Reh/Mehs despite the hype in Canada to sponsor Syrian refugees.

All four churches—Mannheim, Nith Valley, St. Agatha and Wilmot—agreed and made an application through Mennonite Central Committee Ontario’s Blended Sponsorship Program. The churches raised the necessary funds, volunteers came forward, and a suitable house in New Hamburg was rented and furnished. News arrived in late December 2015 that the family was travel-ready. But they didn’t come. The sponsors waited, paid the rent, shovelled the snow and checked emails. And waited some more.

Finally, the family boarded a plane from Bangkok, Thailand, to Pearson International Airport in Toronto, arriving on April 21, 2016. Several sponsors and an interpreter met them at the airport and brought them to their new home, where they immediately explored every nook and cranny while the children began playing with toys they found. Soon, all enjoyed a meal of familiar foods.

The Reh/Meh family has found a warm welcome in New Hamburg. The children are doing well in school, the parents have attended some English-as-a-second-language classes. The family has been busy with various short-term jobs, soccer, shopping, visiting local attractions, birthday parties, attending worship services and other community events. And they planted a vegetable garden in the backyard.

They have made great strides in many ways, such as paying off their $10,000 travel expenses. When formal sponsorship ends in April, they will face new challenges as they strive to become more independent, something new for them after two decades in the refugee camp.

The family’s smiles express gratitude for the support they have received and the relationships that have developed. They love Canada—except the cold weather—and their new friends. But they still wish that much-loved family members still in the Thai camp can come to share this good life in New Hamburg. Then their gratitude will know no bounds.

Ferne Burkhardt is a member of Mannheim Mennonite Church and the Wilmot Planning Team.

See more stories on welcoming refugees:
‘One night changed everything’
How it feels to give a house away
From refugee to sponsor: A journey of 40 years 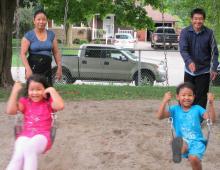