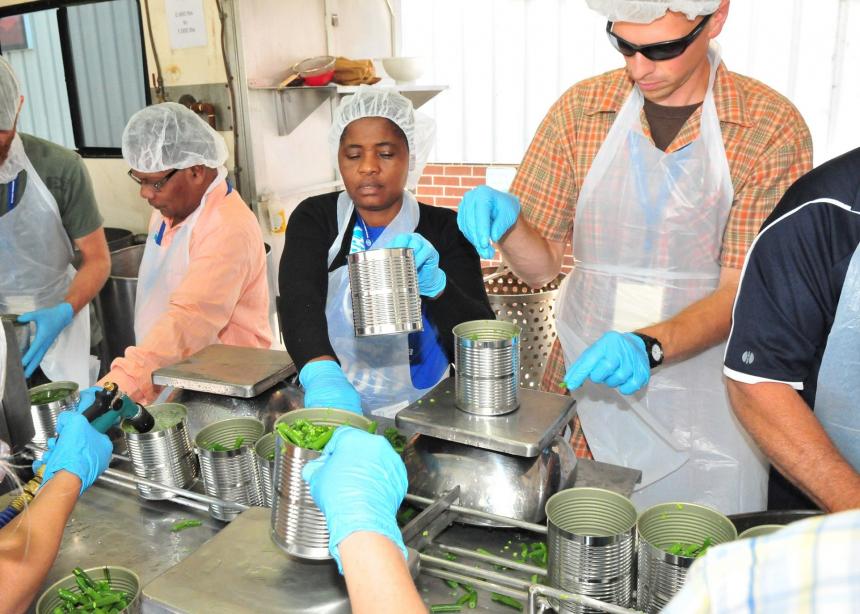 Slipping out a back door into a parking lot, attendees donned hairnets, a few beard nets and plastic gloves to volunteer packing and labeling the 23-ounce cans.

“We knew we couldn’t do meat in a parking lot in July, so this was the only option we had,” said canning coordinator John Hillegass on July 23, part way through the six-day event.

By the end of the assembly, organizers expected that 3,500 cans would be packed into cardboard boxes, destined for food pantries in Pennsylvania. The beans were purchased frozen from a local grocery store, at a discounted rate. Hillegass said it’s the first time MCC has canned anything other than meat.

“I’ve gotten some random calls here and there, people asking about peaches and vegetables,” he said. “But meat is really what we do.”

Serenaded by dozens of swinging hammers at a Mennonite Disaster Service home being partially framed just a few feet away, crews of 10-12 volunteers huddle over a row of empty cans, filling them with frozen beans and water before running through the sealer.

At night, the canner’s year-round crew fires up the trailer to cook the cans. Finished batches are labeled by chatting strangers with glue sticks united in deed and belief.

“We are going to have about 160-plus volunteers,” said Hillegass of the anticipated total involvement. “People just walking by come and say they want to help.”

Tim Huber is associate editor of Mennonite World Review. This article was written for Meetinghouse, a group of Mennonite publications. 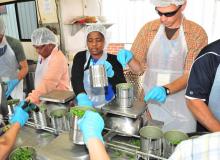