‘A mile in my moccasins’ 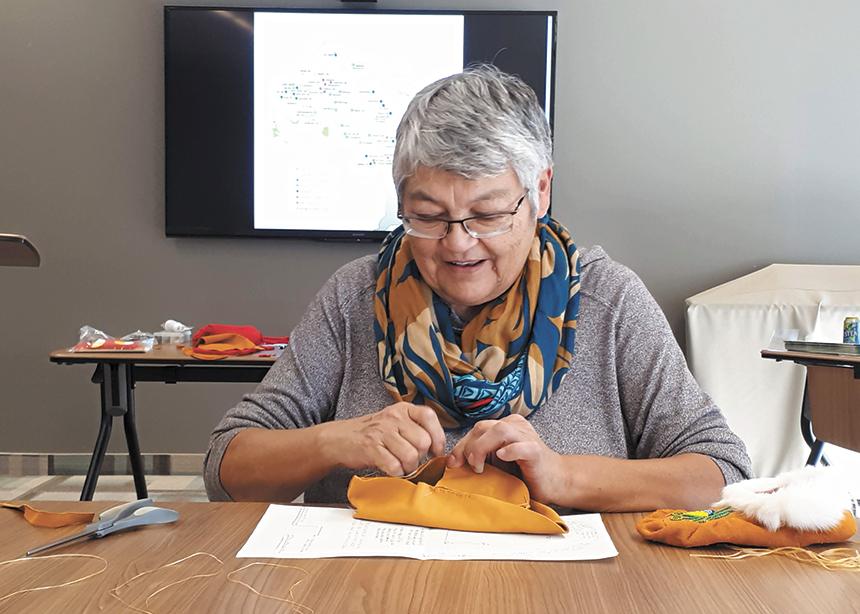 Madelaine Kioke was born in the woods near Attawapiskat, in the James Bay region of northern Ontario, where her parents hunted and trapped. She lived out on the land until she was nine years old, learning to hunt and fish, and set traps and snares with her father. At age six, when her mother first gave her a sewing needle, her love for making moccasins began.

Kioke, a Cree artisan, and great-grandmother, led two moccasin-making workshops in Kitchener, Ont., sponsored by Mennonite Central Committee Ontario’s Indigenous Neighbours program. At the October 18 and 19 event, called “A mile in my moccasins,” some 40 people learned how to make a pair of deerskin moccasins over the two days.

In between patiently explaining and demonstrating the seven steps in the process, Kioke shared stories from her life. She explained how coming “from a family of residential school survivors” means each generation “lost the chance to learn” from the generation before them.

She is motivated to share their story as a way to remember her uncle who ran away from residential school in the spring of 1941, but was found, returned to the school and punished. That summer, when children came back to their home communities, her uncle was not among them. His family never found out what happened to him.

Kioke watched her grandmother go through the pain of losing a child, and her father live with “a legacy of pain” over losing his brother.

Kioke was the second of nine children. Her mother managed everything while her father was out on the trapline. Their staples were Canada goose, fish and moose. Each season, they prepared provisions to sustain them in the next season. “We had everything we needed,” she said.

When her father got sick and was sent to the tuberculosis sanitorium on Moose Factory Island, the local priest decided her mother could not handle all her children alone, so four of them, including Kioke, were taken to a residential school. She lost four brothers to smallpox and polio, common diseases at residential schools.

Kioke chose not to share the details of her own residential school experience. “I’m not going through that again,” she said. “A lot of bad things happened.” She has shared her story previously, in order to preserve it.

As the workshop progressed, participants gained greater appreciation for the time, skill and patience involved in crafting handmade moccasins. It takes about 10 hours to finish a pair, according to Kioke. But before that it takes three or four weeks to tan the hide—soaking, scraping, stretching, drying and smoking it.

Kioke demonstrated the difference between running and rolling stitches, and basting. She encouraged fine, even stitches no bigger than a quarter inch. Step seven was the most difficult and involved, getting pleats spaced evenly while stitching through three layers of hide. It takes a special needle with a very sharp, 3-sided head to sew through hide.

Once they caught onto it, several people noted how hand stitching became meditative. “You can get lost in this,” said Kioke, “and it’s a good lost!” She also makes mukluks, mittens, wrap-arounds and fur hats.

At the end of the five-hour workshop, most people left with one moccasin mostly finished and the instructions for how to complete the other one in the pair—a tangible symbol of the invitation from Kioke to walk “a mile in my moccasins.” 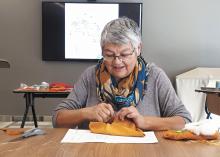 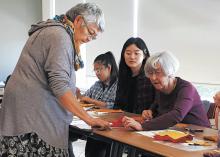