‘They are human beings, as we are.’ 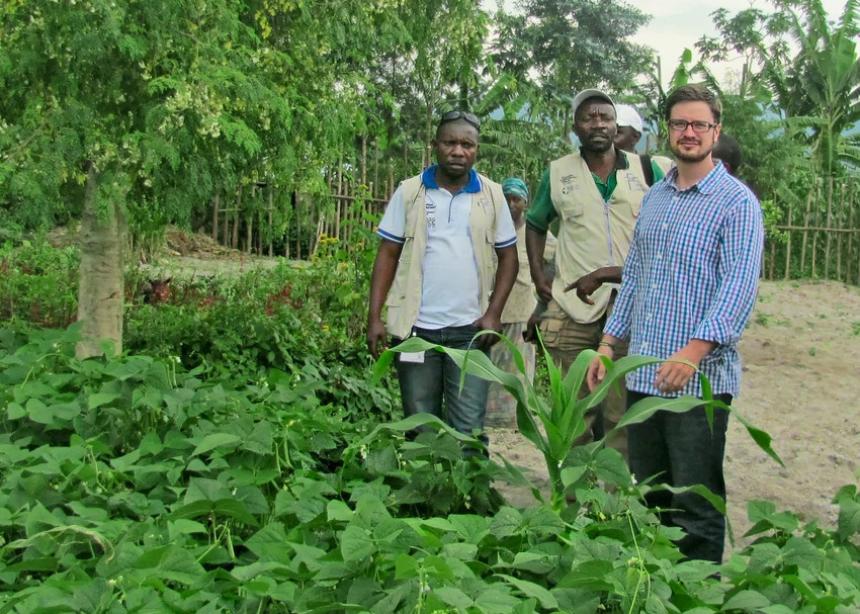 The peacebuilding career of Michael J. Sharp, a former service worker with Mennonite Central Committee, ended when he was kidnapped and killed while on a UN fact-finding mission in Kasai Province, Democratic Republic of Congo.

Four months after Michael J. Sharp moved to the Democratic Republic of the Congo in 2012, he joined a small delegation that for six hours climbed a mountain in South Kivu Province to meet a leader of a major armed group.

The meeting was set up specifically for Sharp, a new Mennonite Central Committee (MCC) service worker, so that he could talk with the colonel about why refugees from the Rwandan genocide had militarized and roamed the forests of eastern DR Congo with their families for 20 years.

This armed group, Democratic Forces for the Liberation of Rwanda (known by its French acronym, FDLR), is known for pillaging and burning villages; raping women; and fighting other militia groups, the Congolese army and United Nations forces. By 2012, the violence caused by FDLR and other armed groups had displaced more than 1.5 million people from their homes in the provinces of North and South Kivu.

Sharp, whose last home in the U.S. was Albuquerque, New Mexico, went to eastern DR Congo to oversee MCC’s humanitarian response to displaced people. Yet as a peacebuilder at heart—having learned about peace at home; in the Mennonite congregations, schools and universities he attended; and in master’s studies in peacekeeping and conflict resolution in Germany—Sharp was keenly interested in stopping the violence that caused the displacement.

The men who traveled with Sharp in 2012 had been working on peacebuilding in eastern DR Congo as staff of MCC’s partner, the Program for Peace and Reconciliation (PPR) of the Church of Christ in Congo (ECC). ECC, a network of Protestant denominations, was able to establish contact with armed groups because pastors who served in remote areas knew militants who attended their churches or lived nearby.

Serge Lungele, then a PPR program officer and now co-facilitator of MCC’s Seed program in DR Congo, and the Rev. Josué Bulambo, coordinator of PPR, remember that day’s meeting. Lungele, who became close friends with Sharp in the three years they worked together, recounted how the conversation began.

“Have you ever met an FDLR before?” the colonel asked.

“What do you see? Are they human beings or are they animals?"

“I see they are human beings, as we are.”

“This is the message I would like you to transmit to the U.S. and the international community—that FDLR, even if they are living in the bush, they are still human beings and they still need the right to live like other people are living.”

The colonel’s message about the value of each person fit into Sharp’s own belief system.

“He [Sharp] had a very deep and primary commitment to the idea that if you approach other people as human beings, you can work through differences and that reconciliation is possible and desirable,” said Tim Lind, who was MCC’s representative in DR Congo with his wife, Suzanne Lind, during Sharp’s term of service.

Sharp’s respect for every person he encountered was evident, said Suzanne Lind. “He was so compassionate about people at a level that was deeper than most of us because he didn’t protect himself; he just jumped right in there,” she said.

In the Mubimbi and Shasha camps for displaced people, Sharp worked as a technical advisor with staff of ECC’s humanitarian program. Together they oversaw a large food distribution and agricultural development response through MCC’s account at the Canadian Foodgrains Bank and additional MCC-sponsored food projects.

As Sharp interacted with people in the camps, he was especially drawn to the children, said Fidèle Kyanza, a provincial director of ECC’s North Kivu humanitarian program.

“He used to joke and play with the children. He talked to them in French. He helped them with math,” Kyanza said.

Sharp believed strongly in the value of MCC’s educational assistance for all the children in the camps, Kyanza said. Since 2009, MCC has paid school fees at local schools for every primary student from the camps and provided school supplies to them and to community students.

With the Linds’ blessing, Sharp expanded his assignment so that he could work with PPR’s repatriation and disarmament initiatives.

PPR leaders believed that a lot of violence in eastern Congo would stop if FDLR fighters would lay down their weapons and be voluntarily repatriated to their home country of Rwanda. They and their families could leave their destitute lives in DR Congo and become civilians at home, where the Rwandan government promised to allow them to live freely.

“The idea that you help the enemy find what is best for them and facilitate a move toward normal life was quite new, and it grabbed him,” Suzanne Lind said.

With Sharp’s experience in peacebuilding and conflict resolution, he was the team member PPR needed as it approached FDLR leaders to get agreement to this plan.

Sharp’s background and inclination to push into new initiatives were part of what motivated him to work with PPR, Tim Lind said, but he also had deep respect for PPR colleagues, including leaders and animateurs, specially trained pastors who went into the bush to explain repatriation, sometimes at great personal risk.

From 2008 to 2016, PPR helped to repatriate more than 1,600 combatants and 23,000 civilians and helped facilitate four public disarmament ceremonies of FDLR fighters.

Bulambo said Sharp took every chance he could to advocate for the peaceful work of PPR, including with delegations from the U.S. and Europe who came to learn about DR Congo.

“It was very important for us to have someone who could make the bridge between the West and Congo,” Bulambo said. “Michael was like that witness who was witnessing what we were facing. After he had the information from the fields, he could advocate with the U.S. and everywhere.”

Sharp believed that only God could make the work possible, Bulambo said.

“Michael was always reminding us to pray. Whenever we met with him, we always started with prayer, for our trips, the animateurs. We were also praying that God would touch the heart of the people in the bush so they could receive our message. Whenever he went to advocate, he asked us to pray as well so his message could be understood.”

Sharp completed his MCC assignment and joined the United Nations in 2015. But he kept in contact with friends in PPR and MCC, even up until March 12, 2017, when he was kidnapped. He was found dead on March 27, along with UN colleague Zaida Catalan. Four team members who travelled with them remain missing.

Mennonite Central Committee has set up the Michael J. Sharp Memorial Fund for peacebuilding work in DR Congo. You can donate here.

Linda Espenshade is the news coordinator for MCC U.S. 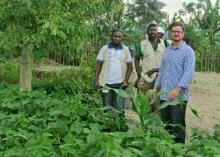 At Shasha camp, one of the places where people lived after being displaced by violence in eastern Democratic Republic of the Congo, Michael J. Sharp, left, and hosts from the camp and his colleagues from the Church of Christ in Congo, listen to Patrick Maxwell, right, who was an MCC service worker from 2013 to 2016. MCC carried out Canadian Foodgrains Bank food distributions and agriculture programs there and paid school fees for children living at the camp. (MCC photo by Patricia Kisare)