MEDA sets a record as donors give $6.5 million 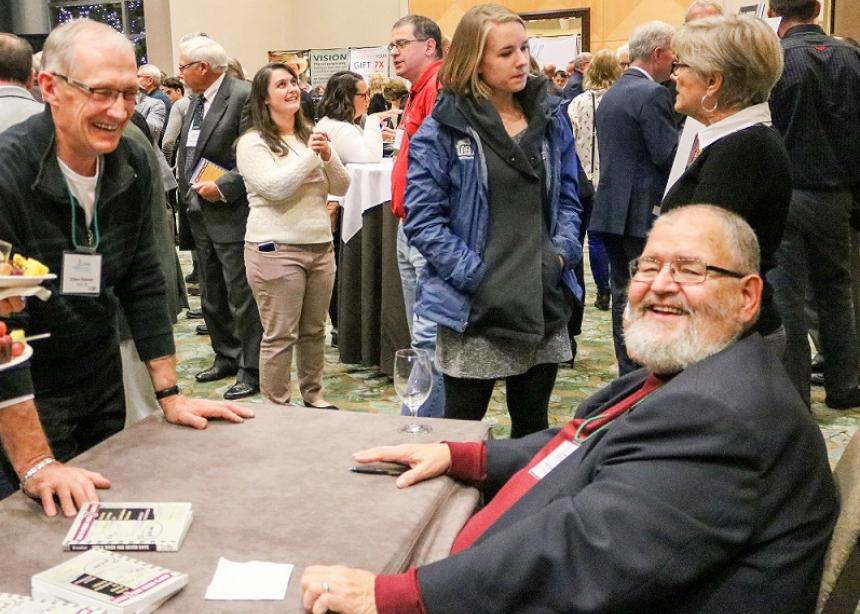 Matched by grants from governments and other institutional funders, those gifts allowed MEDA to help 91 million families in 60 countries “realize happier, more economically sustainable lives” through its work with 322 partners around the world, he told hundreds of supporters from across North America.

MEDA has signed over $200 million of contracts in the past few years to build enduring livelihoods through investments, training and helping farmers and others to find markets for their production. Recently signed agreements include work with youth and women in northern Nigeria, expanded programs in Pakistan and Myanmar, further work to commercialize cassava seed stock in Tanzania, and testing models for the trade finance needs of small and medium-sized businesses.

Funding from the Canadian and U.S. governments often matches funds raised by $5 to $7 for every dollar provided by MEDA donors. The Bill and Melinda Gates Foundation provides a 17-to-1 match for a Tanzanian cassava project.

MEDA has launched a $50 million Building Enduring Livelihoods campaign to raise funds needed for these projects. To date, $27.8 million has been pledged over the next five years, campaign chair Rob Schlegel reported.

Peace by Chocolate
Highlights included a panel discussion and seminar presentations highlighting the plight of displaced persons around the world. Tareq Hadhad was studying medicine in Damascus, Syria when his family’s chocolate factory was bombed in 2013 and they were forced to flee to Lebanon.

Last year, after arriving in Canada as refugees, his family started making chocolate again. They formed a company called Peace by Chocolate in the small rural community of Antigonish, N.S. Peace by Chocolate became an international media sensation after Canada’s Prime Minister mentioned it at the United Nations. The company has signed a deal to have its product distributed nationwide by Sobeys, Canada’s second-largest grocery chain. It plans to hire 25 to 30 new employees, a major boost to an area where employment is hard to find.

Tareq Hadhad works at the family’s factory, travels to tell the Peace by Chocolate story, and takes university courses online so he can eventually practice medicine.

Dr. Samantha Nutt, founder of War Child Canada and War Child USA, blasted the fact that investment in war is 12 times larger than the amount of money put towards aid and development. “It’s time to address that imbalance,” she said.

Nutt encouraged her audience to educate themselves by watching international news every day, lobbying pension funds to divest from arms manufacturers, and to make ongoing, monthly donations to charities working to create justice and provide economic opportunity.

Tina Campbell of ASSETS, a Lancaster, Pa. group that provides job training, encouraged her audience to embrace “business as unusual” by supporting restaurants that pay living wages and give jobs to refugees or people with barriers to employment. Twice as much money is spent in restaurants each year as is donated to charities, she noted. 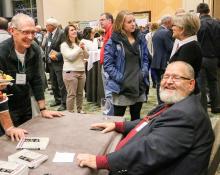 At the 2017 MEDA annual convention, Rob Schlegel describes the progress of MEDA’s $50 million Bridges to Enduring Livelihood campaign as MEDA president All Sauder looks on. (MEDA photo by Steve Sugrim)