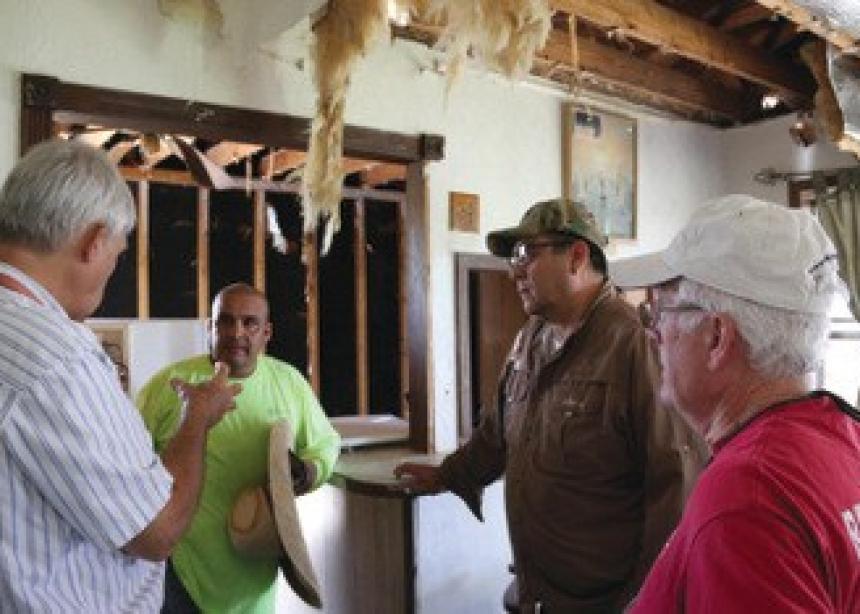 The Mennonite Disaster Service (MDS) assessment team moved deeper into the devastating footprint of Hurricane Harvey on August 31, 2017, as they visited the town of Bloomington, Texas, southwest of Houston in Victoria County, U.S.A.

The impact of Harvey suddenly became more intense for the team as the damage was evident “block after block” in the town, according to MDS executive director Kevin King, who is leading the assessment team. “There is hardly anyone here right now, but of those who are, some are sleeping outside on sofas under tarps.”

County emergency operations officials reported that between 500 and 600 homes are damaged and in need of everything from stringing tarps across the roofs to removal of debris and gutting the homes.

Already an economically stressed community, Bloomington and Victoria County took the full force of Harvey’s wind in late August, as it moved north towards Houston, where it dumped trillions of gallons of rain water, causing catastrophic flooding.

“There is plenty of need in this community,” Danny Garcia, county commissioner for Victoria County told the assessment team during a meeting at the county’s emergency operations center.

Garcia described how the west side of the community was poor and said he was concerned they might get lost in the shuffle as disaster response groups gear up to begin the mammoth task of cleaning up after Harvey.

“I’m here because this is where my heart is at,” Victoria County volunteer coordinator, Linda May, said. “For the people that can’t help themselves, I just want to give them hope.”

Hope might be in short supply for the moment, as the enormity of the situation reveals itself in the Bloomington and the region at large. Tens of thousands of people were evacuated in the region and continue to wait to return to their homes, schools, jobs and communities.

The Victoria county officials have now asked MDS to begin assisting them with the cleanup in Bloomington.

“We’re ordering in teams,” King said.  “The number one priority is tarping roofs to protect the homes from more damage. The wind damage was tremendous.”

“Second will be cleanup of debris around the houses for sanitary reasons,” he said. King said that, once the debris is curbside, Federal Emergency Management Agency (FEMA) contractors will collect and dispose of the debris.

“Third, we will start gutting houses, there is a lot of mucking out to do,” he said.

King said MDS cleanup crews will arrive in Bloomington as early as Sept. 2. Volunteers from Nebraska will bring a track loader and mini-excavator for picking up debris.

King figures the cleanup effort could take two to three weeks or more.