The desire to ‘make it up north’ 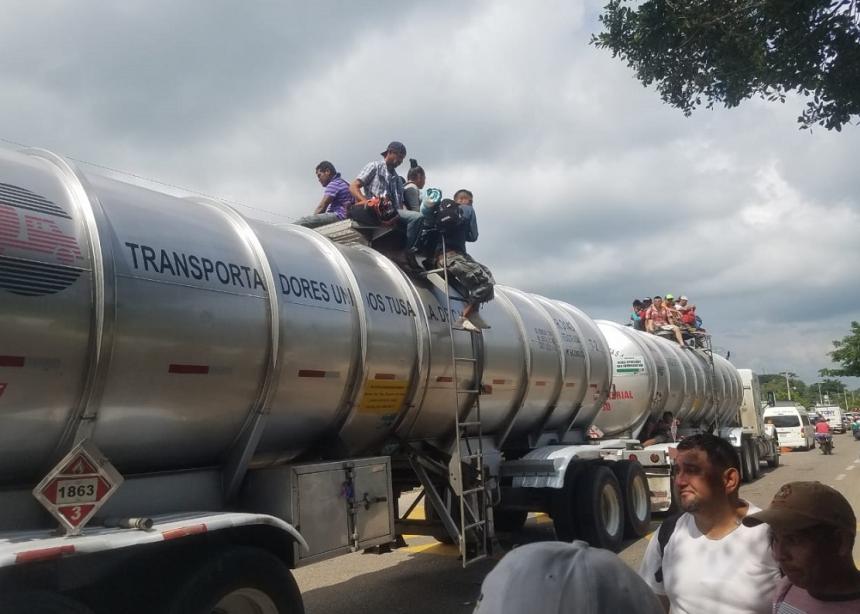 Daniel (a pseudonym) took this photo as members of the caravan he is with in Mexico climb aboard big trucks that will carry them north for a while. (Photo courtesy of Daniel)

Daniel (a pseudonym, for security reasons) doesn’t have just one reason for leaving his daughter, 8, and parents in Honduras. He has many reasons for joining a caravan of thousands of migrants walking toward the U.S. border with Mexico.

“I was forced to leave because there weren’t jobs or opportunities, plus the insecurity and violence. It was a little bit of everything,” he says.

“The gangs,” he adds to the list. “Where I’m from there are gangs, and it’s really pretty dangerous there. That was a factor, too.”

Daniel’s hometown also is threatened by a mining company whose work has poisoned the town’s water, explains Lars Åkerson, who is the connecting peoples coordinator for Mennonite Central Committee (MCC) in Honduras. Children who bathe in the water get rashes, and vocal residents who have opposed the company now have warrants out for their arrest.

Daniel decided to travel with a caravan because it offers him more security, food and protection than he would have if he were travelling alone. He has tried to reach the U.S. southern border twice before, but he was detained in Mexico and returned home both times.

He is motivated to keep trying to reach the U.S., he says, not just because of the difficulties where he lives, but by what he is hoping for: to provide financially for his parents and daughter.

According to Aldo Ledón, director of Mesoamerican Voices, an MCC partner in Mexico, Daniel's situation is one of the better ones. For many, he says, “It’s not about seeking better conditions. It’s about being able to remain alive. They say, ‘We are going to die at home if we do nothing, so better to die trying.’”

MCC supports Mesoamerican Voices’ efforts to protect the human rights of migrants, including children and youth, while they are kept in a Mexican detention centre. It is now coordinating volunteers from San Cristobal, Mexico, to walk with people in caravans.

The volunteers’ presence helps to diminish the chance of violence from authorities or organized crime in the area, Ledón says. People in the caravans also benefit as volunteers listen to them, advise them about safe routes and pay extra attention to those who lag behind.

At House of Migrants, an MCC partner in Guatemala City, Guatemala, MCC contributed blankets and hygiene kits to some people who were part of a recent caravan and to other migrants earlier in 2018. And at the Mexico-U.S. border, other MCC partners offer hospitality and job training for people who choose to stay in Mexico.

Migration is a universal right, says Abby Hershberger, a program assistant at MCC’s United Nations Office, explaining one of the reasons why MCC offers support to migrants. The right to request asylum also is enshrined in U.S. law, says Tammy Alexander, senior legislative associate for domestic affairs with the MCC U.S. Washington Office.

“Barbed wire and border walls won’t stop people fleeing poverty and violence,” Alexander says. “If we want to reduce the number of asylum seekers coming to the U.S., we should invest, instead, in programs that help people stay in their home communities.”

That is why most of MCC’s work in Central America is focussed on addressing the root causes of violence and poverty that motivate families to flee their home countries.

Daniel says he expects to enter the U.S. without official permission. He recognizes that it violates U.S. law to do this—a misdemeanor for a first crossing—but he sees it as a necessary step he must take for his family.

“We just want to get there, work and make a little money before we return to our country,” he says. “It’s not that we want to spend our whole lives in North America. We know that [the U.S.] is a country with lots of employment opportunities.”

Daniel says that God has been his companion on the way through Mexico: “I have seen God's hand over me and over many of the other immigrants, protecting them and keeping them from harm, from any harms along the way: thieves, accidents, violence. Thanks to him I am here, and trusting in him, we’ll make it up north.” 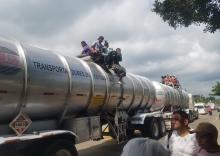 Daniel (a pseudonym) took this photo as members of the caravan he is with in Mexico climb aboard big trucks that will carry them north for a while. (Photo courtesy of Daniel)

This asylum seeker, unnamed for his protection, takes the bus from Casa Alitas, a respite house in Tucson, Ariz., to his next destination. The vast majority of asylum seekers from Central America have family in the United States with whom they plan to stay while awaiting a decision from immigration courts. (Thomas Nilsson photo: thomasnilsson@mac.com) 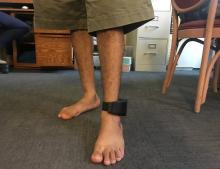 An asylum seeker at Casa Alitas, a respite house in Tucson, Ariz., shows his ankle-tracking monitor put on by an Immigration and Customs Enforcement agent at the Nogales, Ariz., port of entry. (MCC photo by Katherine Smith)

MCC East Coast funds the work of Rachel Díaz, left, a consulting attorney who helps immigrants attending Anabaptist churches in the U.S. to know their rights and get the legal status they are seeking. She is pictured with clients Maria Lopez Solis and Genry Rivas and their son Daniel Andre Rivas Lopez. (MCC photo by Andrew Bodden)

A mural at Centro de Atención a Migrantes en Éxodo (Center for Attention to Migrants in Exodus), a migrant shelter for families and individuals in transit, depicts Jesus riding on top of ‘La bestia’ (‘the beast’) with migrants who ride the train to the north. (MCC photo by Laura Pauls)

María Socorro Pineda, centre, stands with her daughter Evelin Briggith Lopez Pineda, 17, and son Herson Alfredo Pineda, 13, at their house. The family left with a migrant caravan in October but were forced by illness to come back home. (MCC photo by Jill Steinmetz)

When Magdalena Marcos Perez of Guatemala learned to diversify the produce in her garden through an MCC-supported project, she began to make more money. She used to consider migrating to the U.S. (MCC photo by Matthew Lester)