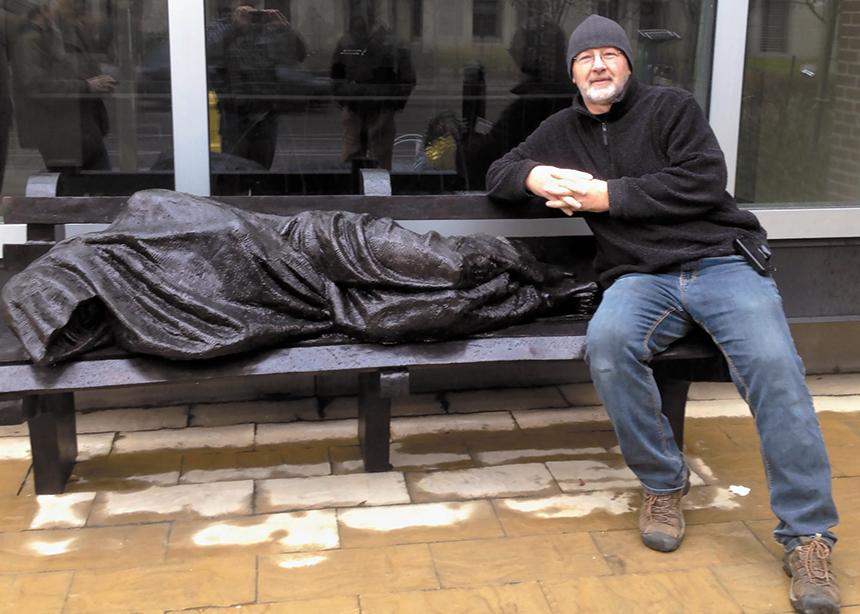 In 2013, the first cast of Canadian sculptor Timothy Schmalz’s “Homeless Jesus” was installed. The bronze statue, which depicts the Christ figure as a person sleeping on a park bench, was offered to two churches before being installed at Regis College at the University of Toronto.

When Pete Olsen, coordinator of the Mennonite Central Committee (MCC) Toronto Ontario Opportunity for Learning and Service (TOOLS) program, takes groups completing the program to see the statue, he says they talk about the image of Jesus that it presents. What one thinks of the statue, he says, is “really critical to who you think Jesus is.”

Jesus identified with homeless people, Olsen says, quoting from the gospels: “Foxes have dens and birds have nests, but the Son of Man has no place to lay his head” (Matthew 8:20). “He said, ‘When you do this for them, you do it for me,’ ” says Olsen, adding, “What more motivation do we need?”

Olsen, 64, has been running TOOLS for the past seven-and-a-half years. Building on years of working with youth and with inner-city mission, he revamped the program to focus less on theoretical, classroom learning and more on practical experience. The concept is less in the vein of a short-term mission trip and more like an MCC learning tour translated to the urban environment.

Over the course of a weekend, teams of young people, usually youth or high school groups or young adults, come to the city to experience what homelessness looks like and what organizations are doing to help.

The typical schedule includes a prayer walk covering downtown Toronto, volunteer opportunities with local shelters and soup kitchens, and a guided street walk with speaker Patrick Sullivan, who shares his own story of homelessness as a teen. Groups also participate in experiential activities, like breaking into small groups to meet and talk with homeless people, or to explore Toronto through the eyes of someone who doesn’t have housing, trying to imagine where one would sleep, get money, find entertainment or food.

“It’s like a practicum in homelessness,” says Olsen. “As I say at the end, you’re leaving the city, and you didn’t make a difference. But we hope that Toronto made a difference in you.”

Olsen, who currently works 0.4 time on the TOOLS program, is beginning a transition into retirement. A new hire, a former youth pastor hired after an exceptionally busy spring, will take over for Olsen by October 2020.

Olsen says he loves seeing young people fired up about issues of poverty, and the new skills they cultivate during the program. He is especially gratified to see young people learning to talk with people who are panhandling on the street and connect with them on a human level.

The job is one that can be “super fulfilling,” when he sees how excited groups become about alleviating poverty, Olsen says, but, at the same time, it can be heartbreaking to witness so closely the hardships of homelessness. When he hears friends or acquaintances talking about homeless people as a problem or a nuisance, the “justice warrior” in him comes out, he says. “You’re talking about people who are homeless; I’m talking about Joe or Heather, people who have a story.”

There are many misconceptions that people bring to the issue, he says. For one, Olsen maintains that providing housing for everyone in the country would be cheaper than funding the services that become more overstretched as homelessness becomes more pronounced—from policing and court costs, to jail and health care.

Other misinformation, like the idea that panhandlers are secretly rich, can allow people an excuse not to engage. “We can easily come up with excuses not to help people,” says Olsen, “but we have to step past our own selfish humanity and remember what Jesus did.”

To do better, Olsen says Christians need to care. It was hard for him to realize that within all the teams of people that came from churches, very few had ever spoken with a homeless person before. “I ache to see the body of Christ engaged,” he says.

A good first step is to begin engaging with people face-to-face, he says. “Take a moment and say ‘hello.’  ” He suggests packing some items to give out: a toothbrush, toothpaste, gift cards, small bills, socks, or soft edible items like fruit or candy. “Exchange names, shake their hand. Let them know that they’re not invisible. Let them know that you see them.”

Olsen also recommends that people connect with agencies that work with homelessness in their area. “Keep it simple,” he says. “Don’t go and [try to] save the world. Look after one or two people. There [are] enough people in our pews to make a significant difference. We need to get Mennonite about this!”

For more information about the TOOLS program, visit mcctools.net.

This article appears in the Sept. 30, 2019 print issue, with the headline, "A practicum in homelessness." 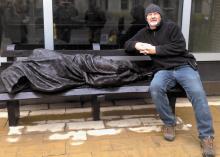 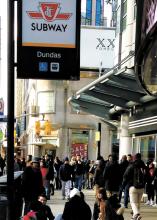 A group of TOOLS participants talk with a homeless person at Yonge Dundas Square in downtown Toronto. (Photo courtesy of Pete Olsen)