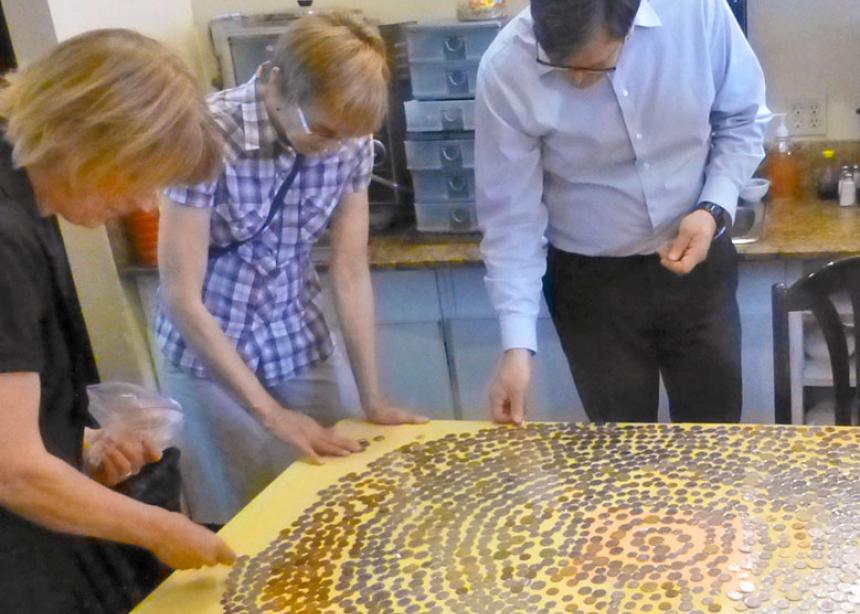 <p>MCC Alberta supporters add pocket change to a growing spiral, netting more than $550 to go toward paying the costs of the annual Relief Sale held in Didsbury on June 5 and 6. (Photo by Gordon Baergen)</p>

These words came from Gordon Baergen, a member of Holyrood Mennonite Church in Edmonton who helped to organize a May 21 pre-sale fundraiser in preparation for Mennonite Central Committee (MCC) Alberta’s annual Relief Sale held in Didsbury on June 5 and 6.

Jodi Tse, a member of the Edmonton Christian Life Community Church, was the idea person and a main organizer for the fundraiser. She booked the Chinese Dynasty Century Palace Restaurant so donors could enjoy a great meal as the featured evening entertainment. More than 180 people paid for tickets to cover the cost of the meal.

A silent auction, highlighted by five dozen zwieback buns selling for a combined total of $710, and generous donations rounded out the record-setting total.

A “change” table was also a big hit. Starting with one coin in the centre of the table, donors were encouraged to add change in an outwardly spiralling pattern. A second table was set up part way through the event to keep up with pocket change donations totalling more than $550.

A small music group’s contributions to the event were largely drowned out by the restaurant crowd, but Baergen said the singing of “We’re Marching to Zion” was an excellent, unifying way to end the evening. “It was like a huge choir,” he said. 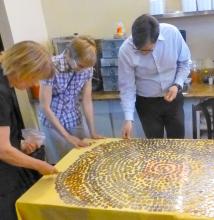 MCC Alberta supporters add pocket change to a growing spiral, netting more than $550 to go toward paying the costs of the annual Relief Sale held in Didsbury on June 5 and 6. (Photo by Gordon Baergen)