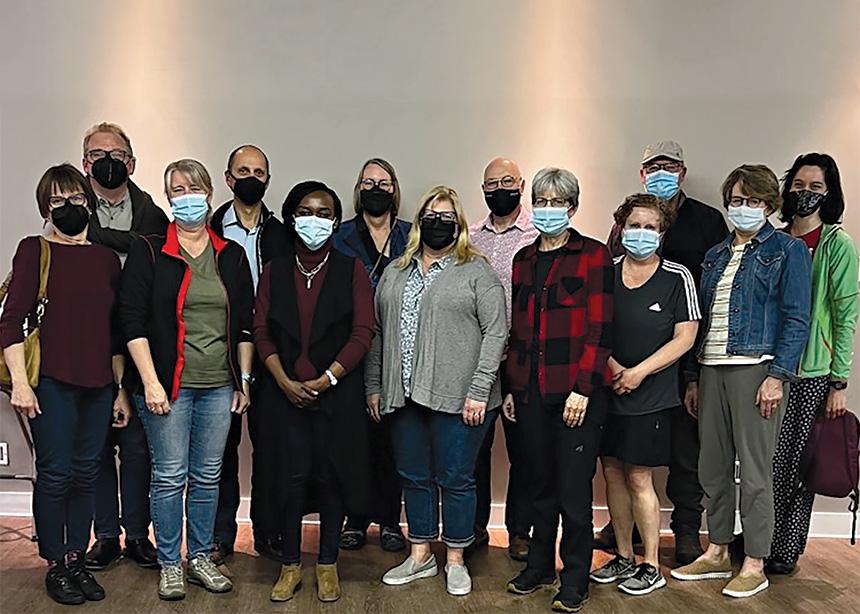 Jackie Karau (third from the left, front row) recently presented an information session on refugee sponsorship to a group from Foothills Mennonite Church, in Calgary. (Photo by Orlando Vasquez)

“I have learned that there is an overwhelming amount of need and suffering in this world. It is not up to us to solve every problem out there, but we can start by helping one person,” says Jackie Karau, the migration and settlement program associate for Mennonite Central Committee (MCC) Alberta. She has experience in settlement work with Calgary agencies serving immigrants and has expansive knowledge in this area. Part of her role is to provide orientation on refugee sponsorship to interested congregations.

MCC Alberta works to promote and support sponsorship through churches, provide information and advocate for fair legislation. There are over 70.8 million people displaced worldwide, who became refugees when they were forced to flee their homes due to conflict or violence. MCC has been helping refugees settle in Canada through sponsorship programs since 1979.

“The moment the news cycle changes, we forget that there are so many people who need to be resettled,” says Karau of the many refugees who have been screened, reviewed, and are ready for resettlement. These “forgotten people” need the support of churches and the community.

MCC’s orientation provides insights into what settlement looks like, including church obligations and commitments, challenges, how to find resources and networks in the community, and balancing the need to help with dependence.

“Resettled refugees, now newcomers to Canada, face many challenges,” says Karau. Some of their lived experiences contribute to these challenges—the reasons they fled, how they fled, what that journey looked like, if they experienced violence or witnessed it, if they lost family etc.”

Sponsors can be a church congregation, a community group, or collection of people who have the time and resources to help. The sponsoring group helps the refugee family with practical things like housing, finances, and grocery shopping, as well as offering friendship and emotional support. While sponsorship is a one-year commitment, the relationships that are built often last longer.

“Arriving in a safe place doesn’t mean that psychologically you stop running, and that’s why settlement is not a one-year linear process. It takes time and cannot be measured by the same metrics we use to measure independence and success in a typical Canadian context,” she says.

Karau promotes refugee sponsorship under either the Blended Visa Office-Referred Program (BVOR) or the Joint Assistance Program (JAS). The BVOR Program gives Canadian citizens and permanent residents a chance to help refugees in need of resettlement by partnering with the government. Refugees are identified by a referral organization, such the United Nations refugee agency (UNHCR), and private sponsors commit to providing six months of financial support and 12 months of social, emotional and settlement support. The Canadian government provides the other six months of financial support.

Refugee candidates through this program (BVOR) are in a pool, therefore if churches are willing and able to commit, MCC will select a profile to match a family with a congregation.

“They have no one abroad advocating for them; they are there hoping that someone picks their name,” says Karau. She points out that sponsors are not helping only one family but all the descendants of that family.

In the Joint Assistance Program (JAS), the government of Canada sometimes partners with organizations to resettle refugees with special needs, who need more support. Under the JAS, the government and the private sponsor support refugees for up to 24 months or even 36 months, depending on the case.

“It takes a while for individuals to get out of survival mode, but they realize that you are there to support them while they settle and begin to plan for their future,” says Karau. Success to some refugees might be the ability to sleep through the night or overcoming the fear of other people enough to sign up for English classes. She continues, “That said, it is the resilience that is built on that journey here that enables many such families to thrive in Canada and build beautiful lives and legacies.”

MCC can provide information for congregations or groups interested in knowing more about resettlement. 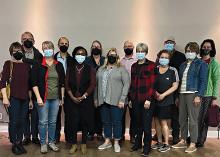 Jackie Karau (third from the left, front row) recently presented an information session on refugee sponsorship to a group from Foothills Mennonite Church, in Calgary. (Photo by Orlando Vasquez)