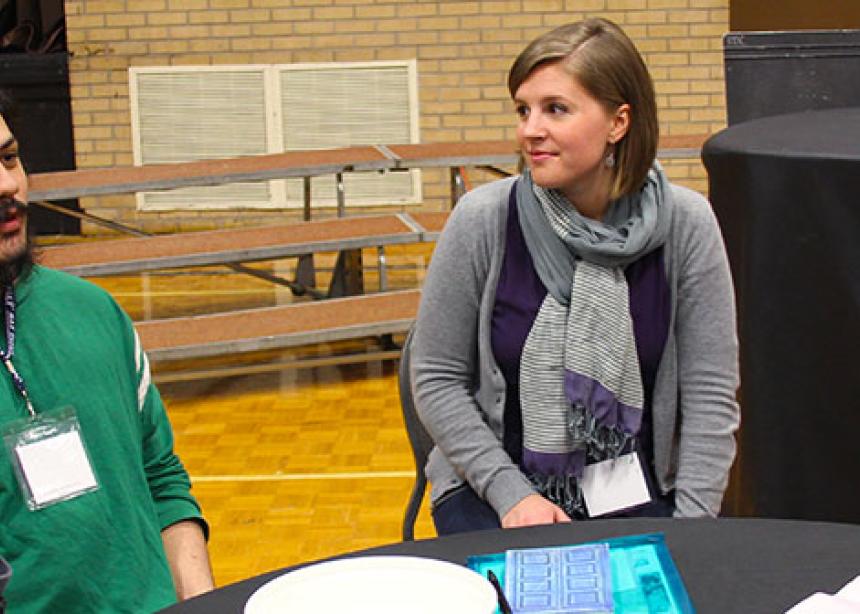 <p>Chris Brnjas, left, Dimitri Faludy, Rachel Brnjas and Esther Kissor talk about their work at the 2015 Mennonite Church Eastern Canada annual church gathering. The Brnjases work in churches in Kitchener, Ont., and attend The Gathering Church. Faludy and Kissor are from the Jane Finch Faith Community in Toronto. (Photo by Dave Rogalsky)</p>

Paul Wideman, moderator of Mennonite Church Eastern Canada, challenged the 28th annual church gathering, saying, “How can we encourage one another by sharing our faith?” The day-and-a-half event was filled with faith stories and had little actual business. Advertised as such, the gathering at Rockway Mennonite Collegiate in Kitchener on April 24 and 25 was fully subscribed with some watching the live streaming from home.

David Martin, executive minister, started off the sharing on April 24. He said that while studying at Conrad Grebel University College he slipped into a clinical depression and became suicidal as his “naïve faith” was challenged by what he was learning in Bible and theology classes. But like an unseen hand holding him up, he experienced the “miracle” of God rebuilding his sense of self, and his faith, putting him back together. His experience and intellect were brought together as he “descended with the mind into the heart.” He admitted that as a church leader even his winter recreation with a pastors curling league is within circles of faith. Where are his opportunities to share his faith? (See David tell his story here.)

The first night’s sharing was rounded out with Fanosie Legesse, an Ethiopian-born member of Bethel Mennonite Church near Elora, saying that sharing one’s faith means submerging one’s own goals and ego in God’s desires. (See Fanosie tell his story here.)

Instead of reporting on April 25, staff allowed their written reports to stand and shared their own faith stories instead.

Henry Paetkau, area church minister, noted that his faith in action, including church attendance, is simply part of who he is. He believes that there is good in the world he would not sense without a belief in God. (See Henry tell his story here.)

Brent Charette, church engagement minister, spoke of Emmaus Road experiences of meeting Jesus when he pays attention to the people he is with.

Ester Neufeldt, operations minister, told the story of a faith developed through her parents’ habits of faithfulness, habits that she believes “enable each other to follow Jesus Christ, a good habit to have.” (See Ester tell her story here.)

Brian Bauman, mission minister, has found that in sharing faith with others he needs to be silent, that God is already having a conversation with a person before he comes on the scene. (See Brian tell his story here.)

Jeff Steckley, congregational ministries, noted that God is mystery, but “mystery is not unknown, but that which is infinitely understandable.” (See Jeff tell his story here.)

Others who told their stories were Joanna Loepp Thiessen, a “preacher’s kid” who had to find her own faith; Tim Wagler’s story of getting spiritual advice from a former street person; Maciel Arias Hernandez from the Toronto Mennonite New Life Church, a Hispanic gathering;  Joel Warkentin, a teacher at the UMEI Christian High School in Leamington; Bernard Sejour, an MC Eastern Canada staff person catalyzing church planting in Ottawa; and Catherine Gitzel, a pastor at The Gathering Church in Kitchener.

Twice the gathering was broken into with difficult stories. Rick Cober Bauman, executive director of Mennonite Central Committee (MCC) Ontario, spoke about the 7.8 magnitude earthquake that ravaged Kathmandu, Nepal, that morning, reporting that all MCC staff, including Leah and Luke Reesor Keller from Erb St. Mennonite Church in Waterloo, were safe.

In the afternoon, an open mike time was cancelled to allow for prayer for the Jane Finch Faith Community Church that meets in a 25-storey building in Toronto. A fire on the fourth floor where some church attenders live was filling the building with smoke. The stage was covered with folk praying for community members.

Business included accepting the Chin Christian Church in Kitchener into full membership; correcting a 27-year-old clerical error that meant the Toronto Mennonite New Life Church had never had its full membership acknowledged; and a celebration of Ester Neufeldt’s 27 years of ministry coming to an end in June.

Delegates accepted a balanced 2014-15 financial statement, and a slightly smaller balanced 2015-16 budget. These balanced budgets were made possible by transfers from reserve funds which grow from bequests to MC Eastern Canada. For the next year these transfers total over $300,000, or about 15 percent of the total. Such budgets were acknowledged not to be sustainable in the long run. The sale of MC Eastern Canada’s old buildings on King Street East in Kitchener closed on the day of the gathering. It was also reported that the boards of the area church and the Warden Woods Community Centre were meeting regularly and expected a non-litigated solution to the ownership of the building which houses the Centre and used to be the home of a Mennonite congregation. A new church plant may be part of the solution to this conflict.

The Legacy Initiative Fund, based on a large bequest from Enid and Harold Schmidt, continues to fund new programming. Included are a program to help congregations make disciples more effectively, plans for church planters in under-resourced urban areas, and a new Anabaptist learning workshop, developed with Conrad Grebel University College, for new Canadian leaders and congregations, people without higher education or with lower English language proficiency.

MC Canada’s Future Directions Task Force report took up 45 minutes of reporting and discussion. While not a decision-making time, reporting from table groups seemed to favour decentralization of the national church.

You can view videos of the faith stories on the MCEC website.

Chris Brnjas, left, Dimitri Faludy, Rachel Brnjas and Esther Kissor talk about their work at the 2015 Mennonite Church Eastern Canada annual church gathering. The Brnjases work in churches in Kitchener, Ont., and attend The Gathering Church. Faludy and Kissor are from the Jane Finch Faith Community in Toronto. (Photo by Dave Rogalsky) 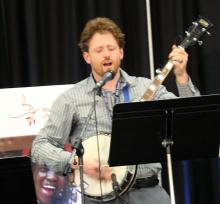 Mennonite Church Eastern Canada executive minister David Martin, with hand raised, prays for the Jane Finch Faith Community Church during the area church’s annual church gathering on April 25 after church members learned of a fire in the building where the church meets to worship and where many members live. (Photo by Dave Rogalsky)