Exploring responses to TRC’s Call to Action No. 48 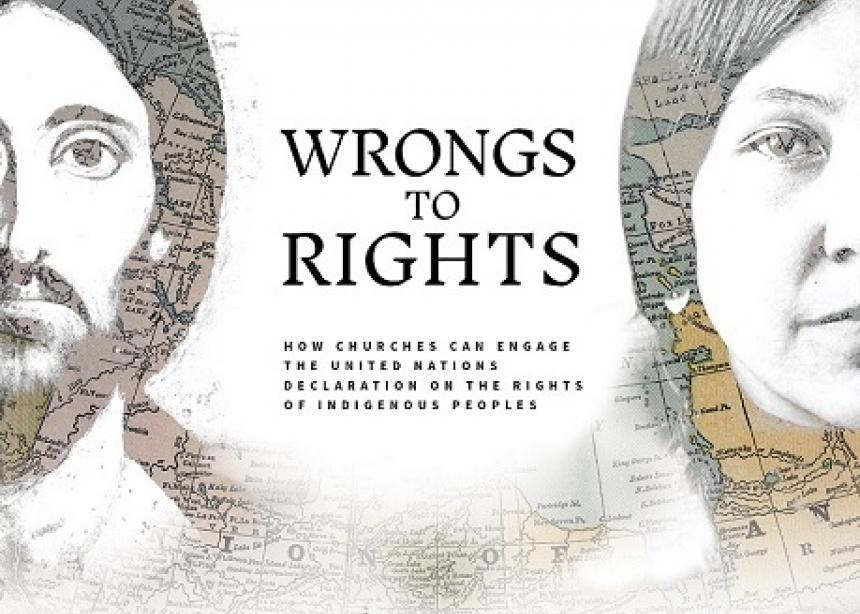 Steve Heinrichs is passionate about healing broken relationships between indigenous and settler peoples. As Mennonite Church Canada’s director of indigenous relations, he is committed to responding positively to the Truth and Reconciliation Commission (TRC) Call to Action No. 48: Adopting and implementing the United Nations Declaration on the Rights of Indigenous Peoples.

But he also wrestles with how to do that.

“If we are going to truly honour indigenous rights and build mutual relationships with indigenous sisters and brothers—let alone indigenous nations—we have to raise awareness about the need to recognize indigenous rights, what those rights entail and how this can nurture healing and hope for all of us,” he says.

That concern prompted the publication of “Wrongs to Rights,” a 164-page, special edition of Intotemak magazine that explores how church groups can act on the Declaration and Call to Action No. 48.

“To be honest, I would say that 95 percent of us in the church never knew about the Declaration before the TRC lifted it up in their Calls to Action this past year,” he says. “So we’re in the process of educating ourselves. This will take time.”

When the TRC submitted its final report in June 2015, it offered an executive summary stating that “Canadians must do more than just talk about reconciliation; we must learn how to practise reconciliation in our everyday lives—within ourselves and our families, and in our communities, governments, places of worship, schools, and workplaces.”

It also submitted 94 Calls to Action summoning all of Canadian society—including government, health, legal, media, and faith institutions—to adopt the Declaration as a blueprint for reconciliation.

Churches from all denominations and other faith groups were invited to issue a statement no later than March 31, 2016, stating how they will comply with and implement the Declaration. “Wrongs to Rights” was published ahead of that deadline as a first step in responding.

With contributions gleaned from a wide array of respected indigenous and settler leaders, thinkers and activists—from TRC chair Murray Sinclair to theologian Walter Brueggemann—“Wrongs to Rights” has real potential for inspiring Christians across the ecumenical spectrum.

Some Christian groups have issued statements agreeing to embrace Call to Action No. 48 and its summons to adopt the Declaration. The Evangelical Fellowship of Canada, of which Mennonite Church Canada is a member, instead acknowledges a commitment to respond to the call through education. This posture is similar to the one that Heinrichs envisions for the Mennonite Church Canada family.

“We have pockets of people who are aware of past and present colonial realities, people who would like to see their congregations honour the indigenous rights recognized by the Declaration,” says Heinrichs. “But there are other pockets of people—the majority in fact—for whom this conversation is new terrain. “Mennonite Church Canada can’t publicly commit congregations to an embrace of the Declaration if they don’t know what it is about, and why it’s both necessary and life-giving. That wouldn’t be fair to them, and, more importantly, it wouldn’t be honest to Indigenous Peoples [in Canada] to say we are fully on board, when we really aren’t there yet. We need to engage our faith family in a significant, broad-based conversation so that we can eventually move forward together. My prayer is that ‘Wrongs to Rights’ will be one of the tools that we can use to move that process along.”

To hear more from Heinrichs about the TRC’s Calls to Action and the Declaration, listen to Church Matters Podcast: Episode 107: Truth and Reconciliation Commission Summons Churches. Purchase a copy of “Wrongs to Rights” at http://www.commonword.ca/go/507.

Intotemak, which means “my clan” in Ojibway, is a quarterly magazine that seeks to nurture indigenous-settler relationships of respect, kindness and solidarity. 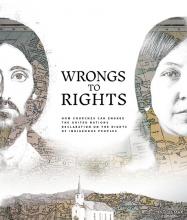