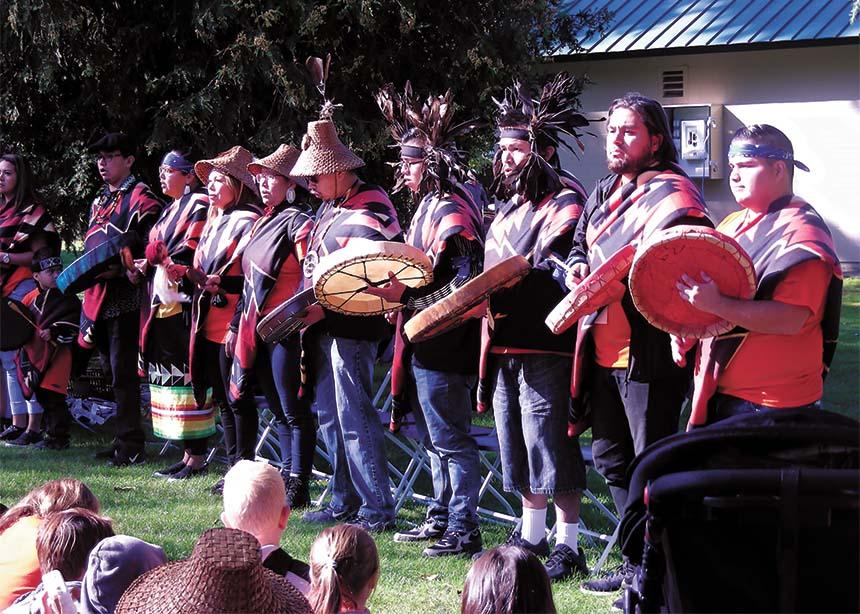 Members of Mennonite Church B.C. congregations were among those who heard First Nations drummers on Orange Shirt Day in Abbotsford in 2018, supporting children who survived residential schools in the past. MC B.C. continues to support relations with First Nations of B.C. through a statement of land acknowledgment now posted on its website. (Photo by Amy Rinner Waddell)

In the spirit of reconciliation with Indigenous Peoples of British Columbia, a statement of land acknowledgment has been adopted by Mennonite Church British Columbia. It states: “We respectfully and gratefully acknowledge that we gather on the unceded, traditional and ancestral lands of Indigenous First Nations.”

Earlier this year, the MC B.C. Indigenous Relations Task Group began working on such a statement. It was presented to the regional church’s Leadership Board and accepted on Oct. 21, and is now posted on the MC B.C. website and on its letterhead.

Given that MC B.C. churches are in different locations in the province, the statement is geographically general. “Once it is determined which First Nations traditional lands all our congregations are located on, the MC B.C. website’s list of congregations will also include this information,” says Henry Krause, chair of the Indigenous Relations Task Group.

MC B.C. land acknowledgment dates back to 2014, when Brander McDonald, an Indigenous Relations worker at the time, challenged the regional church to recognize First Nations on whose land their buildings are located. Some individual congregations have done so, including Langley, Peace and Emmanuel Mennonite congregations.

“Since MC B.C. started the ‘Partners in Reconciliation’ project with [Mennonite Central Committee B.C] two-and-a-half years ago, Bridget Findlay [MCC B.C. Indigenous Neighbours coordinator] became part of the MC B.C. Indigenous Relations Task Group and has been working with our MC B.C. congregations,” says Krause. “She has worked with a number of our congregations as they have thought through what a statement could look like for them.”

Findlay, who had been consulting with Indigenous communities, also gave input to the Indigenous Relations Task Group, as it worked on the statement for the regional church.

“The plan is to determine how best to use the statement for various situations, such as annual meetings and other gatherings,” says Krause. “The intention is to recognize our responsibilities as guests on the traditional, unceded and ancestral lands we meet on, in order to pay respect to those on whose territories we are on.”

The Indigenous Relations Task Group’s web page on the MC B.C. website has a section on land acknowledgement statements and why they are important to have, how to write one and what should be included in a statement. The statement on MC B.C.’s website explains that the purpose of a land acknowledgment is:

Mary Berg of the MC B.C. Leadership Board says her journey with the topic of reconciliation began in 2013, when she and her husband attended a day of Truth and Reconciliation meetings in Vancouver. Hearing the stories of residential school survivors was unsettling for her and was the beginning of finding her place in the story.

“Horrible things were done by the church; I am part of the church,” says Berg. “I believe that we need to listen to the voices of the people who were harmed, and many Indigenous people have identified land acknowledgement statements as a simple but important step toward reconciliation. I want to be part of a church who chooses to engage with the ugly parts of our history in order to be part of a process that moves toward reconciliation. I see this as the way of Jesus.”

This article appears in the Nov. 22, 2021 print issue, with the headline “‘The way of Jesus.’” Do you have a story idea about Mennonites in B.C.? Send it to Amy Rinner Waddell at bc@canadianmennonite.org. 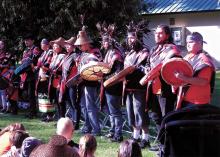 Members of Mennonite Church B.C. congregations were among those who heard First Nations drummers on Orange Shirt Day in Abbotsford in 2018, supporting children who survived residential schools in the past. MC B.C. continues to support relations with First Nations of B.C. through a statement of land acknowledgment now posted on its website. (Photo by Amy Rinner Waddell)