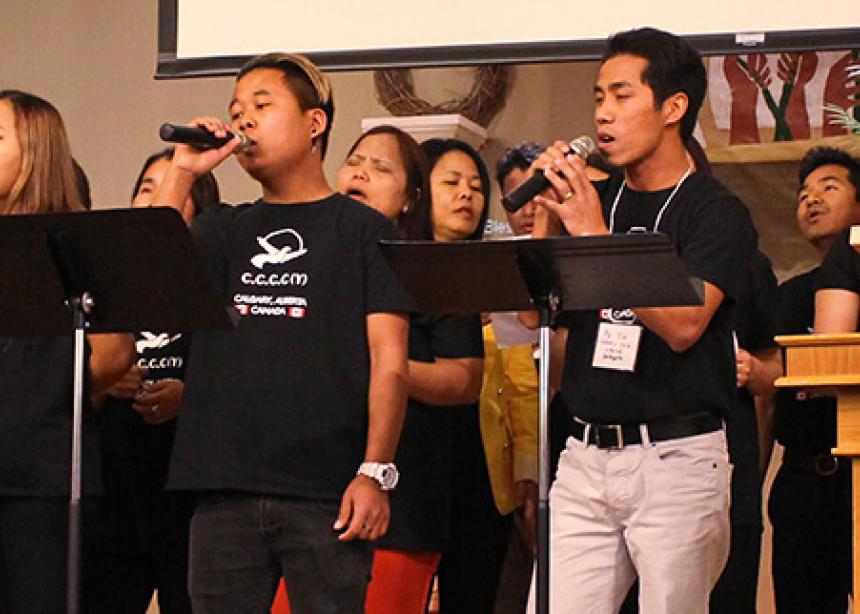 “Take heart, it is I. Do not be afraid.” Chuck Neufeld’s confident voice set the tone for the 2016 Mennonite Church Alberta delegate assembly as he sang the theme words from Mark 4:50.

Assured that where Christians gather, Christ is near, discussions at the annual general meeting were frank but constructive. Concerns around possible implications of Mennonite Church Canada’s Future Directions Task Force report dominated both the assembly and the pre-assembly meeting of pastors. As the smallest area church, Alberta feels particularly vulnerable when considering a decentralized organization.

Chau Dang, pastor of Calgary Vietnamese Mennonite Church, summarized what was on many minds when he said, “How much difference does Alberta make?”

MC Alberta—unlike the area churches in British Columbia, Saskatchewan and Manitoba before it—did not “approve in principle” the Future Directions report at either of its General Council meeting on Feb. 6 or its delegate assembly, held on March 18 and 19 at Foothills Mennonite Church in Calgary. General Council concerns included:

Issues expressed during delegate discussions added to these:

With “competing priorities by area churches, how will this thing work?” asked Marvin Baergen from Trinity Mennonite in DeWinton, adding, “I don’t like the idea of short-term mission.”

Willard Metzger, MC Canada’s executive director, responded to questions throughout the day. In response to a concern that restructuring is driven by finances, instead of vision, Metzger replied, “Our commitment is to make sure whatever structure is envisioned is what we can afford. . . . [The proposal] is not driven by finances, but it is the reality that brings the discussions on. . . . Every denomination is doing the same thing.”

A motion to accept the Future Directions report was replaced with one that said, “[I]n light of the number of significant concerns that have been expressed, we are not ready at this point to approve the report and all of the directions and details proposed. We understand that our concerns have been recorded and will be shared with the MC Canada board. We continue to be in support of current MC Canada and encourage congregations to continue their financial support.”

The amended motion was carried unanimously at the delegate assembly.

Financial and other matters

Finance Committee chair Bill Janzen introduced MC Alberta budget discussions by saying, “It is a good news story. Even with the economy the way it is . . . annual numbers for 2015 are good. The projected budget will remain on the positive side.”

MC Alberta ended the fiscal year with a small surplus. One adjustment to the 2016 budget came near the end of the March 19 business session. Barry Andres, chair of the Camp Valaqua board, commented that the camp was budgeting a $6,000 deficit for this year. He made a motion to add an extra $5,000 for Valaqua, to realistically reflect projections. The motion passed with one vote against.

Other highlights of 2015 included:

Assembly came to a close with a commissioning service to bless those coming on to committees and thank those finishing their terms. Dan Graber, MC Alberta’s area church minister, got a little emotional as he thanked those who were finishing, remembering good discussions, arguments and learning together. “The last five years have been rewarding and have advanced my life and faith,” he said. “Thinking about moments that I treasure . . . moving a General Council meeting outside on a beautiful day, I remember thinking it matched the people I was with.”

Ernie Engbrecht of Lethbridge is the outgoing moderator. Dan Jack of Calgary First Mennonite replaces him.  There are currently four vacancies on the Congregational Leadership, Mission and Service, Community Building and Finance committees.

See reports of the annual meetings of other area churches: